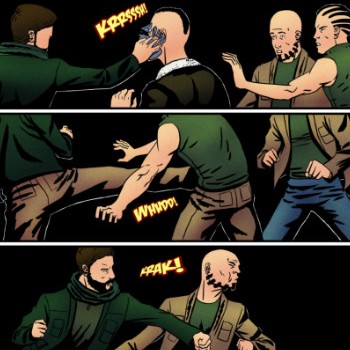 Hey there comic fans! Welcome back to our review of another indie title, this time it is in webcomic format. In my opinion, the webcomic style is very underrated, with some of the best, funniest, and most memorable stories being told for free by clicking next. This review was submitted to me by Conan Sinclair, an artist who has actually done a little work for Psychosis as well, and an all-around good guy. 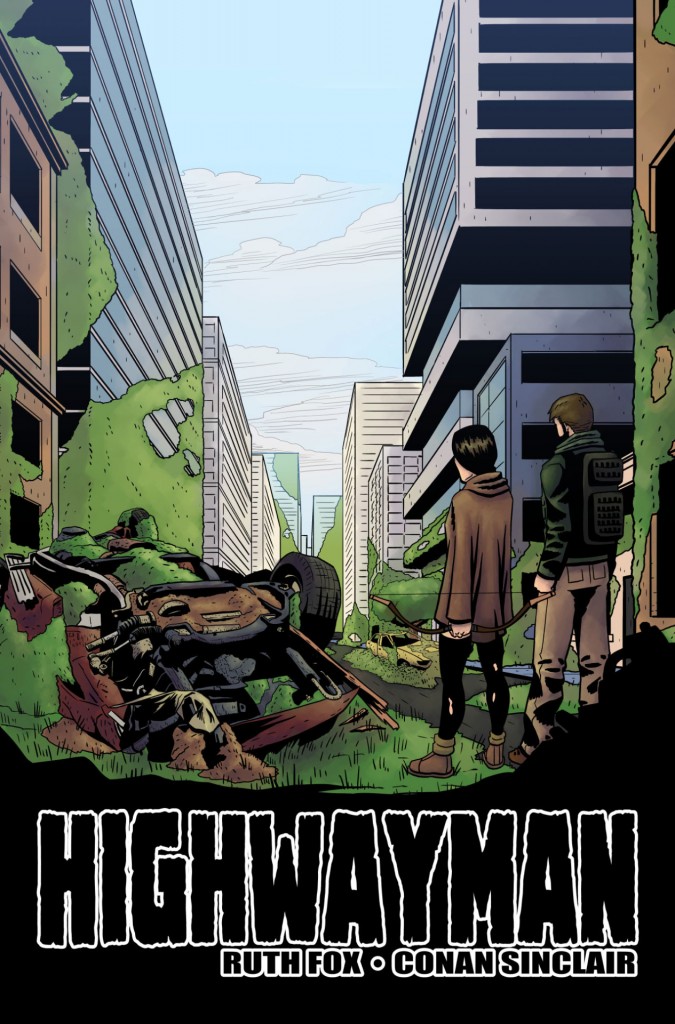 The story revolves around Highwayman as he tries to survive in our post apocalyptic world. With water, food, and resources extremely limited, humanity is just trying to do the one thing we are good at, survive. Our story starts with Highwayman (I’m using this as his name, as no one has found it out yet) coming into a trade tavern and trading batteries for filling up some containers of water. In walks Jo the waitress at the tavern, a sassy firecracker, who will not let anyone push her around. A really strong female character, but one who has never had to survive on her own. She confronts, what it turns out, is a gang leader of sorts, causing Highwayman to get involved. This leads to a unique adventure, with a unique friendship possibly brewing.

Honestly, that is all you are getting, so you can go and give it a read. So far, the whole story will take you about twenty minutes to get through, but that makes it refreshing so far, as you get to follow a relatively new comic as it develops.

The writing in this story is actually pretty good. I am impressed with the story development so far, and there is a lot of twists and turns to keep me guessing. Not many stories do that anymore, with so much cookie cutter stories being done. It is refreshing to see a post-apocalyptic story that (so far) does not use mutants, zombies, aliens, etc. and instead showcases how real humans would act in the end of the world.

The character development is good, and we quite often see cracks in the armor of our main character. While he may act like a tough guy with no emotion, he showcases a soft side at random times.

My only critique is that his personality is constantly contradicting itself a lot, which may throw readers off so early in a series. There is not such an air of mystery mainly because we see too many flashes of his sordid past. Sometimes a little less shown, makes a lot more emotion in the future. 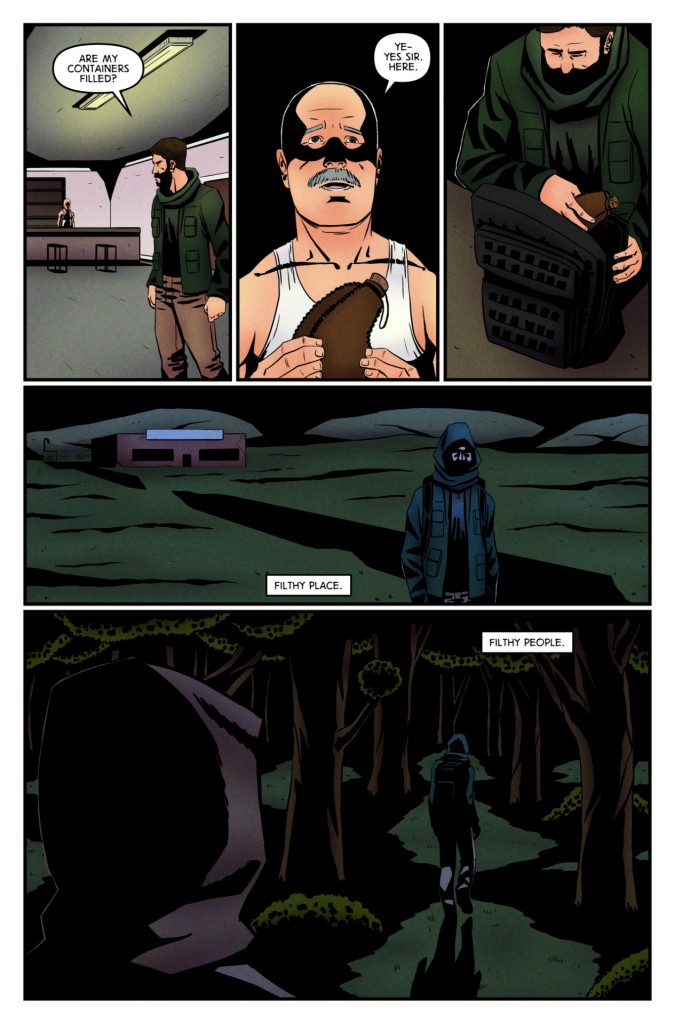 The artwork is a nice and easy style, with a lot of focus on the characters, and less focus on the background. Each character is defined clearly, and you can see some subtle differences used in tones, shading, and basic art, but the overall feel is very dirty (gritty) which is almost needed for this type of story.

I do have to say, I was not a fan of the art when I first started reading this story, but as I continued not only did the art get more refined, and overall better, but I also started to actually love the art for what it was. It is simplistic, yet hits all the right marks. I am fairly comfortable that Sinclair will continue to grow, and as he does, we will see major changes to the overall feel. I will always rate progression as well, because that is the goal for any story and any artist, is to get better as you go.

Also a MASSIVE kudos for being the one artist to do it all. I have spoken with many artists, my own main guy included, and doing all of the work (shading, colouring, drawing, lettering) on your own is not an easy task to face.

The story is clean, the art is a nice breather, and I am seriously interested in seeing what they have in store for the future. I am actually glued to this one, and keeping an eye on the blog each time a new update comes out.

Lets see what Conan Sinclair had to say about this creation!

The idea for Highwayman came from a long love with post apocalyptic fiction and is inspired by books like The Road, Earth Abides and the Dark Tower series.

The comic is a collaborative process by my wife Ruth Fox and myself. I start by creating a very loose plot that I then send to her. She then works her magic and turns the mess I sent her into a masterful script. I then go to work in Manga Studio where I pencil, ink, colour and letter the comic.

The best advice I could give anyone would be two fold. First, create, the more comics you create the easier creating comics will be. You have to start AND finish comics so start small but start now! Secondly, study, if you’re an artist then study anatomy. Study artists that inspire you. If your a writer study authors that inspire you but put time aside every day for study.

Highwayman can be read at highwaymancomic.tumblr.com If you enjoy reading Highwayman then you can support us on Patreon where you can get behind the scenes and see how the comic is created https://www.patreon.com/highwayman

Thanks Conan for taking the time to speak with us, and thank Ruth for writing a story I am going to stick with!