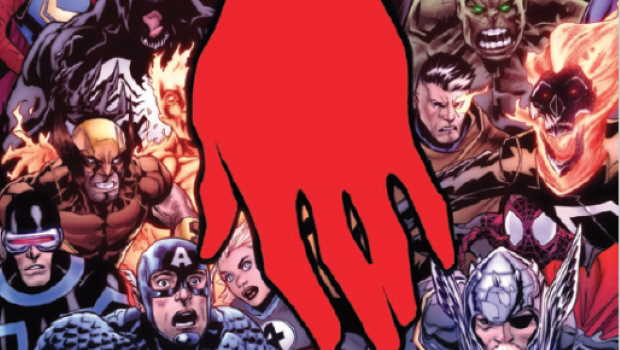 Summary: A mysterious murder that will bring many heroes paths together, may just hold the key to what the marvel universe is set to experience in 2020.

For those who have been following Marvel’s 80th comics, this format will be quite familiar. A mysterious murder has occurred, the task of solving it gets passed from one super hero to another, slowly uncovering what happened and what it will mean for the future of the Marvel Universe.

I kind of like the way the task of trying to solve the murder goes from one hero, or group of heroes, to another because it does a great job of showing that they are all living within the same extended universe. Whilst one hero might be too busy to devote much time to trying to solve the case, they can pass it to another who might have a bit more free time… or at least who can add their help to unraveling the mystery while taking care of their own problems. It shows the wider world of heroes whilst not getting bogged down with any one hero or heroes but at the same time showing enough of each person or group that is encountered to make it feel like they are indeed living a complete life at the same time as all the other heroes.

Much like the sharing of the story between heroes gives us a good glimpse into different hero lives… the art work hand off does a similar job for the artists. Each new baton pass is accompanied by a new art style, some more drastic than others. This both helps to keep the pages looking fresh and also to give people a preview of what to expect in the pages of the comics related to the given heroes (which is obviously what these comics have been, a quick sampler utilizing a shared story to promote the different properties within the Marvel Universe). Some of the artwork is just absolutely striking, my favourite of the lot would be the segment for Jessica Jones which if I’m reading my end credits correctly, was by Kelly Thompson & Mattia De Iulis.

Some people won’t like these comics because they don’t focus for long on any one hero/group but I think they are an excellent way of giving people a quick taste of what many of the heroes of the Marvel Universe are like, a feel for the art style and the writing they can expect when they buy their own story arcs. It’s not a bad story itself so even if you just want a bit of a murder mystery it’s still a bit of fun. If you’ve been following the Marvel 80th stories I’d say grab this one to continue your collection, if you want a heads up as to what might be set to occur in 2020.. again, probably good to grab this. If you just like a bit of variety in your comics, this is a good choice. So basically I guess I’m saying, grab a copy :)