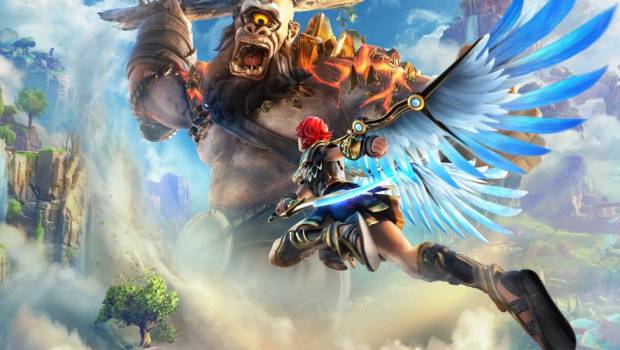 Summary: Immortals Fenyx Rising doesn't do anything you haven't seen before, and unless you're married to this particular style of game, it's hard to recommend.

I’ve had quite a hard time reviewing Immortals Fenyx Rising, the latest Ubisoft open world adventure that takes a more playful approach towards mysticism than the dour Assassin’s Creed series. Throughout my twenty or so hours with the game I was constantly asking myself who was this made for? Is it a kids game? Is it supposed to be one of those Pixar movies where adults will get the hidden subtext but kids will just enjoy the ride? The gameplay itself isn’t overly complicated, but has a surprising amount of depth to expand upon. The writing. Well… I really didn’t like the writing.

The core conceit of Immortals Fenyx Rising is fine. The evil force Typhon has escaped their prison to unleash his power and claim the throne of Olympus for themselves. They are hell bent on wiping out Zeus in the process, who is seeking the help of Prometheus to save the Golden Isles.
This sounds really epic, but it plays out more like a slow crawling train wreck, filled with awkward narration, pitiful attempts at humor, and bouts of serious frustration as I rolled my eyes so very, very, harshly. Prometheus predicts that a mortal will rise up to save the Gods from Typhon’s tyranny,  and at that very moment Fenyx washes up on the shore to find her brother and crew have been turned to stone. Vowing to save them, you set out as  the self-proclaimed storyteller ready to go on the adventure of a lifetime.

Tonally, this game is all over the place, and not in a good way. Zeus and Prometheus are supposed to be this quirky loveable duo, but their attempts at humour are not even juvenile, they are just plain bad. There’s even a time where they allude to someone’s genitalia being cut off, or patting themselves on the back for being progressive by retelling a classic myth featuring a non-binary baby, which immediately ruins the genuine sentiment here in my opinion. Then there’s moments where things are looking very somber, only to completely change gears with an idiotic quip from the narrators.

I just really don’t understand who Zeus and Prometheus are talking to as the game rolls along. As you are completing your mission to rescue the gods, the duo is feverishly feeding you the tale of that current god, and how they ended up in that predicament, which feels like it’s aimed more towards kids. But then they are making stupid stoner…. Lines…. I’ll call them lines, because they sure as hell aren’t jokes. Now, I’m perfectly aware that not every game needs a great narrative, but Immortals is constantly forcing it to center stage that it becomes a huge problem for me personally. Now if you’re watching these clips and aren’t groaning uncontrollably like I was, then perhaps this isn’t going to be an issue for you. For me however, the fact that they force these lines front and center every time anything of note happens, it really made me focus on just how bad this aspect of the game truly is.

What makes it such a big problem is that for the most part, Immortals is an enjoyable game to explore. It’s lush open fields and fragmented towns across the Golden Isles are an absolute joy to wander through. Unlike the Assassin’s Creed franchise which often features big open spaces with very little to see, my attention was constantly being pulled away as I wandered around finding hidden chests, completing navigation challenges, picking up shrooms and flowers to craft potions. It’s easy to head towards a certain quest, and end up on the other side of the island as you go down the rabbit hole of seeing something on the horizon that just demands your attention. Getting lost inside Immortals was a great feeling, a feeling that I haven’t felt since 2017’s The Legend of Zelda: Breath of the Wild.

There’s no denying the impact that Breath of the Wild has had on the design of Immortals. It has a cold open that forces you to complete a series of objectives for a good hour before you leap from a great height and fly your way into the real map with some newly acquired wings, much like the opening to Breath of the Wild. It features some magical bracers that allow you to magnetize small metal cubes, or move boulders and heavy rocks. It allows you to tame wild horsies to use as your majestic steed. There’s gliding, potion crafting, climbing, stamina, and puzzle vaults that are awfully reminiscent of the Shrines in Zelda. Yes. Immortals is a lot like Breath of the Wild, but it also feels like a completely different game. They both have very different flows, intentions, emotions, and nuances. Instead of throwing it under the Genshin Impact sized bus and screaming “copy cat”, we should be celebrating the fact that Breath of the Wild has become the gold standard for open world games, and that hopefully more in this largely stale genre borrow similar ideas as we move forward.

But Immortals is still a Ubisoft game, and if you have played any of the Assassin’s Creed games of late, you’re going to feel right at home here. There are menus upon menus awaiting you for a myriad of upgrades including your skills, God Powers, upgrading your weapons and armor sets, stamina and health, potion effectiveness and bonus, and probably a few things here that I’m forgetting. Once again, keeping in mind that I’m still not sure who this game is for, kids or adults, this is yet another area where Immortals feels unbalanced. Here are all these menus that I’ve come to expect from this specific brand of open-world adventure, but the options are so limited. For example, there are no new weapons to equip per-se. Instead you will collect skins for your existing weapons that will offer a change of cosmetics and a small buff that will activate as a result. If you collect a whole set, that buff will increase, but don’t expect to find some crazy new weapons because… that just ain’t happening. 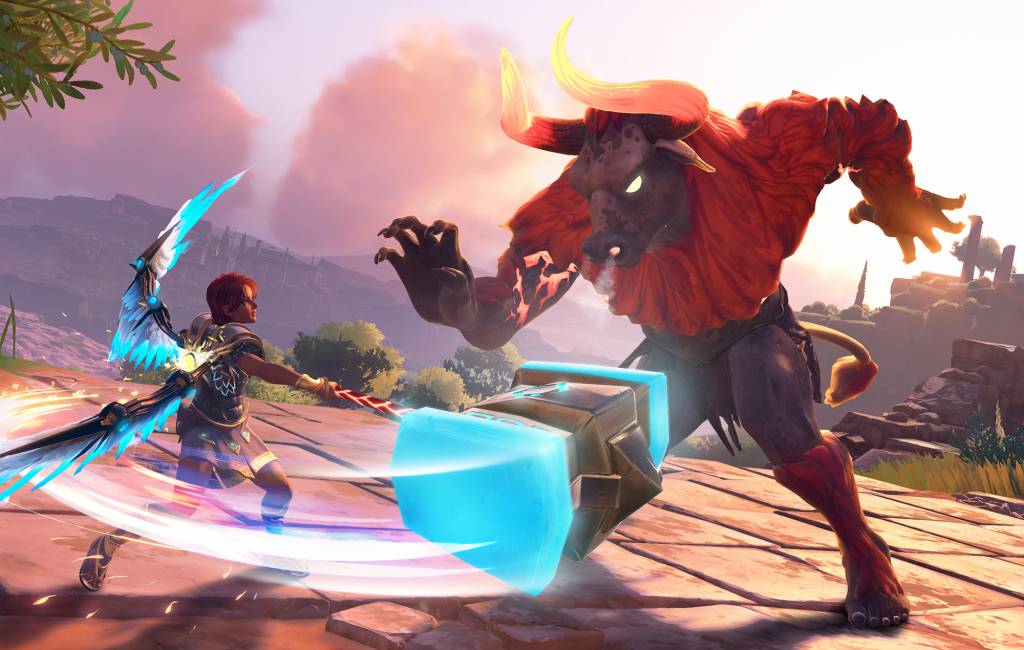 The Vaults, deep pits that take you to the depths of Tartarus to solve the puzzle dungeons for the glorious rewards, and a stack of Zeus’ lightning which can be used to upgrade your stamina. These Vaults are some of the simultaneously the worst moments of Immortals in my mind. Some of these vaults are super creative, with fun and exciting puzzles to solve and they leave you feeling accomplished and ready to seek out the next one. Then others are just…. bad game design. One such example is a temple that forces you to hit switches in a particular pattern, with no markings or guidance, while avoiding fireballs, all in the name of fun. There’s no strategy here. It’s brute force. It’s also a good twenty minutes of unimaginative time filler, that ultimately lessens the experience I pulled away from the really great puzzles that some of these Vaults displayed. It’s a shame, because there are handful of vaults here that really knock it out of the park, but a significant chunk also just flounder on the borders of banality and frustration.

The combat of Immortals is also just…. Fine. You have your sword for light attacks which also start to rebuild your stamina with consecutive hits. Your heavy attack uses your axe, which does a touch more damage but more importantly, fills out an enemy’s stun bar which will render them useless for a short while. There’s also a dodge, and your parry system, and using your God powers to shoot magical arrows, throw heavy rocks, smash with a hammer or call in support from an undead bird offer enough variety to keep things interesting, but it’s not doing anything new either.

And that’s ultimately where I ended up on Immortals Fenyx Rising. This game doesn’t really do anything. It’s narrative is tonally shifting all over the place that I’m quite unsure who would find it interesting, let alone entertaining. It’s combat and upgrade systems are toned down from more competent competitors in the same space, and its inability to gain consistency of creativity within the Vaults is a missed opportunity. It’s world is utterly gorgeous, and honestly is perhaps one of the best open worlds that Ubisoft has ever created. It’s such a shame that its humdrum gameplay and asinine storytelling just left me wondering why I was spending so much time hating such a wondrous mythology. The ingredients for a really, REALLY great game are here, but somehow they just never come together. It feels like the designers played Breath of the Wild, really liked the art style of Fortnite, and they tried to make some kind of mashup using all the research they had gathered from the making of Assassin’s Creed Odyssey into a game. The strange this is it almost works, but it just doesn’t get there for me.

That might sound a little harsh, but in all honesty I wonder who I would recommend Immortals Fenyx Rising to. If you have children or young adults around you and you’d like to connect over a game that the whole family can play, this is definitely a safe bet. If you’re not put off by the narrative that I’ve described here, and are looking for a decent time filler to round out your year that will put you inside a nice looking world, then yeah, this could work for you. However if you don’t fit into those two groups, I think your time would be best spent playing something with a little more meaning.