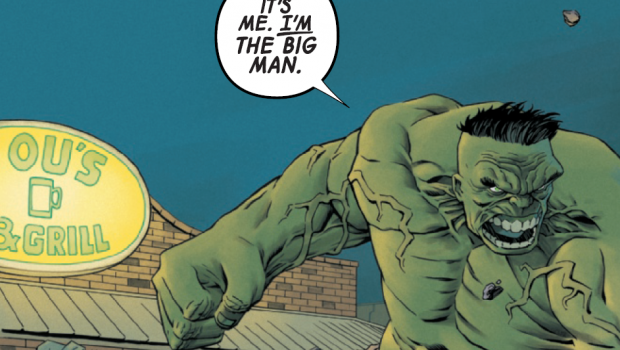 Summary: Worth a look if you want a self-contained story and not having to read a bunch of other issues to get what is going on.

In what they used to call a “one shot” story, Bruce Banner finds himself at random places around the desert after Hulk leaves him there. Seemingly Hulk has turned into a werewolf for some reason. In order to hide out Bruce is working a dish pig at a grubby dinner where they don’t mind him turning up without any shirt or shoes and ripped pants every morning.

Everything changes when a visitor from his past shows up at the diner unexpected and forces to examine what the Hulk is doing to him.

Given the complex storylines of these comics and the need to read dozens of issues for multiple characters to work out what is going on sometimes it is refreshing to just have a self-contained story.

The artwork is nice and clean and very Hulk like with even the “Gamma” antagonist not being over the top.

There is a Hulk smash scene, but most of the story examines stuff about Bruce banner’s past and what the Hulk is trying to tell him. There are multiple scenes of the aftermath of Bruce trying to end his life and the Hulk is the one who “spits out the bullet”.

If you are a fan of this character then you would have a lot of issues of different Hulk stories already, not sure if any of this was referenced in any other stories. For the more casual fans it is worth a look.