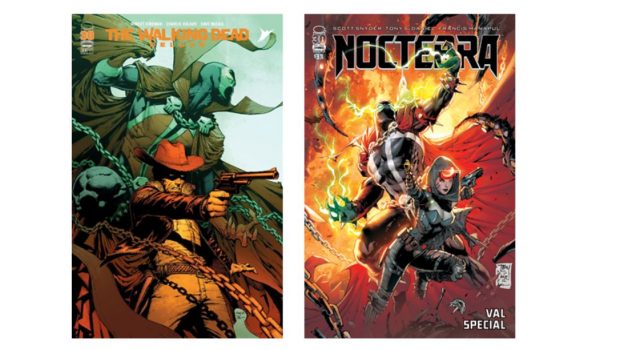 Spawn will stop at nothing this December. Todd McFarlane’s iconic, history-making, record-breaking Spawn will be everywhere next month and will appear on over nearly 50 different Image Comics series’ covers in addition to popping up on many DC variants as part of the Batman/Spawn crossover launch.

This year marks the 30th anniversary of Image Comics—and of Spawn’s launch—and December’s Spawn team-up covers provide fans with the perfect way to celebrate the beloved character’s lasting impact and influence on the medium. Everywhere customers look, there Spawn will be.

Spawn will make an appearance on the covers of:

Longtime Image fans won’t want to miss out collecting them all this season in celebration of this milestone anniversary.

Todd McFarlane’s Spawn is one of the world’s bestselling and longest-running monthly creator-owned superhero comic books, with hundreds of millions sold worldwide in more than 120 countries.

The road to McFarlane’s history-making comic run began in 1992 when he co-founded Image Comics and released Spawn #1, still the single-best-selling issue all-time for any creator-owned comic, selling an astonishing 1.7 million copies—which was an unprecedented feat for a creator-owned comic. Also, the comic became an Emmy Award-winning animated series on HBO and a live-action feature film that grossed more than $100 million.

Then, in 2019, McFarlane made history with the publication of Spawn #300 and record-breaking Spawn #301. These milestones have earned McFarlane the Guinness World Record for the world’s “Longest-running Creator-owned Superhero Comic Book Series.”

After garnering unheard of success in the comic industry, McFarlane launched McFarlane Toys, one of America’s top action figure manufacturers. McFarlane Toys has become an industry leader, redefining the action figure market’s standards and a licensee of world-class brands and leading global franchises. Under McFarlane’s creative direction, McFarlane Toys action figures and toys are consistently on the “Best Seller” and “Top Toy” lists at national mass retailers, including Target, Walmart, and Amazon.com. Spawn and all related characters and elements © & ™ TMP.