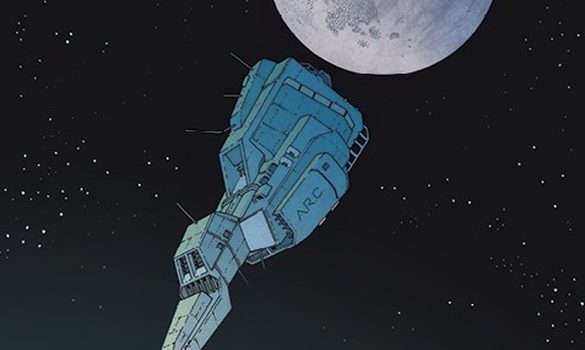 Summary: This issue is delightfully creepy!

Ice Cream Man is a horror anthology book, and I can best describe it as ‘Delightfully Creepy’.  Most issues are completely unconnected, with this issue being a slight exception.  This one ties back into part one of the Hopscotch Melange stories.  This one has a very alien feel to it, with the horror stemming from a mix of isolation and the unknown.

The art in this book continues to be the comic equivalent to an episode of The Twilight Zone.  The book looks great, and the background of space as it is drawn here feels both expansive and incredibly lonely.  The appearance of the stars, asteroids, and moons evoke the cold aloofness of space.  The whole artistic feel of the issue is meant to evoke loneliness, and really drive home the point that our main character is alone in the universe aside from an A.I. that he travels with.

The ship feels rather stark and sterile, with the interior being either a stark white or a dull grey.  Certain working parts of the ship show aspects of the technology involved.  But I feel that the decision to keep the ship’s interior stark was meant to create an atmosphere of loneliness.  This helps drive the narrative as the issue progresses. 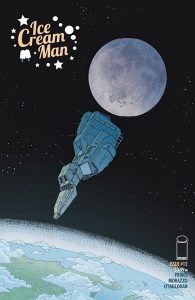 This final issue of the Hopscotch Melange story takes place in space.  A lone man is travelling through the cosmos, looking for a seed planet to bring life to a new Earth.  The story feels like he has been travelling for a long time, with only an A.I. for companionship.  In the early stages of the book the A.I., known as bOb, is monitoring Noah, and the narration it provides drives home that our protagonist is lonely.  He is driven by the thought of potentially reclaiming his family, and maneuvers through a space-spider infested asteroid field driven by that thought.

The issue really picks up when they discover they did not escape from the asteroid belt unscathed.  A spider has made its way on board.  The battle leads to the ship being damaged and crashing on a nearby moon.  Noah and bOb survive unscathed, and quickly discover human signals being broadcast from nearby.  Rather than carefully investigating as per bObs recommendation, Noah springs into action to investigate.

Upon arriving at the site of the beacon, Noah discovers not a human, but the being that was intent on destroying the world in Part One.  Yes, it’s the Ice Cream Man.  He discovers that three others had made it to this moon previously.  All three of these previous visitors now dead and decayed.  When asked why they were killed and not him the Ice Cream Man replies simply: None of them had a map.  This is where the true panic overwhelms Noah, and he attempts to flee back to the ship.

The way this issue ends is like a classic twist out of a Twilight Zone episode, and I absolutely loved it.  W. Maxwell Prince creates such a great narrative and then subverts expectations.  Honestly, this issue would make an excellent episode on a horror serial show.  Its structure is damn near perfect.

This book is incredibly well done.  Ice Cream Man is consistently one of the strongest horror books out there today.  The creative team works so well together to create these unsettling tales that are beautifully rendered in the artwork.  Some scenes are unsettling, but not in a needlessly gross kind of way.  Martin Morazzo is more content to make things steadily more unsettling as each individual one progresses on, until the payoff at the end.  This couples perfectly with Princes’ writing style and makes for a fantastically creepy read.

This issue is delightfully creepy! 5 out of 5 stars!