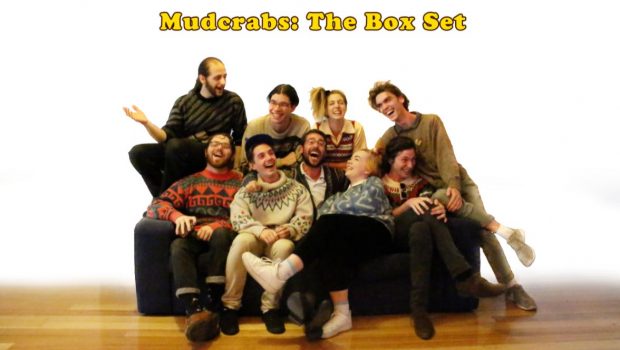 We catch-up with Ian from The Mudcrabs: The Box who are currently performing at The Melbourne International Comedy Festival 2017. So relive the magic of university comedy’s golden era with this limited edition Mudcrabs: The Box Set and enjoy this interview with Ian!

What drew you to comedy?

Tell us about your style of comedy?

I’ve been cast as a hypermasculine alcoholic in most of the sketches. Make of that what you will.

If you’re a Game of Thrones fan… how could you turn the disaster of the Red Wedding into a joke?

Describe your show at the Melbourne International Comedy Festival?

It’s a sketch show. It’s a show with sketches. Most of them are arguably funny.

When my father left I didn’t know what to make of it. I guess I turned to humour as a way of avoiding my real emotions. Every night I would stay up late with a torch, reading joke books and crying myself to sleep. My therapist says that somewhere deep down I believe that if I’m funny, people are less likely to leave me. I’m also a big fan of Louis CK.

What are you most looking forward to performing at MICF this year?

Cheap drinks at the Festival Club. And like friendship or whatever.

Anything to be nervous about?

I’m in a show. You should come. I hope my train doesn’t stop at South Kensington.

Check Mudcrabs: The Box Set out at https://www.comedyfestival.com.au/2017/shows/show-show or worship them on Facebook at https://www.facebook.com/MUComedyRevueBoard