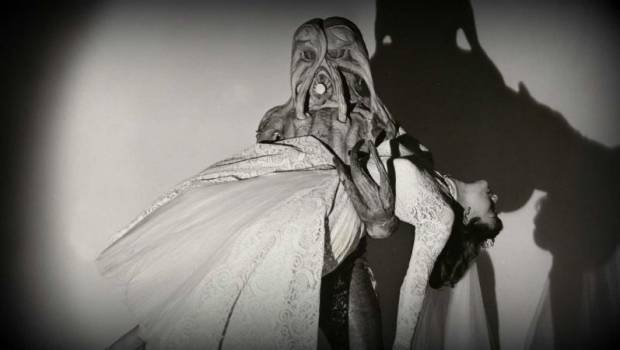 I Married a Monster from Outer Space (1958) Blu-ray Review

Summary: The evil Space Communists are looking to hook up with Earth babes due to their planet being destroyed and all their women dying.

The evil Space Communists are looking to hook up with Earth babes due to their planet being destroyed and all their women dying. Due to genetic incompatibility they can’t breed with Earth women but say “they are working on it”. Our hero Marge (Gloria Talbott) suspects the man she married Bill (Tom Tryon) is not really her husband as he stopped drinking and seems strange soon after their wedding. The old story of her trying to get help but all positions of authority being taken over by aliens is pretty much the same story as Invasion of the Body Snatchers.

The plot also reminded me of The Mysterians “love-hungry space men come to seize our women so that their dying race may live” but it is par for the course with these low budget 50s sci fi movies. It was originally meant to be on a double bill with the Blob but ended up screening off by itself as colour movies were bigger by then.

Gloria Talbott is my favourite in this as at least she shows some emotion and doesn’t walk around like a stiff. I swear Marge from the Simpsons must have been named after this character.

The film did not get very well received at the time and has only just been released on bluray. It’s not really bad, but don’t go expecting something deep and meaningful from it. The transfer looks pretty good, only goes soft looking in a couple of scenes that I can notice.

I do love hearing about the dogs that they used wanted to play with the costumed aliens instead of attacking them. They had to train them just to grab the hose on the costume to make it look like they were attacking. Reminds me in Cujo the trainer used the dog’s toy to get it to try and break into the car and they had to tie its tail down as it looked too happy.

While by no means an essential watch, but if you are a fan of 50s sci fi movies and want something fun then check it out.