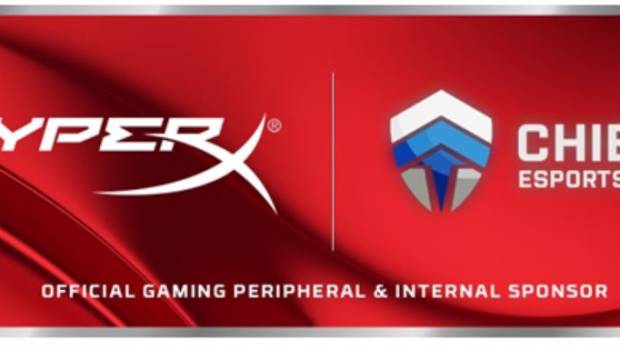 HyperX, the gaming division of Kingston Technology, today announced its partnership with four-time OPL champion The Chiefs Esports Club as official gaming peripherals and internals sponsor. HyperX will provide players with best-in-class peripherals during all live gameplay, helping them to game with a competitive edge.

Formed in 2014, The Chiefs quickly grabbed huge success by becoming the champions of OPL in 2014, 2015 and 2016, and became the most well-known esports club across Oceania. Moving on to the new decade, The Chiefs is ready to show its superior strength and once again dominate the OPL.

“HyperX is a real leader in performance-driven gaming peripherals and equipment so we’re extremely excited to be working alongside the brand,” said Nick Bobir, Managing Director of The Chiefs. “Being one of the most iconic brands in the esports and gaming industry, HyperX not only supports our professional teams and content creators, but also shares our same level of passion for grassroots gaming, esports, and community activations. We’re looking forward to working together through 2020 and beyond.”

As the partnership with The Chiefs formed, HyperX also signed Mitch Robinson, an AFL player for the Brisbane Lions and enthusiastic Fortnite streamer, as a HyperX brand ambassador. No stranger to elite performance and competition, Mitch is a competitive and ambitious player on the football field, but also mirrors those qualities while playing Fortnite. In 2020, Mitch hosted a 24-hour charity stream on Twitch for the NSW Rural Fire Services and successfully raised over $12,000 to donate to the organisation. Moving forward, whether he is working out for the footy or having fun with the squad in Fortnite, Mitch will be sure to rock with HyperX peripherals and win games in style.

“The partnership with The Chiefs is once again showing HyperX’s continuous supports toward the gaming community in Oceania.” said Susan Yang, Marketing Director, APAC Region, HyperX. “The Chiefs and Mitch Robinson perfectly illustrate the concept of We’re All Gamers – Whether you’re pro esports players or athlete, we’re all gamers as long as we share the same passion toward gaming.”

In celebration of the partnership with The Chiefs, HyperX also has a special promotion for fans from March 7th to 22nd. Customers can enjoy discounts of up to 30% with the purchase of selected HyperX gaming headsets. Don’t miss out on the opportunity to get premium equipment for a friendly price! For more information, please follow HyperX ANZ on Facebook and Twitter.