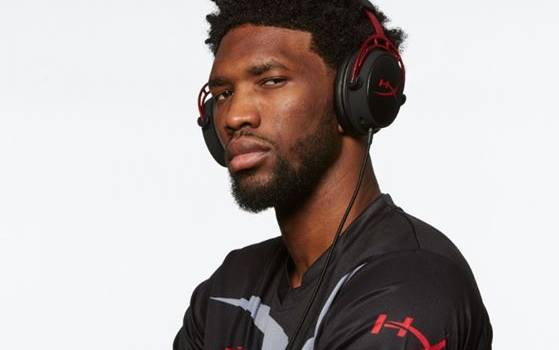 Taipei, Taiwan – February 13, 2018 – HyperX, the gaming division of Kingston Technology, today announced Philadelphia 76ers center and avid gamer Joel Embiid as brand ambassador for the gaming industry’s most popular headset brand. Recently named an Eastern Conference starter for the 2018 All-Star Game in Los Angeles, Embiid is a transformational player for one of the NBA’s most iconic franchises and is known for his larger than life personality. With the signing of Embiid to the HyperX family, HyperX becomes the first brand connected to Team Dignitas, the Philadelphia 76ers, and a player from that team.

“When I’m not playing basketball, I’m gaming,” said Joel Embiid. “HyperX headsets are extremely comfortable and the audio quality is amazing. They help me do what I love to do, win.”

Also known as The Process, on the court Joel is known for his aggressive style, mixing a deft shooting touch with the strength of a true center. Off the court, you can find Embiid playing NBA2K18 or commenting on sports and esports to his more than one million fans on Twitter, 1.8 million on Instagram and other social channels. “Skilled as a pro basketball player and recognised as an esports social media star, HyperX welcomes Joel to the HyperX family as a brand ambassador for gaming,” said HyperX. “We’re looking forward to including Joel in our activities in 2018.”
Joel Embiid’s social media: Twitter: @JoelEmbiid, Instagram: joelembiid