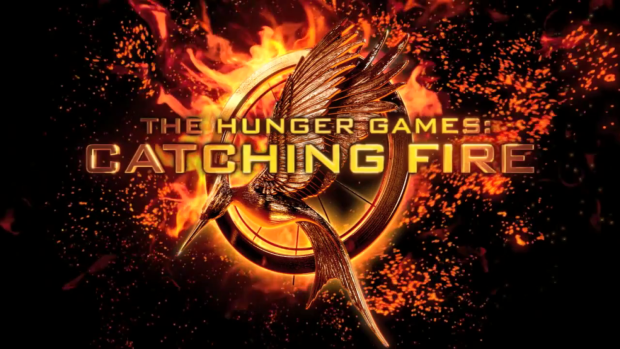 Summary: The Hunger Games: Catching Fire far surpasses the first film and stands as one of the better literary adaptations I’ve seen, easily matching the source material for quality.

I’ll be honest: Coming in I didn’t expect to like Catching Fire all that much at all. Despite being considered kind of a transitional film in regards to building the story towards the final conflict of the third Hunger Games novel, Mockingjay (Which will be split into two films as is de rigueur at the moment), the truth is that I was just never that big a fan of the series overall, viewing it as a lacklustre derivative of superior fare like Battle Royale, The Long Walk and even The Running Man. 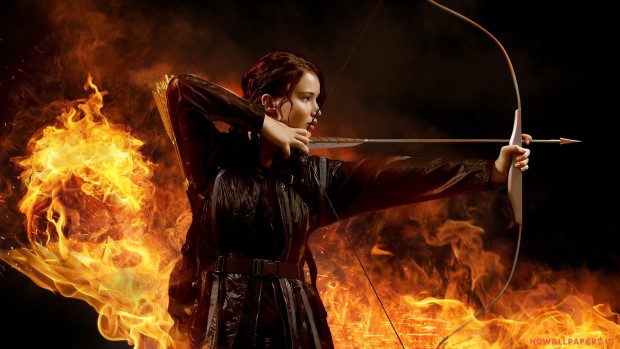 However, I went into Catching Fire with an open mind and found myself surprised by how quickly the story caught my attention and held me enraptured until the very last scene; superior to its predecessor in almost every way, despite its rather extensive running time there is nary a dull moment in this welcome return to the titular gladiatorial contest.

Picking up after the unprecedented climax of the 74th Hunger Games, where for the first time there were two victors due to the quick thinking of Katniss Everdeen (The mercurial Jennifer Lawrence), Catching Fire finds Katniss revered by the public for her act of defiance against The Citadel but privately contending with post traumatic stress regarding her actions during the games. 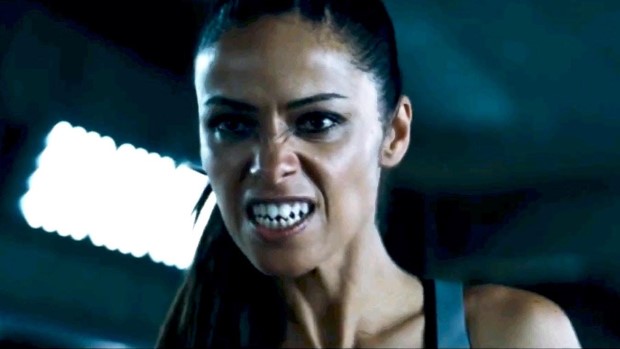 In order to quell any uprising inspired by Katniss and Peeta’s (Josh Hutcherson) victory, President Snow (Donal Sutherland) aims to portray their subterfuge as being motivated by love rather than any inherent opposition to The Citadel, hoping to distract the public from his nefarious machinations whilst also tearing down the “Rebel” image that has been built up around Katniss by portraying her as just another vapid celebrity far removed from the common man.

Forced to participate in a sponsored tour of the districts lest she lose her real love Gale (Liam Hemsworth), Katniss struggles to maintain the facade imposed upon her by Snow, reading prepared scripts and acting ambivalent to the plight of the residents of the poorer districts. Yet, despite Snow’s efforts, Katniss is still viewed as a rallying figure and Snow resorts to playing his trump card- Ostensibly honouring the 75th anniversary of the games, Snow decrees that the pool of contestants will be composed of previous victors, with his main goal being to eradicate Katniss and the threat her image now poses. 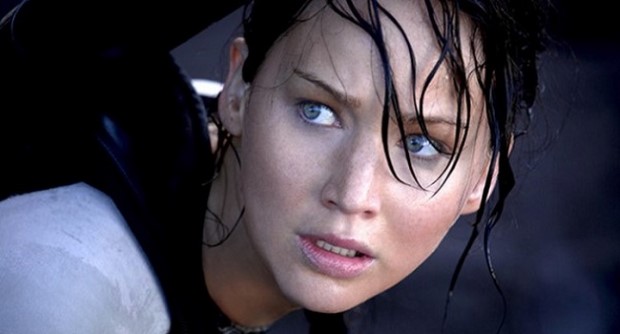 It takes just over a third of the film to build up to the actual games themselves but once the action begins it quickly elevates the film above its predecessor in both style and sheer exhilaration; one of the major differences this time around is that each and every contestant has experienced the games and suffer none of the initial trepidation experienced by the regular participants.

Another major change is the design of the arena itself, which poses a myriad of environmental elements for the contestants to combat against as well as each other. Katniss and Peeta find themselves begrudgingly pushed back into competition against several other unwilling participants and must form hasty alliances in order to survive the treacherous nature of the games… And there’s something else brewing as well, something that will touch the lives of everyone. 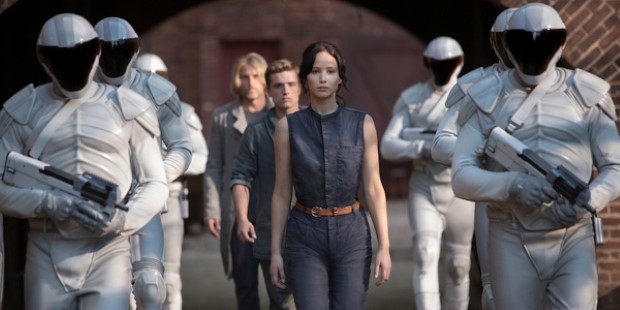 Katniss Everdeen’s  developmental trajectory as a character is easily clearly evident throughout Catching Fire, a testament to the acting skills of the always brilliant Jennifer Lawrence; this instalment sees Katniss begin her transformation into becoming the voice of an uprising, taking stock of what it really takes to survive and questioning whether or not she truly deserves to be paraded around as a champion when one considers the atrocities that she’s had to commit.

Lawrence’s performance is bolstered by a strong supporting cast, featuring stellar work from the likes of Woody Harrelson, Phillip Seymour Hoffman and Elizabeth Banks that begin to put meat on the bones of what could easily be considered cardboard cut-out characters. 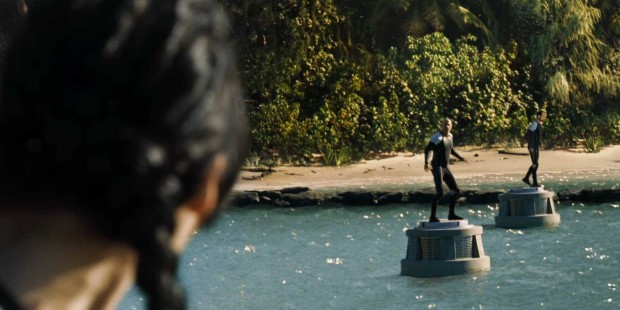 Despite the lengthy running time and convoluted plot, Catching Fire seems more competently paced than the first Hunger Games and both the action and more intimate scenes carry much more weight this time around.

The film ends on a cliffhanger, as to be expected, but when viewed as a singular experience Catching Fire is leaps and bounds ahead of not only the first instalment in the film series but also many of the film’s Young Adult fiction contemporaries. 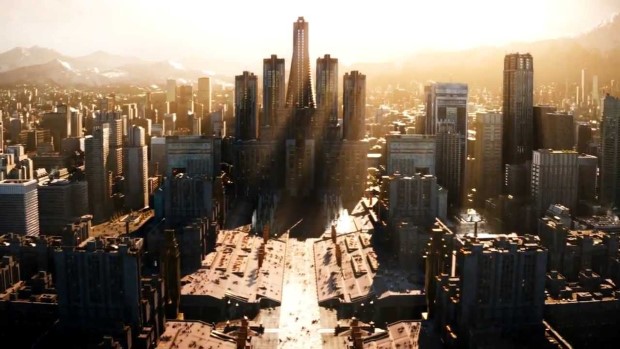 Visually Catching Fire is a much more polished and accomplished production when compared to the purposefully shaky camerawork and washed out cinematography of The Hunger Games; colours are vibrant and fine detail is clearly evident in the picture and the image quality overall is superbly crisp, with a fine grain throughout. Skin tones look natural and blacks are suitably inky, with no sign of crushing or banding present through the film’s running time, a triumph when one considers how much of the film takes place at night. One area that merits particular attention is the superb aspect ratio shift that occurs once Katniss enters the arena for the games, the picture filling out the previously letterboxed image and showcasing everything in its full screen, IMAX footage glory.

The audio track comes in an immersive lossless DTS-HD Master Audio 7.1 mix that effectively takes advantage of all eight channels, with clear delineation and no evidence of audible bleed through. Dialogue can be a little on the thin side at times but overall this is a bombastic feat of audio mastering the matches the superb quality of the picture, making this one of the pinnacle transfers released by Roadshow this year. 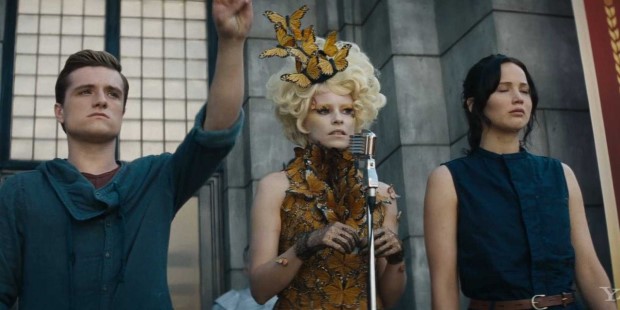 Catching Fire comes with a decent collection of extras, including behind the scenes featurettes and an insightful commentary that offers insight on excised scenes, the difficulty of remaining faithful to the source material whilst also tailoring the film to best take advantage of a visual medium and more, although there are a few minor spoilers dropped for the Mockingjay films if you’ve not boned up on the novels.

The featurettes cover the new additions to the cast, aspects of production design, the returning cast members and the production process itself; most are entertaining and generally informative, filled with a raft of interviews with the cast and crew. There’s also a selection of deleted scenes that, aside from a brief scene revealing the origin of the Jabberjay, really don’t add anything extra to the proceedings.

I must admit to lamenting the lack of the feature length documentary available on international and special editions, but beggars can’t be choosers. 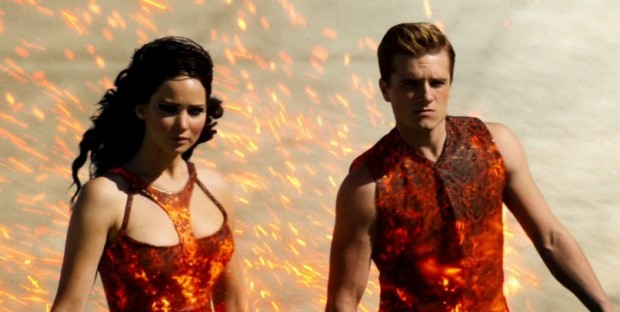 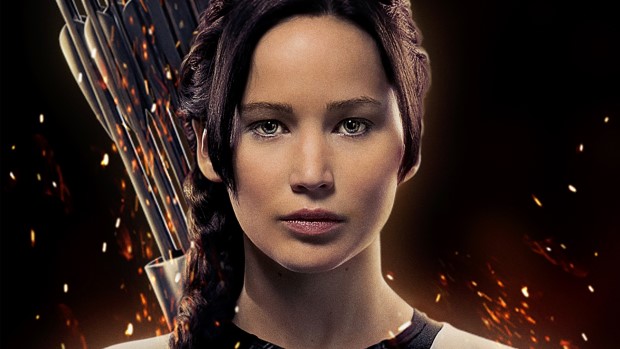 Despite my misgivings, The Hunger Games: Catching Fire far surpasses the first film and stands as one of the better literary adaptations I’ve seen, easily matching the source material for quality.

Director Francis Lawrence (Water for Elephants) steps up to the plate admirably and delivers an exhilarating and highly accomplished experience that also manages to raise some interesting themes regarding the exploitative nature of the media and how it can be utilised by an oppressive force, in this case the government of a dystopian future. 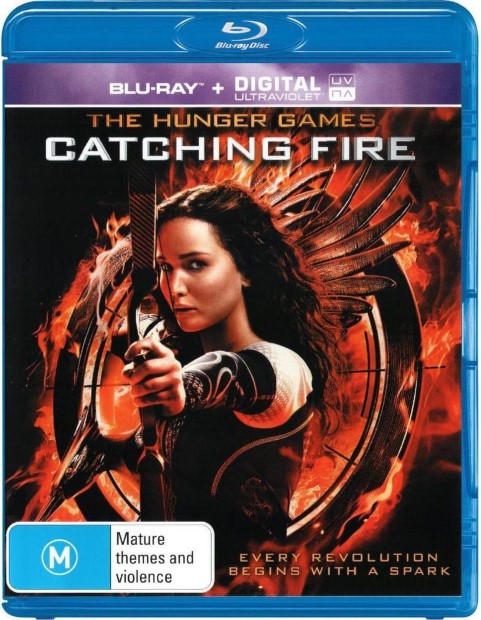