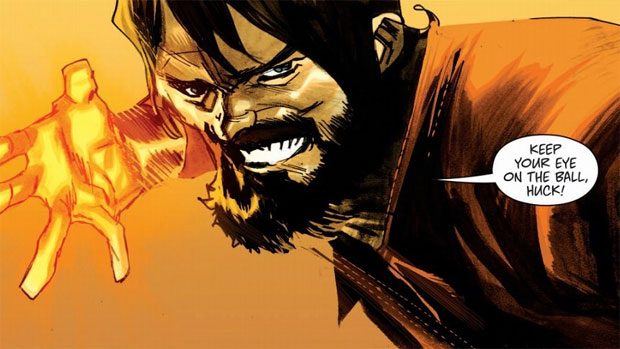 Well here we are sadly at the end of Huck. Going into #6 I had really high expectations that I was going to be seeing some sort of hectic finale and experience an ending that would leave me wanting more. You know…something to keep us thinking about the characters and the story long after we have finished reading. C’mon Millar you have to give us something juicy, you always do!

Well I have to say that he certainly did surprise me but for different reasons. I found that after finishing Huck I was left feeling a little puzzled over the heart-warming ending and the overall feel-good vibe. This isn’t what I expected from Mark Millar, the man who almost always throws a dark and disturbing twist that unnerves and leaves you feeling somewhat unsettled. It all felt like it was a very tidy ending…perhaps a little too tidy. But let’s not allow my reservations over the ending confuse you. This is still a good comic and for many it will provide the satisfying conclusion to what has been an engaging read. 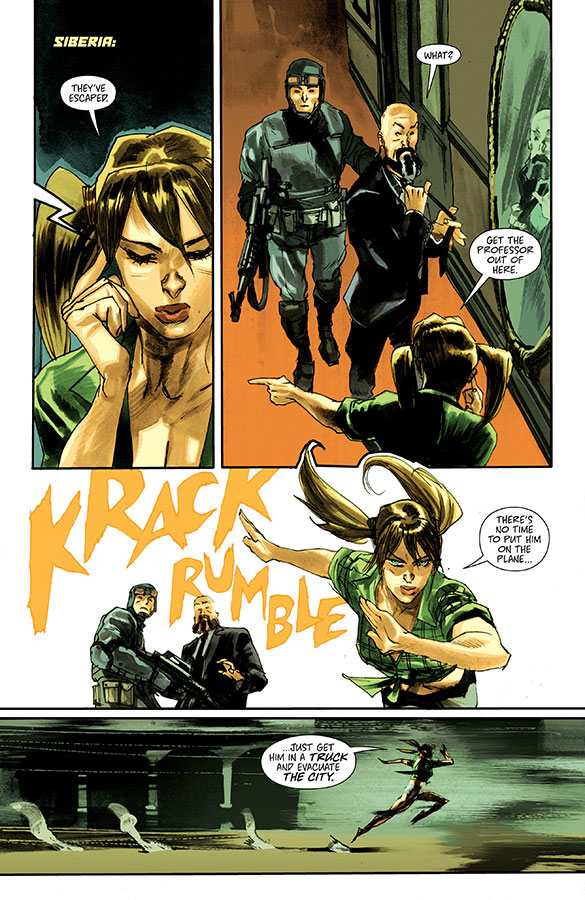 So lets start from the beginning of this issue. We begin where issue 5 finished, thrown straight back into the fast-paced action where Huck and his mother are in the midst of fighting what appears to be a losing battle for their freedom. Their imprisonment by the Professor didn’t last long and they are up against some tough competition in the form of Orlov’s formidable androids and armed soldiers. The androids prove to be worthy adversaries for Huck and his mother, Anna, as they were specifically designed to fight against them. Every blow seems to get them nowhere and you start to wonder how will they get out of this mess.

Of course in the end they do and rather abruptly I must say. And the soldiers…well, what soldiers? I felt like I was cheated out of what could have been an epic fight for their freedom, as it all felt a little too easy and a little too rushed. In saying that, Rafael Alburquerque did a wonderful job of portraying the action scenes and fighting sequences. There is a real sense of movement during these scenes and he did bring it all to life beautifully. I’ll definitely be keeping an eye out for Alburquerque, as I really did enjoy his art and I would love to see more of his work. Something must also be said about the superb colouring by Dave McCaig. He really did set the emotional tone for the comic in a subtle, yet effective way. 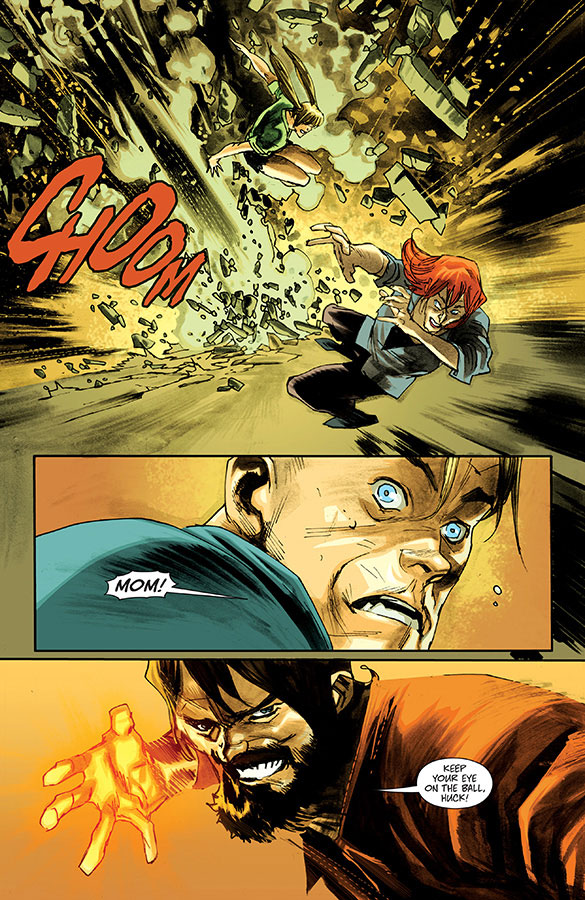 It’s hard for me to talk about the end of this series, without giving too much away but what I will say is that I was very satisfied with what happens to Professor Orlov. I thought that the smart little twist that Millar added to Orlov’s downfall was great. There is one panel that perfectly captures the devastating effect that this has on the character. So in the end, Huck is the victor and he and his mother go back home to start a new life together. Huck can continue on with his daily good deeds and the slow-paced, simple life that he previously enjoyed. It’s a very feel-good ending to what is essentially a feel-good comic.

Whilst reading this series I really cared for Huck. He’s a nice guy and he has a real sweet innocence about him. You kind of feel a little protective over characters like this, so when you see them down in the dumps you want them to succeed and come out on top. I was just surprised that it all worked out so perfectly for him. This isn’t necessarily a bad thing but I guess I’m just used to really gritty story arcs from Millar that leave me shocked and craving more. With this ending I felt…satisfied, nothing more, nothing less. It was a heart-warming way to finish the series and, for most people, that’s not such a bad thing. 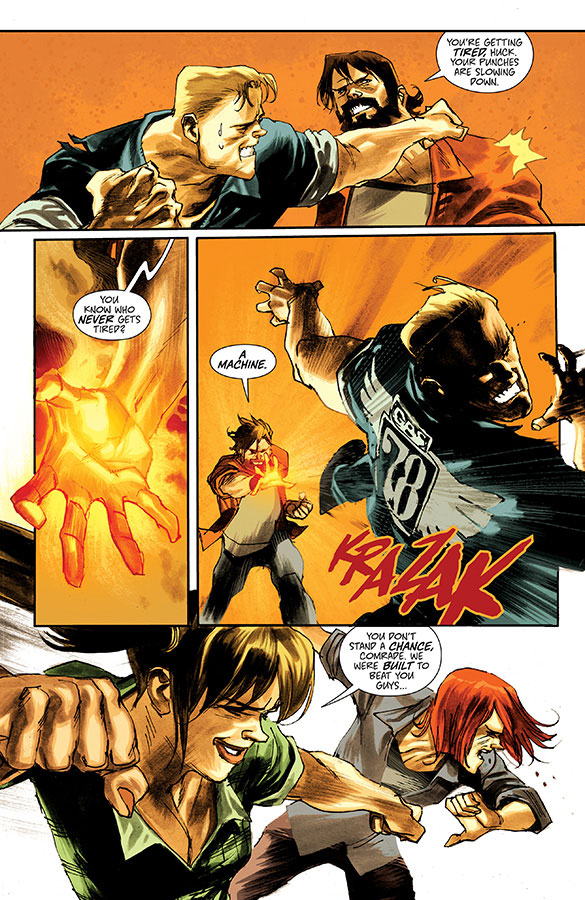 After finishing Huck I soon found out that the series is going to be adapted into a film in the future, like many of Millar’s comics. Of course the happy, sweet and super tidy ending now makes perfect sense. The hero wins. And all that he cares for is safe, protected and happy. Everything has gone back to the way it was, with some small changes and additions to Huck’s life. Huck and his mother lived happily ever after. The end. 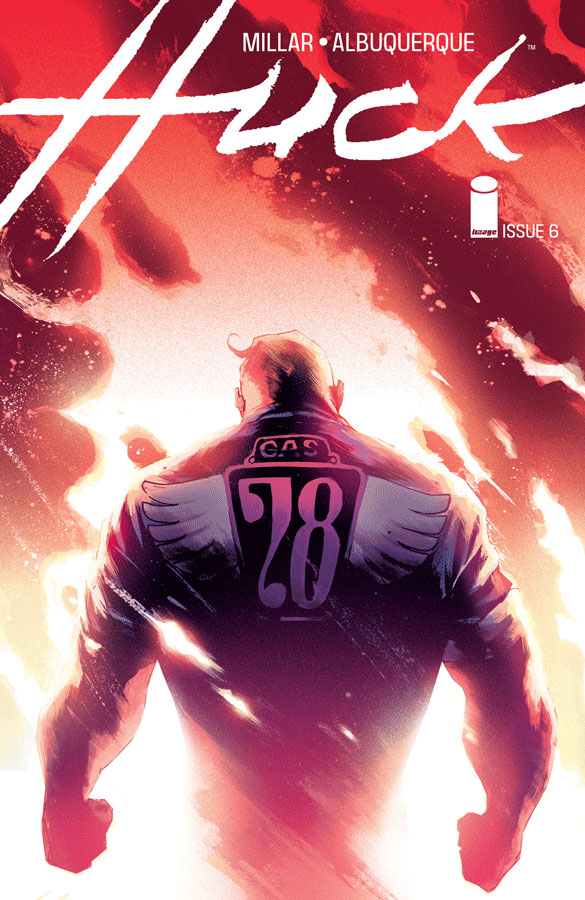