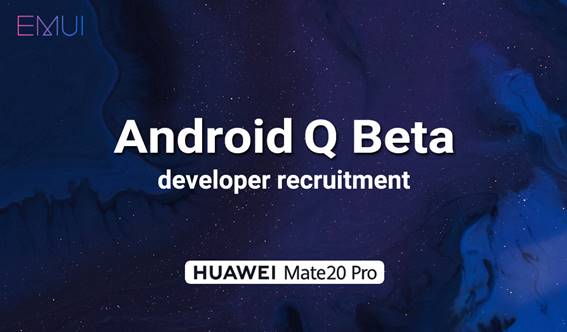 During Google I/O 2019, Huawei Consumer Business Group (BG) announced a global Android Q Developer Recruitment drive for beta testers, running from now (May 2019) through to 30 June 2019. Developers are invited to try out the latest Android test build on HUAWEI Mate20 Pro and contribute to optimising and improving device compatibility of Android Q.

Interested developers may submit their applications on Huawei’s Friendly User Test (FUT) app[1] with a HUAWEI Mate20 Pro device. Once registered[2], developers may download the beta software via Huawei OTA, and are encouraged to submit feedback to Huawei throughout the test period.[3]

Announced on 7 May at Google I/O 2019, Android Q is the tenth major version of the popular smartphone platform. Designed with enhanced protection for user privacy, the latest Android version introduces new security mechanisms and offers more granular controls over how data is shared between the operating system and apps.

The update adds features that accommodate user demands for new entertainment experiences and novel use cases enabled by new device form factors such as foldables. It also natively supports a 5G framework in anticipation of the upcoming 5G-enabled smart devices expected to arrive later this year.

During the presentation, the HUAWEI Mate20 Pro was listed as one of the initial devices to support the Android Q beta. Following the beta testing period, the full HUAWEI Mate20 Series will also be among the first to receive the new Android version once it is released.

In recent years, Huawei has been working closely with Google to improve the Android platform, sharing its experience in security and performance optimisation from developing EMUI with Google for the benefit of all players in the industry. The feedback Huawei receives from developers participating in the Android Q beta test will also be relayed to Google to accelerate the development of the software.

[2] For inquiries regarding the recruitment program or the test build, please contact Huawei via email (hwthirdparty@huawei.com) or visit https://www.google.com/android/beta to learn more.

[3] Huawei reserves the right to make final decision on all matters in relation to its beta test program.