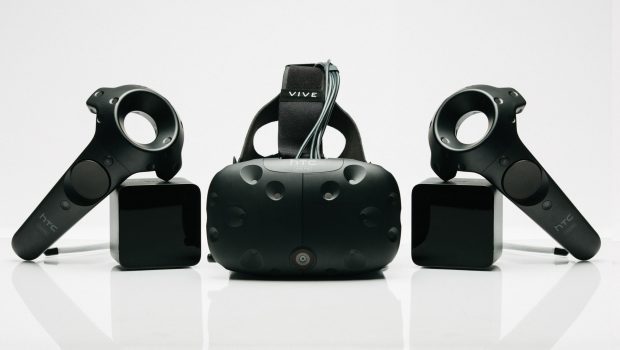 VR and I have a long history. I believe in a previous article I wrote that I think my first memory of VR was the old Dactyl Nightmare (I think that’s what it was called) arcade VR experience that was set up at Doncaster Shopping Town. In the more recent VR iterations I went from the classic VR Rollercoaster demo on a Oculus DK1 at Comic Con some years ago, from that I got my own Google Cardboard, then I purchased a second hand Oculus DK2. Finances meant I had to sell the DK2 but then I got a Samsung Gear VR… and finally now I managed to purchase a second hand HTC Vive. So I’m back in VR well and truly and this is a brief overview of my time with the HTC Vive over the last couple of weeks.

Firstly I can say that the minimum specs that were stated for the Oculus Rift when it was first slated to come out are fine for the Vive… I actually built my current PC around those specs (because I had to keep it as cheap as possible… but I was determined to be using VR properly). I have not experienced any in game lagging or other issues… the only thing that can take a bit of time is the loading but that would likely be solved with an SSD (which I have but only for my operating system… but man is it nice to only take a few seconds to boot). Secondly if you are considering getting a VR headset, you may want to check the port requirements of your chosen headset. The Vive is simple enough it plugs in via USB (3 is preferable though I believe it is supposed to work on USB2 as well) and via HDMI. The Oculus on the other hand I believe requires about 3 USB3 ports… many people get hubs to get around this, I have no personal experience with it (the DK2 had less cable needs) but just do a bit of checking to make sure you will be ready before you get going. 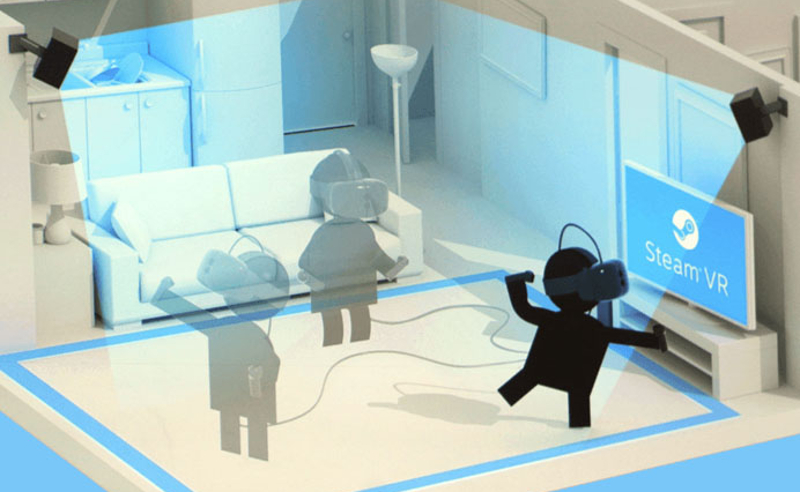 Set up was quite easy… the seller I bought my Vive from was selling it with a couple of poles to connect the lighthouse sensors to, it just means if I want to move them around I can simply move the poles and be up and running quickly, the other option is to screw the mounts into the wall and have them permanently in place. Steam guides you through the process and all things going well it should only take half and hour or so. A quick note on seated/standing/room scale. The main selling point of the Vive has been it’s ability to do room scale and indeed it can… when I was first reading about it however I didn’t really understand how that was arranged… I thought the lighthouse sensors would scan the room and figure it all out… how it actually works is you tell the setup you want to use room scale and it has you “trace” the edge of your playing area with one of the wands… this then becomes your VR playing space (which is represented in game by the holodeck style blue grid box). On that note… you can “cheat” the room scale, my room is more or less an L shape and from prior measurments I though it was fine… turned out the first time I did the tracing it came back as too small. I thought about this for a while and then decided to try “tracing” over the top of the toys/shelves etc in the room and sure enough I was allowed to use the space as a defined play area for room scale… the caveat to this as you may have already figured is that the blue grid box warning you you are leaving the play area isn’t going to come up when you hit some of the obstacles in your range… so clear a space if you can… be aware of the dangers if you can’t but want to “force” it anyway. 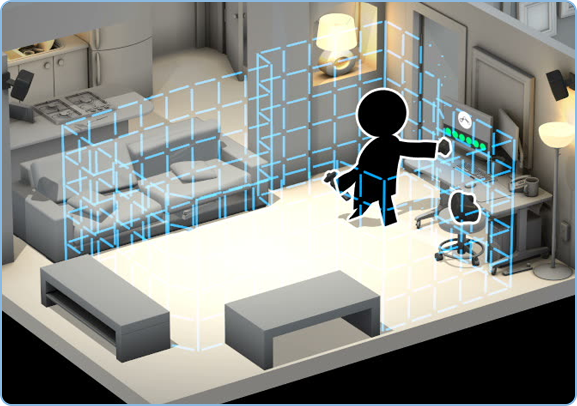 Both Oculus and Vive have their own “stores” (I use/d the Oculus one with the DK2 before I had to sell it and also have used it for the Gear VR). I’m not a huge fan of either… they have web based stores that are very similar to Google’s Playstore for Android breaking things down to categories etc… in theory this is fine but it kind of feels laborious to scroll through pages and there’s a chance you won’t find what you may want in the category you are searching through anyway. Fortunately you can just use Steam (some experiences are only available through the respective VR stores but the majority of things are on Steam). Within Steam you simply select VR as your browsing preference and you can scroll though all the games and experiences available (and read the reviews as you go.).

But enough about the set up… how does it play?

One of the first things I played was Valve’s own The Lab. Essentially an experience created to show the possibilities of VR and the controllers. The Lab contains different stations that you visit and each one gives you a chance to use the controllers in a novel way such as using a bow and arrow to stop invaders breaking down your forts door, slingshotting personality cores (imagine a mechanical sphere that contains the personality of the robots in Portal and you will know what this can be like… snappy comments included) and a handful of other experiences. It serves as both an excellent introduction to what VR can do… and a great pick up and play casual gaming experience.

I was lucky enough to get a copy of Gorn to review recently (review to come shortly) and it was the first time I played a game that required Room Scale. It is also the first game I’ve played that caused me to leave a mark on the wall… I hate to think of what a video of me playing Gorn would look like… but it’s a lot of fun, essentially a slash/beat ’em up in first person.

Elite Dangerous: Arena was quite stunning… though it was also the only experience I felt a little nauseous in… I think because of the complete 360 degree flight capability and the fact that you can watch your opponent as they fly over the top of you… that slightly off feeling actually reduced as I played more and the general consensus seems to be that much like you can get your sea legs if you’ve been sailing for a while… you can get your VR legs (or perhaps eyes?) after using VR for a while. The HUD in Elite Dangerous is quite stunning and the whole thing is very promising for some excellent dog fighting. 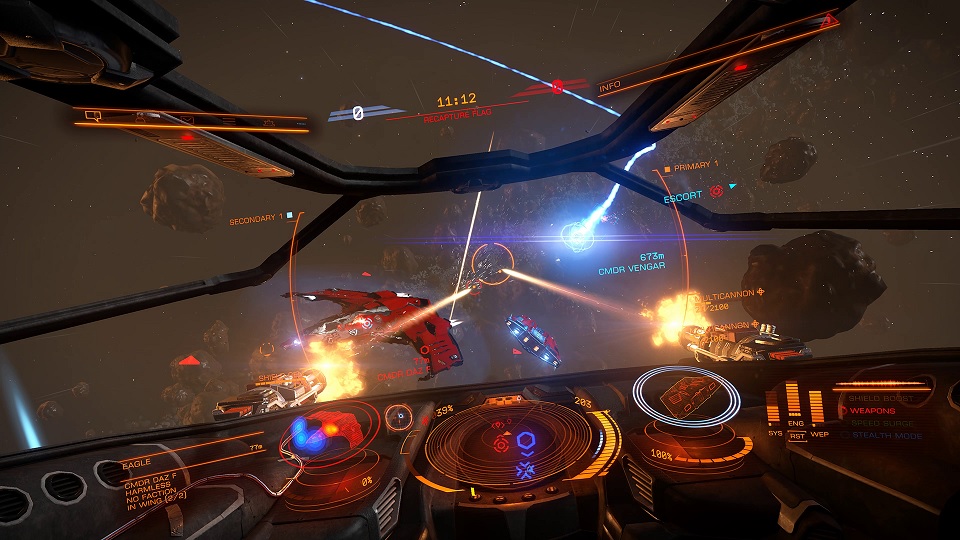 EuroTruck and American Truck Simulator are both playable but much like some other “not strictly VR” games that do require a little fiddling… predominantly requiring you go into their preference settings in Steam and either set them to Beta mode or for some games you may need to add a launch option (also be sure to turn off play in big screen from within Steam’s options). It’s a completely different experience to be sitting the cabin of your big rig and rather than moving the mouse to look around, you simply… look around. Due to it not having native support you can actually clip the bounds of your truck… but all that does is just make it look like you are a ghost moving through the frame.

Finally I want to mention Batman Arkham VR. The game got a bit of a mixed reaction… typically not through any fault of the game’s mechanics but simply that it wasn’t long enough (at $20 it’s not too bad, I picked it up recently when it was on special). The best way to think of it is if you’ve played any of the other more recent Batman games… it’s basically a much more personal version of that with a strong emphasis on the detective side of things rather than fighting. I could imagine this being expanded on for a more complete Batman game experience in the future because adding combat shouldn’t be too hard (perhaps in a manner similar to Gorn but with a little bit more room safety being considered ;) ) Personally as someone who loves the Bat… it’s a brilliant experience and when you first head into the batcave you do get a sense of wonder… there’s quite a lot to play with and it looks stunning. 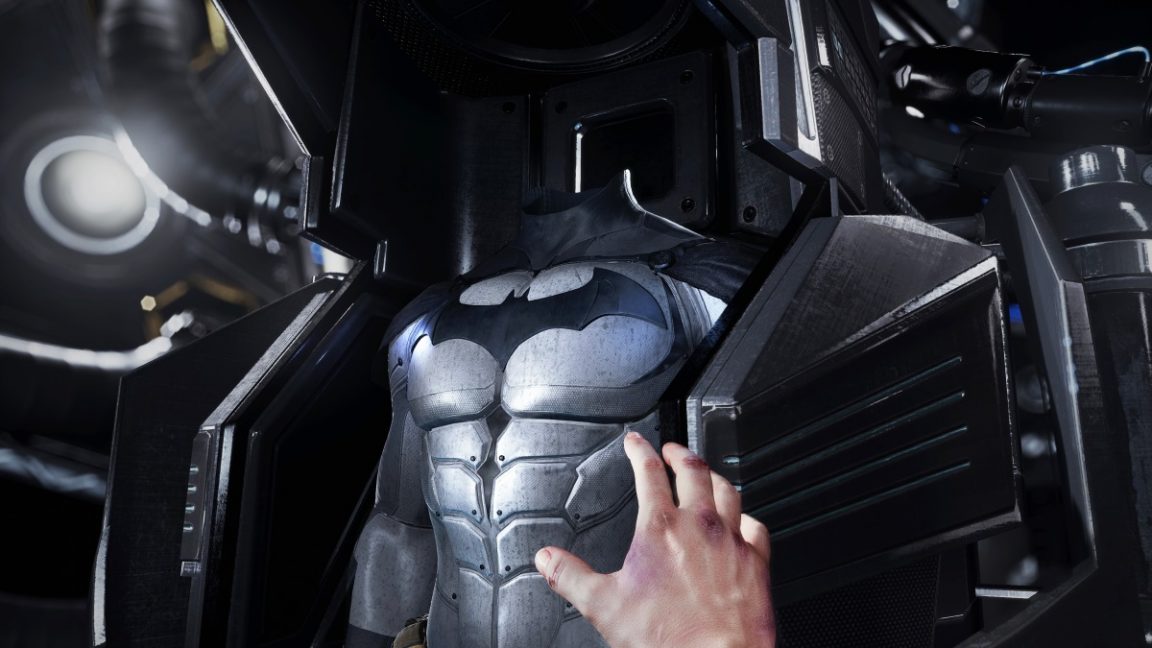 There’s so much more I can say about VR but it really is one of those things (as they said in The Matrix… which really is screaming out to have a VR game made of it) you have to experience for yourself to really appreciate. The difference between the prior seated only experience with mouse and keyboard I had with the DK2 and the standing/room scale with fully tracked Vive wands now is immense… it really is a big difference to be able to see your hands (or wands) in the game and watch as they move 1:1 with your own movement. A lot is mentioned of the resolution and screen door as well… perhaps I’m just more forgiving but I didn’t find it to be an issue at all. Higher quality games, The Lab, Batman etc look stunning (to the point of being able to see the strands of fur on a coat) and the screen door is more or less a non issue if the game is good enough to draw you in… your eyes just focus on the action and wonder around you and the screen door effectively fades away.

If you can afford it I would certainly recommend jumping into VR… by all means start with Google Cardboard or Gear VR if you haven’t had any experience… but if you’re familiar and have the resources then there’s a lot of new worlds out there waiting to be explored!