How to Talk to Girls at Parties Comic Review

Summary: The mundane and ordinary is turned into something surprising and fantastical.

This version of Neil Gaiman’s short story, How to Talk to Girls at Parties, is a graphic novel adaptation from Dark Horse Comics. In this edition we get to see the wonderful and refreshing art by the brother duo, Fábio Moon and Gabriel Bá, best known for their work on The Umbrella Academy, Daytripper and Casanova. For those familiar with Gaiman’s writing, you’ll be no stranger to his whimsical way of storytelling and his ability to turn the mundane and ordinary into something surprising and fantastical. So prepare yourself for a similar experience!

The story is retrospectively narrated by Enn, one of two young boys who are on their way to a friend’s party in 1970’s London. The boys, Enn and Vic, are both best friends who are complete opposites of one another. Vic is your archetypal handsome Casanova, who is confident and girl obsessed, whilst Enn is shy, timid and insecure about himself, especially when surrounded by girls. We follow the boys as they accidentally stumble upon the wrong party, thinking that it is the house of their friends. Enn is reluctant to go inside, whilst Vic is all keen and filled with gusto at the prospect of meeting new girls. The dialogue is innocent and funny and reflective of that typical teenage dilemma of having an interest in the opposite sex but not knowing how to interact, communicate or behave around them. Remember those years? 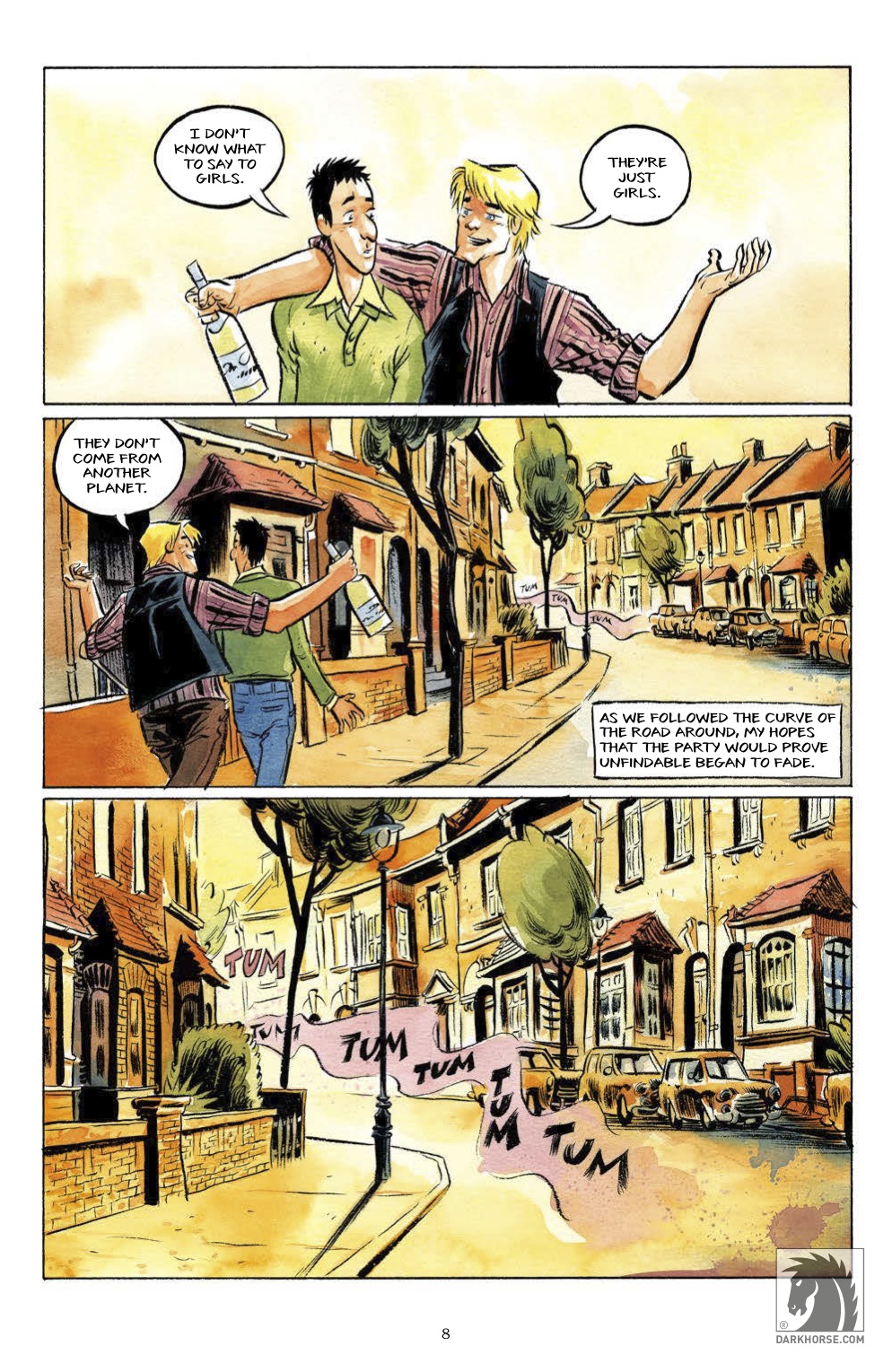 The story is really all about Enn and the strange interactions that he has with three girls at the party. He begins to make observations that there is something a little strange and different about them all. There clearly is more to these girls than meets the eye, as they start to talk about abstract concepts about life and the cosmos. You as the reader quickly pick up on things that Enn clearly misses out on. His nerves make him oblivious to what is actually happening around him. I particularly like the moment when one of the girls complains about being a decaying lump of meat hanging on a calcium frame. Once again Enn shrugs it off as he continually struggles with his awkwardness and nerves. Enn always seems to put down their strange ramblings about complex ideas to the fact that they must be foreign exchange students and that they do things differently from where they come from.

The story culminates in a mad dash from the party after Vic upsets Stella, who appears to be the host of the strange party. Her rage is clearly evident as she unleashes her mighty wrath upon the boys in an otherworldly kind of way. The boys leave the party just as confused about girls as they were when they arrived. Vic seems to know something that Enn doesn’t but once again, Enn puts that down to Vic having more experience with girls and being reluctant to talk about what really went on and what he really got up to. Girls are still a mystery to Enn and he accepts that he’ll never know or understand why. The narration of the much older Enn still seems troubled, and confused, as he can’t fully recount what happened that day, thirty years ago. It’ll always remain a mystery to him. 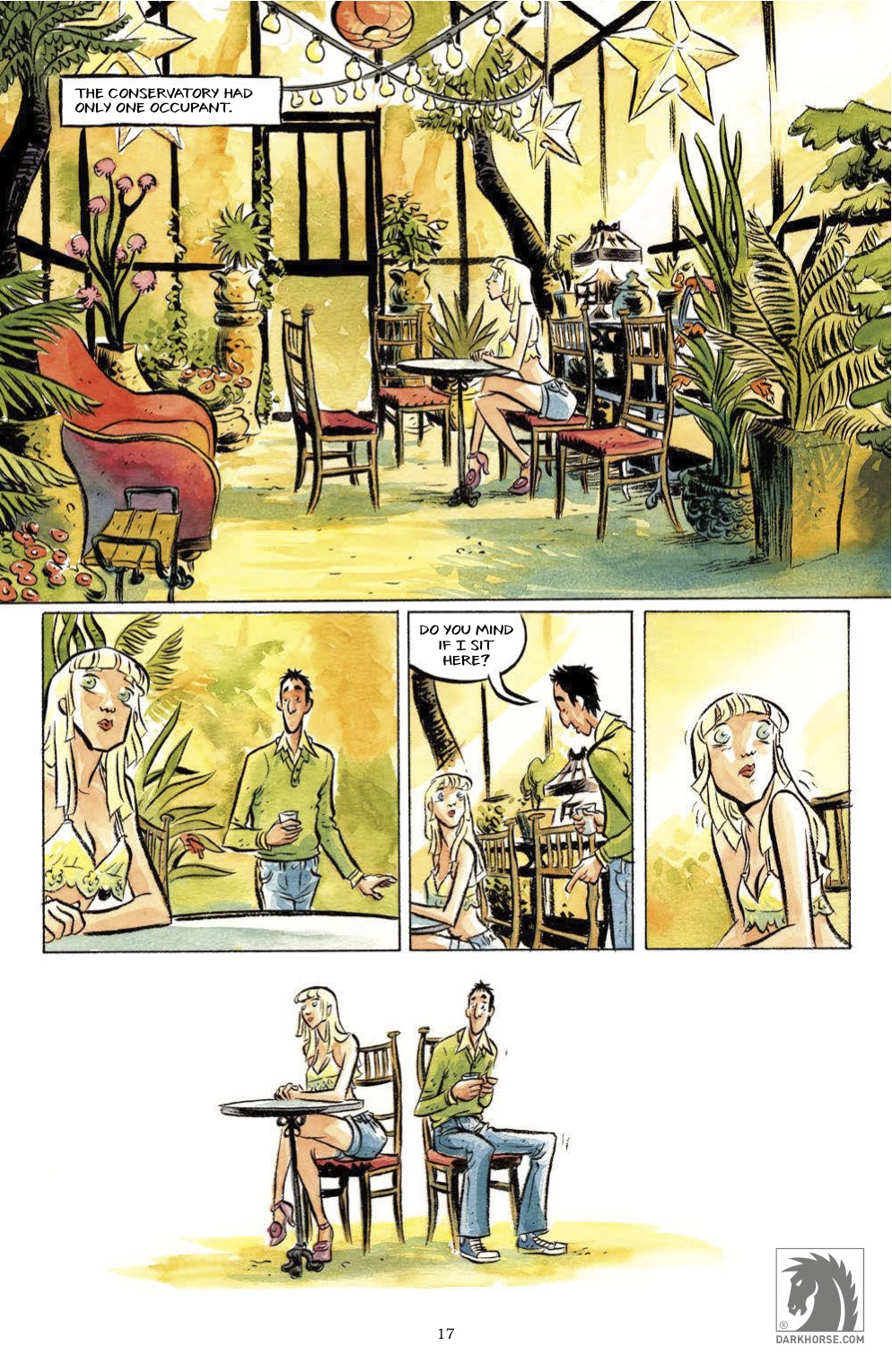 How to Talk to Girls at Parties was originally just a short story but this new addition comes with the lovely illustrations by Fábio Moon and Gabriel Bá. I really enjoyed having their stylistic and emotive art there to accompany the story. It makes it all a much more immersive experience, as visually seeing facial expressions really adds to some of those more subtle moments of awkwardness and teenage and insecurity. I find that their art style is interesting, emotive and very distinctive. There is a combination of ink and watercolours and this really brings a heightened vibrancy to each page. Their line work is minimal, hard and angular which results in almost abstract features on the faces of some of the characters. This coupled with the soft colours really works well, as it offers a lovely balance between the two. Their inking really adds to the overall tone of the story and it sets up the strange atmospheric and eerie quality to the party and the interior of the house. Generally I find their art to be very distinctive and deserving of its reputation. 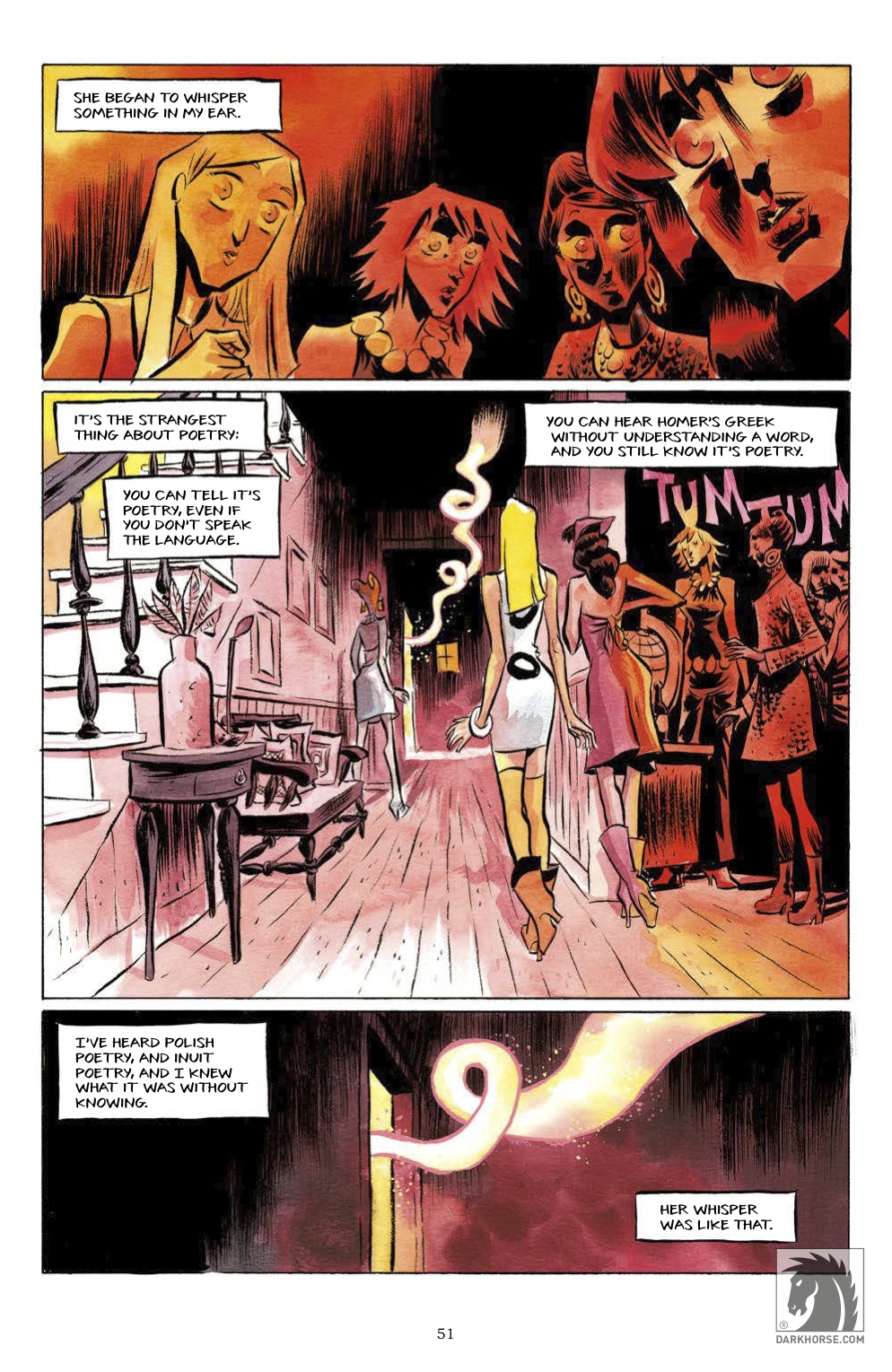 Overall I found this to be a pleasant and whimsical read. Even though it’s a simple story with minimal progression with its story arc, it is still fun and quite relatable. We can all connect with once being young and nervous around the opposite sex and feeling almost overwhelmed at being thrust into daunting situations. I also feel like this edition of How to Talk to Girls at Parties is much more engaging with the addition of the art from Moon and Bá. Their art really does add to the whole experience and it works lovely with Gaiman’s story.

I giving this graphic novel 4 out of 5 stars!