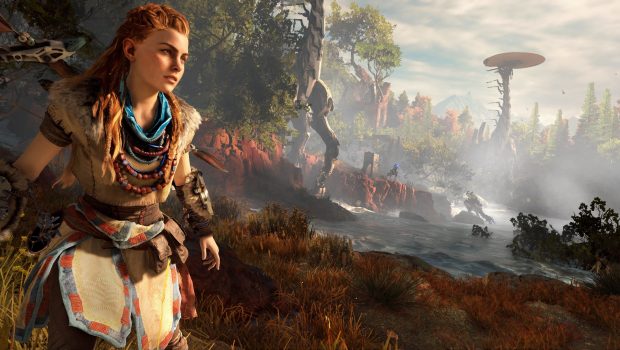 Horizon Zero Dawn was the centrepiece game at the PlayStation press event. We were taken through a short, live demonstration which was intended—and successfully managed—to whet our appetite. Part way through, the game bugged out and a character fell through the world; this prompted a quick restart and then play proceeded as planned.

This glitch illustrated something to me: live demonstrations are incredibly, incredibly structured. Even after a restart, our demo leader followed the same pathways and performed the same actions. Recognising the PR magic that informs these sorts of things, realising that this same task is practiced and practiced over again until it can be performed with minimal chance for error—these things should tarnish the shine a little. But watching Aloy, the player character, run and slide and shoot her way through a beautifully lush world was anything but tarnished.

There’s a section where Aloy pops out into a clearing and there are giraffe-like dinorobots grazing in the middle distance. It’s one of those shots that is meant to inspire awe; it draws heavily from the brachiosaurus scene from Jurassic Park in a blatant attempt to capture the imagination. And it does. As obvious as it is, it still works. It worked for me with the giraffes in The Last of Us, it worked for me with the Adamantoise enemies on Gran Pulse in Final Fantasy XIII. Seeing majestic creatures tower over you is awe-inspiring.

But, primarily, the demo indicated that Horizon Zero Dawn would be fun. And when we sat down—and Michael, the demo player, was gracious enough to get me a seat for my bad back, which was definitely appreciated—for some play time, fun it most certainly was. I’ve spent a lot of time mastering PC controls and so my use of a controller is a bit rusty, which made it awkward to get the hang of at first. And, of course, playing with an inverted camera meant that my entire EB Expo weekend was spent quickly changing the control scheme (sorry to the poor schmucks who got to my machines after me). But once I was moving, things got more interesting. 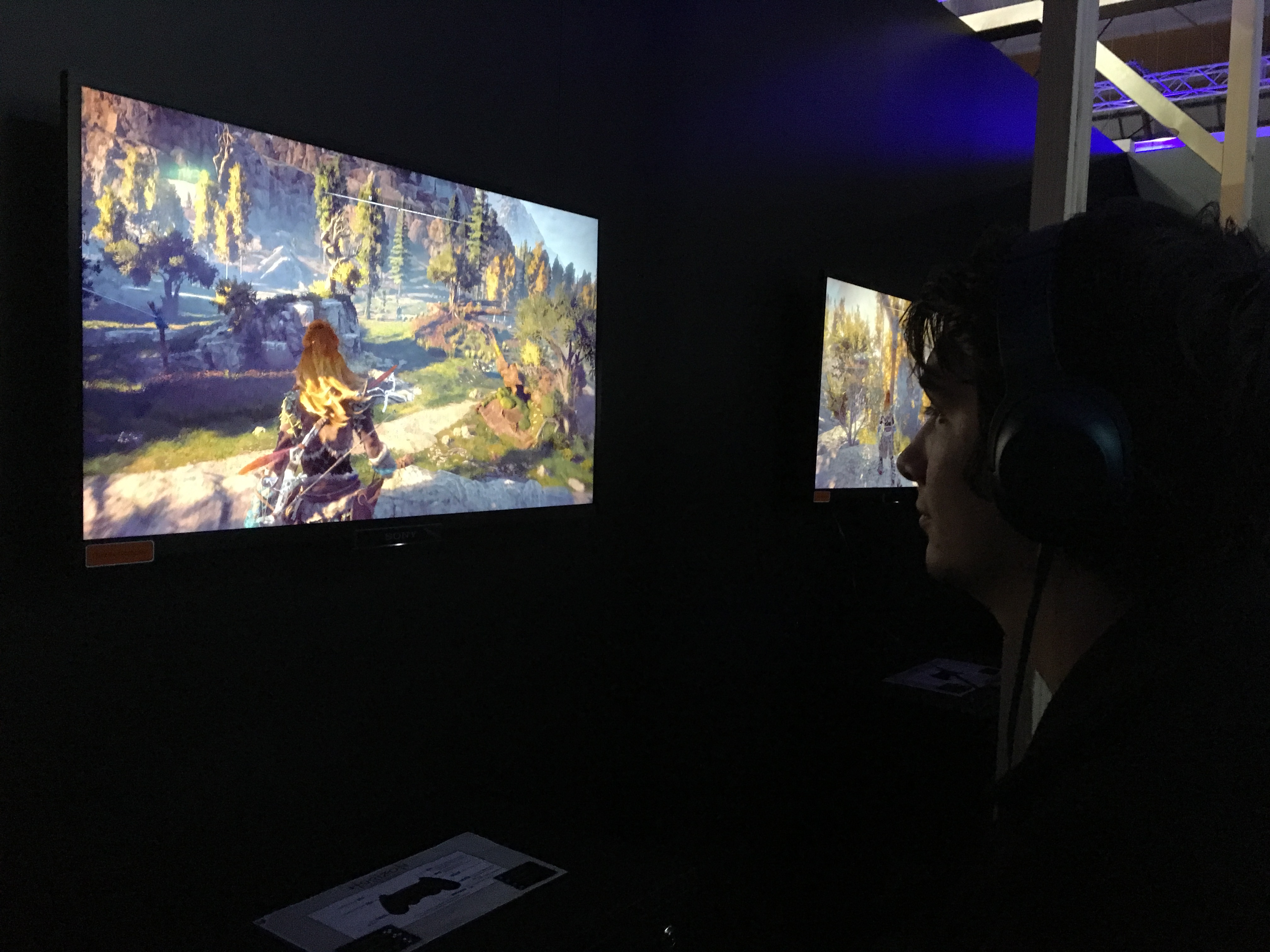 The demo was styled as a series of challenges to demonstrate a few of the ways Aloy can interact with a few of the early creatures. There were stealth attacks, capturing and taming, and shooting at weak points. What strikes me about Horizon Zero Dawn (and, indeed, a few of the other games on show at EB Expo, like Dishonoured 2) was that the player is given a large arsenal of weapons and strategies, and all of them feel both viable and necessary.

Horizon Zero Dawn’s premise is that the robots have taken Earth from humanity. We are no longer the dominant species and so have ‘regressed’ into a hunter-gatherer lifestyle. So fighting the robots isn’t as simple as running at them, firing like crazy; it’s stealthily moving through tall grass, it’s picking off stragglers, it’s scouting ahead and thinking on a plan. Once things kick off, it becomes about dodging, breaking line of sight, and turning the odds back to your favour rather than engaging in a scrappy brawl.

It seems more intelligent, more thoughtful a process. And that’s exciting: it looks like Horizon Zero Dawn will reward the player who has a good grasp of strategy rather than only rewarding players who have the best reflexes or offensive capabilities.

We didn’t see much outside of combat at this stage, but the demo real showcased a few narrative beats that drummed up some intrigue. The facial animations are impressive, even if they aren’t totally photorealistic. This seems like another trait shared by a few titles at this year’s EB Expo; Horizon Zero Dawn, like Final Fantasy XV, seems determined to create realistic depictions of conversations. Characters don’t awkwardly stand there and spontaneously emote, but move around as if they’re breathing people, not pre-programmed pixels.

Whether Horizon Zero Dawn will meet its potential or turn into another generic open-world game with slightly more interesting concept remains to be seen, but my hopes are high after what I’ve seen so far.