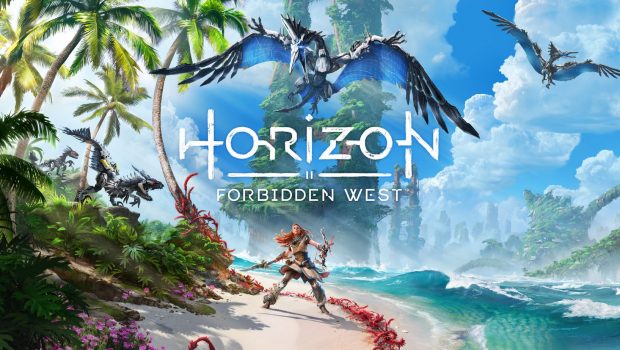 Summary: Horizon: Forbidden West is the first BIG next-gen title of 2022 that is also a true blockbuster in every sense of the word!

Horizon Forbidden West takes place after the extraordinary events of the previous game where our hero Aloy learned the truth about her past and the Zero Dawn project that was terraforming the Earth with its robot animals and dinosaurs to make it habitable for humans again. However with the destruction of the Zero Dawn project and its AI Gaia, Aloy is now on the hunt for a backup of Gaia in order to avert another disaster (or will it?) that takes her to a new part of planet. Additionally, developers Guerrilla Games successfully pay homage to Horizon: Zero Dawn, the first game as they expand the mythology of this universe, including Aloy in their latest epic next-gen blockbuster epic. 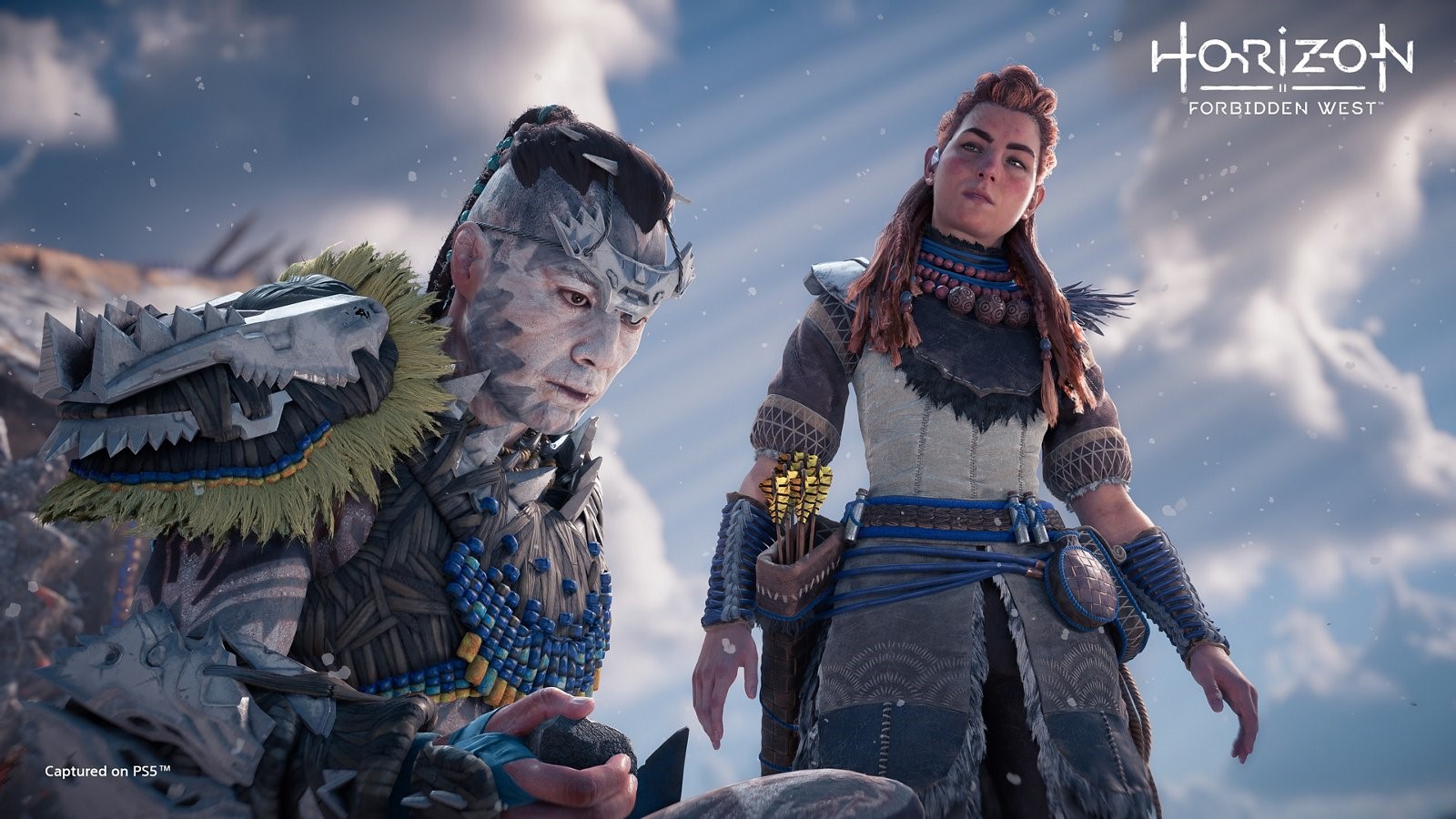 If you are new to the series, its creators give newcomers a great recap of the previous game that starts with a recurrent dream for our protagonist. Furthermore, the narrative at the start nicely explains the events of the first game, including a “light” tutorial of the gaming mechanics, including a handful of difficulty levels. Supporting the engaging story telling are the great in-game cinematics which help bring it all to life as we follow the Saviour of Meridian, including moments of betrayals and even romance! It’s a true PS5 blockbuster in every sense of the word!

Without spoiling this story and the excellent surprises along the way, the “red” blight continues to eat away at Mother Nature, leaving a devastating path of destruction and it’s up to Aloy and the player to stop this nefarious threat before it consumes everything, including going head to head with some villains as well. While the odds are against Aloy, she is also filled with self-doubt and questions her newfound “messiah” status with the tribe she now calls family, even though she still believes she is an outcast. Given that, the premise of ‘saviour’ or ‘hero’ not only sits uncomfortably with her but also weighs on her. As a result, it’s quite engaging to see Aloy grow as a person and fortunately she is not alone with NPC’s such as Varl in her quest as she begins her journey into the forbidden west. Monkey: Journey to the West? There are definitely some parallels! 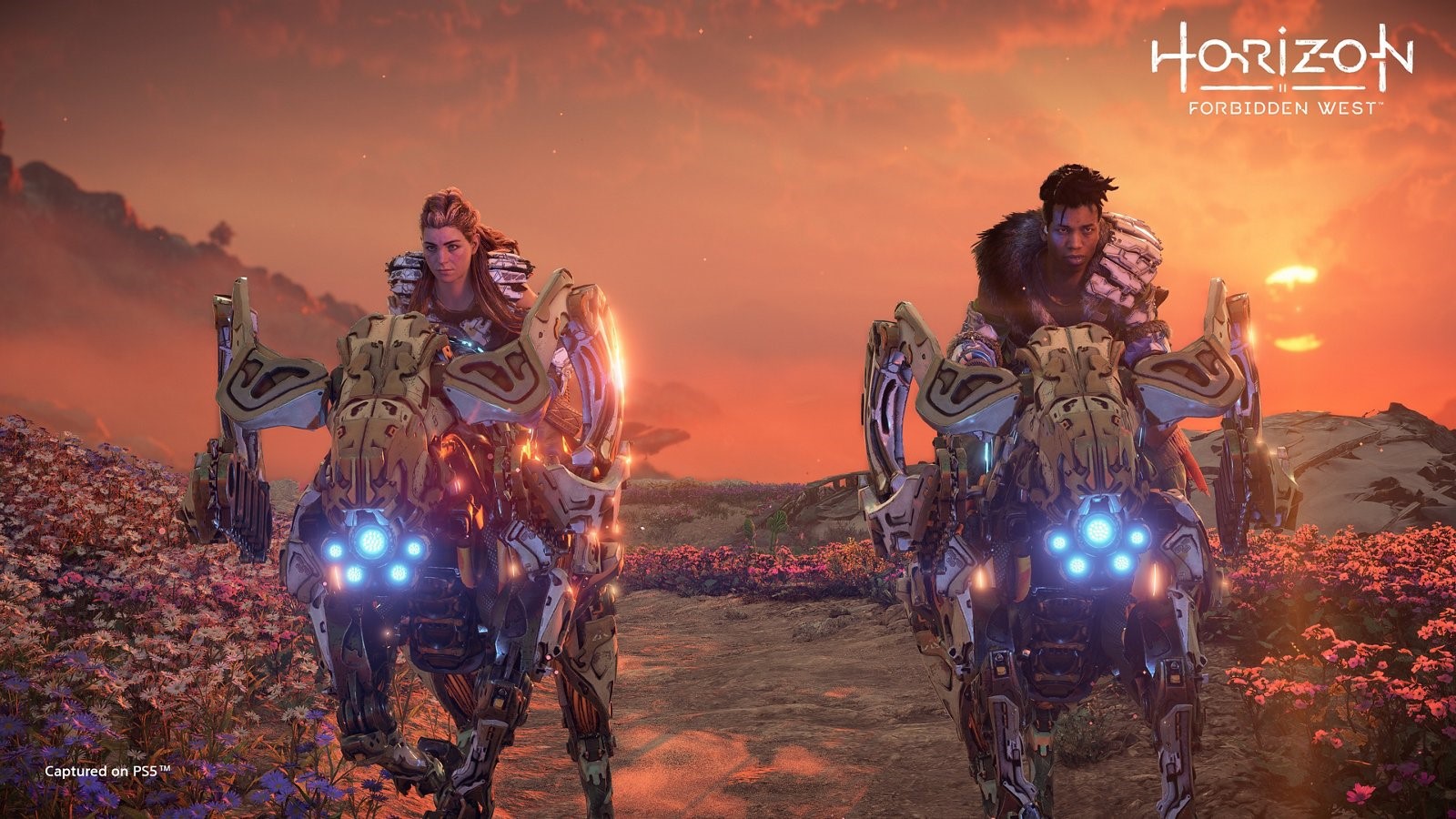 In terms of gameplay, Horizon Forbidden West is very similar to the previous game (which is a good thing), however with tweaks and additions that not only looks amazing on the PlayStation 5 but plays exceptionally well. Furthermore, the developers add haptics to the game which makes your journey more immersive as you explore these large open-world areas with some stunning world design, both on land and underwater, including satisfying combat. Whether this is drawing your bowstring or pushing you way through something physical in the game, it helps you become more present in this virtual world. 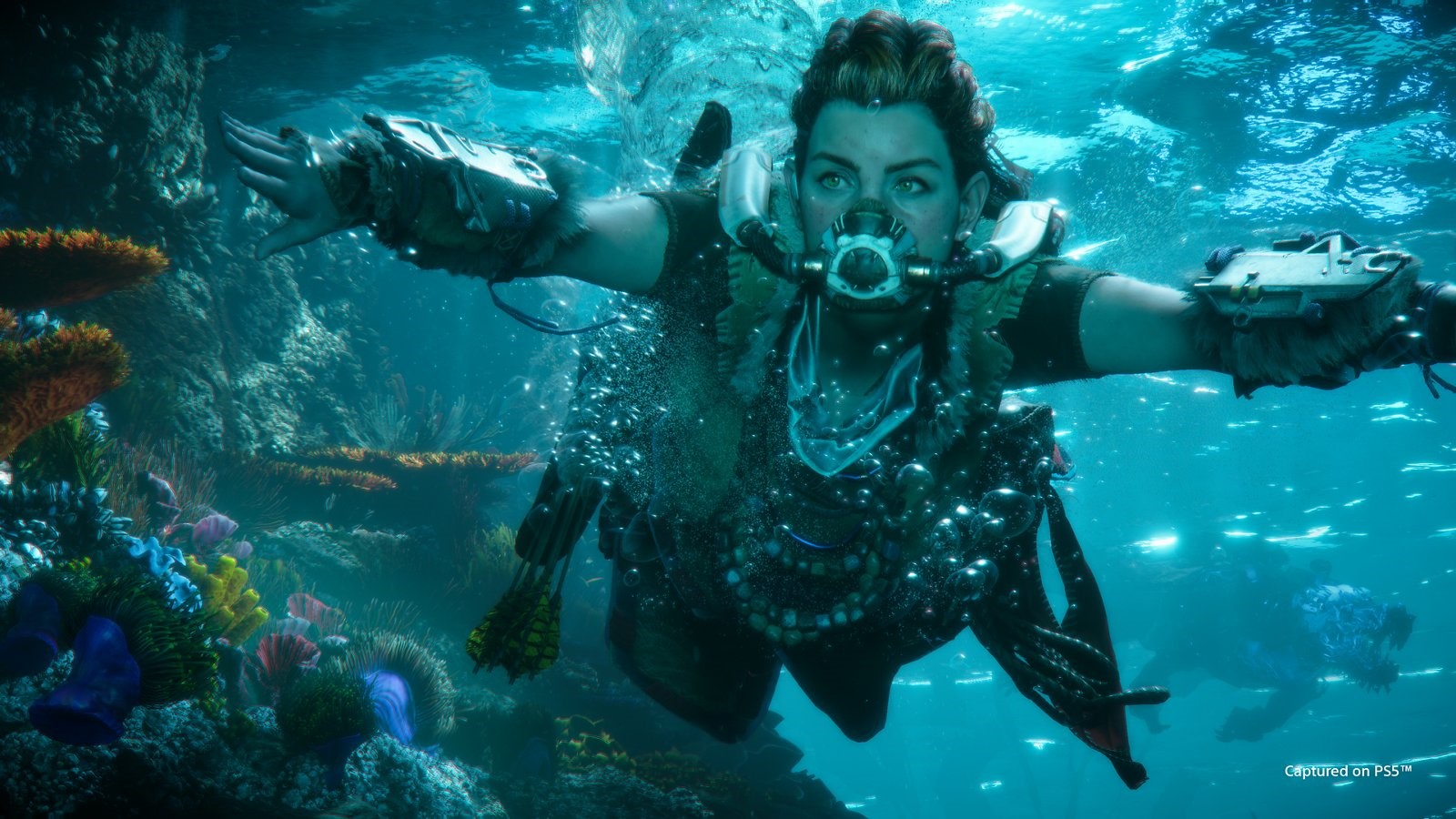 Supporting you, Aloy has access to the Pullcaster (a grappling hook) which allows you to access areas where climbing (some are vertigo inducing) is not possible, including using this device to interact with certain puzzles. Compared to the previous game, the climbing mechanics are a much more fluid experience and doesn’t feel clunky anymore. Another piece of equipment is the AR device dubbed “second sight” that highlights areas that you can interact with, including bringing some of the past to life or if you get stuck, a solution. As you are playing in a post-apocalyptic world, crafting is important and lets Aloy create new items such as potion, weapon upgrades or arrows, including the Pullcaster. Material for crafting can be found throughout the game from your enemies to the plants, including hidden areas and caches, so it’s always worth exploring. With the vast distances in the game, there are creatures such as as mounts to help speed up travel. 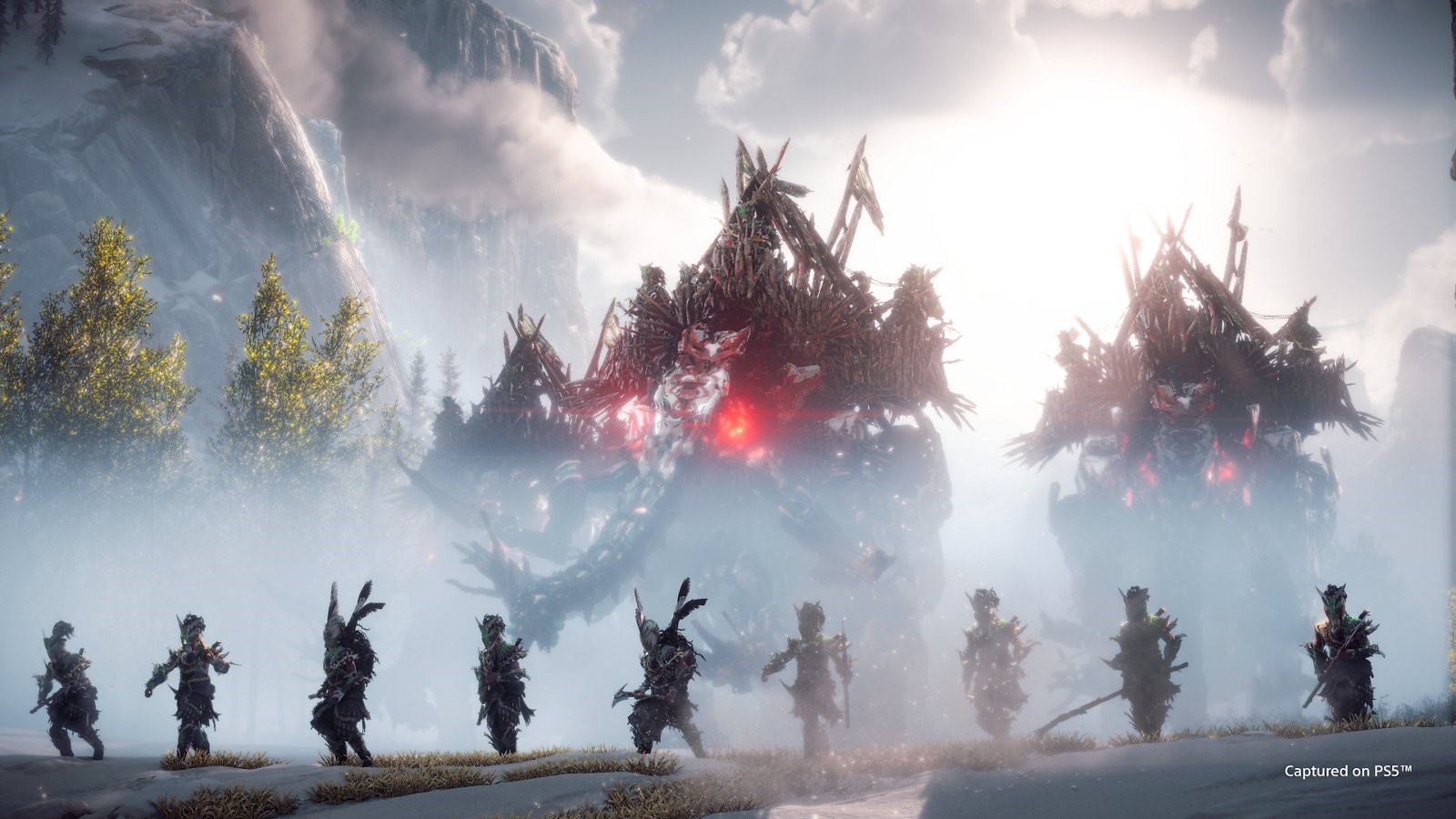 While exploration is an integral part of Forbidden West, including puzzles, it is complimented by the excellent combat mechanics and Aloy’s bow and arrows is still a fun gaming mechanic. Not only does it mimic a real-world bow with the haptics but it’s a flawless integration with the gameplay, including the various enemies that you face make it a joy to use. So move over Hawkeye and Green Arrow! Depending on what difficulty you play this game on, there are a plethora of enemies that you face which can be quite tough, including bosses who really up the ante in terms of challenges. Just be warned that in a perfect Horizon world, range attacks are superior then melee (e.g. your spear) and if you are having trouble defeating an enemy, your second sight can show you their weakness. Adding to the mechanics are new weapons, leveling-up and skill trees to help give Aloy and the player an edge over their enemies. One new weapon, the Spike Thrower is fantastic as it shoots projectile bombs into your enemies that can then be detonated for additional damage and is idea lfor those large dinosaurs that you face. Or my favourite, the boltcaster which is like a machine gun but of course, the bow is still the preferred method of disposing your enemies plus you can make your own arrows and be stealthy that is imperative. All in all, the gameplay is super sturdy on the PS5 and I seriously can’t fault it! 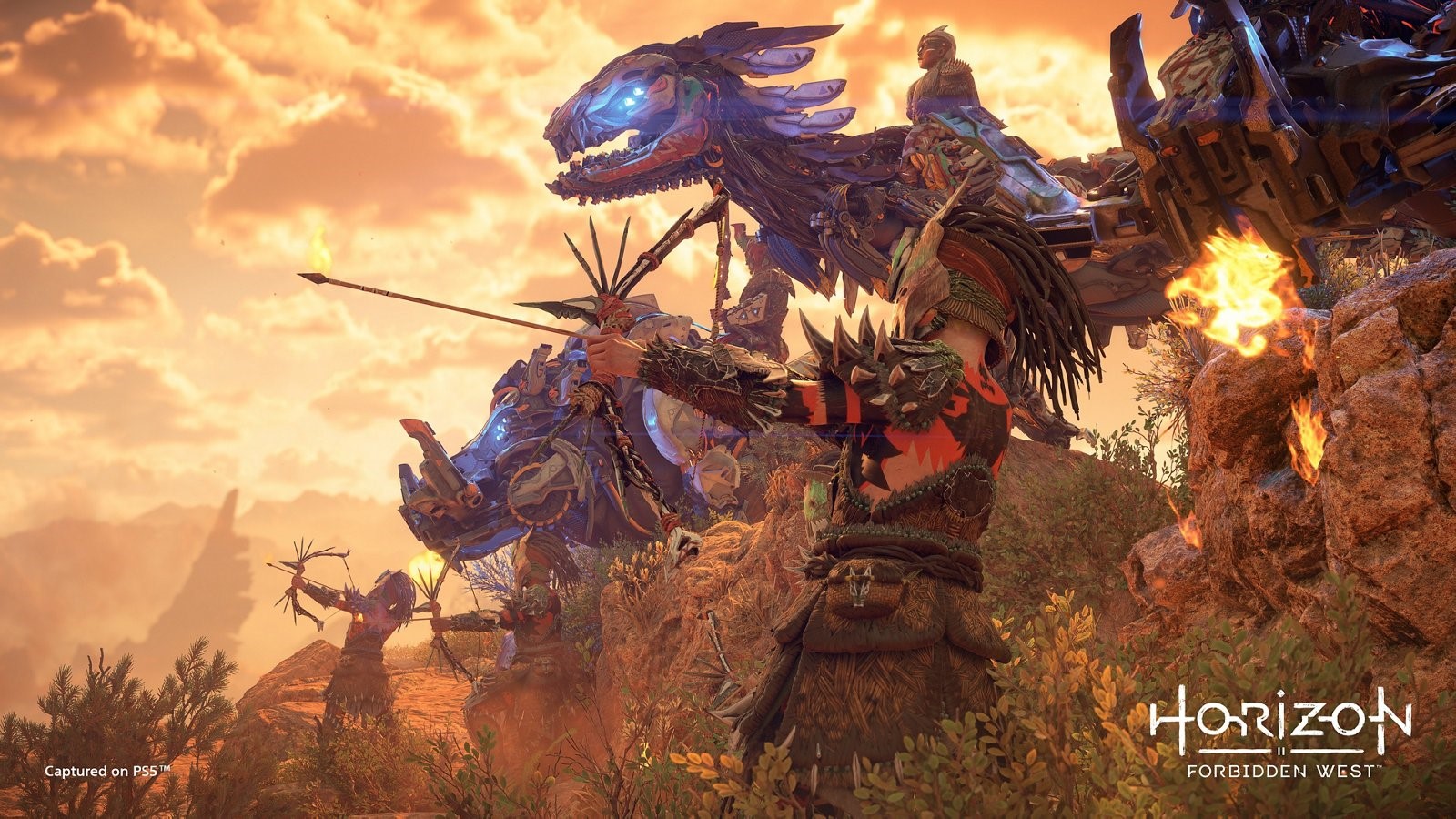 Graphically, the next-gen version of Horizon Forbidden West offers both a Fidelity and Performance mode. The fidelity mode looks amazing on the PlayStation 5 as the entire game is played in 4K at 30 frames per second with some of the best detail to grace this next-gen console. Additionally the attention to detail, even the small detail in the Fidelity mode will you have mesmerised at how realistic this world looks, including its characters, special effects (such as particle effects) and lighting. Character design is fantastic, particularly the realistic and emotional faces of the humans you encounter, including eyes that almost have souls. If speed is your modus operandi, then the Performance mode boasts 60 frames per second at 1080p which is super smooth and while it looks amazing in terms of the detail, you can’t beat the visuals of the 4K Fidelity mode. Adding to this is the excellent soundtrack, voice acting and audio which adds another layer of emotion to this already emotional game. The main actors in the game who lend their voices to their virtual counterparts are Ashly Burch (Aloy), Lance Reddick, John MacMillan, John Hopkins, Noshir Dalal, Angela Bassett and Carrie-Anne Moss. What a line-up? 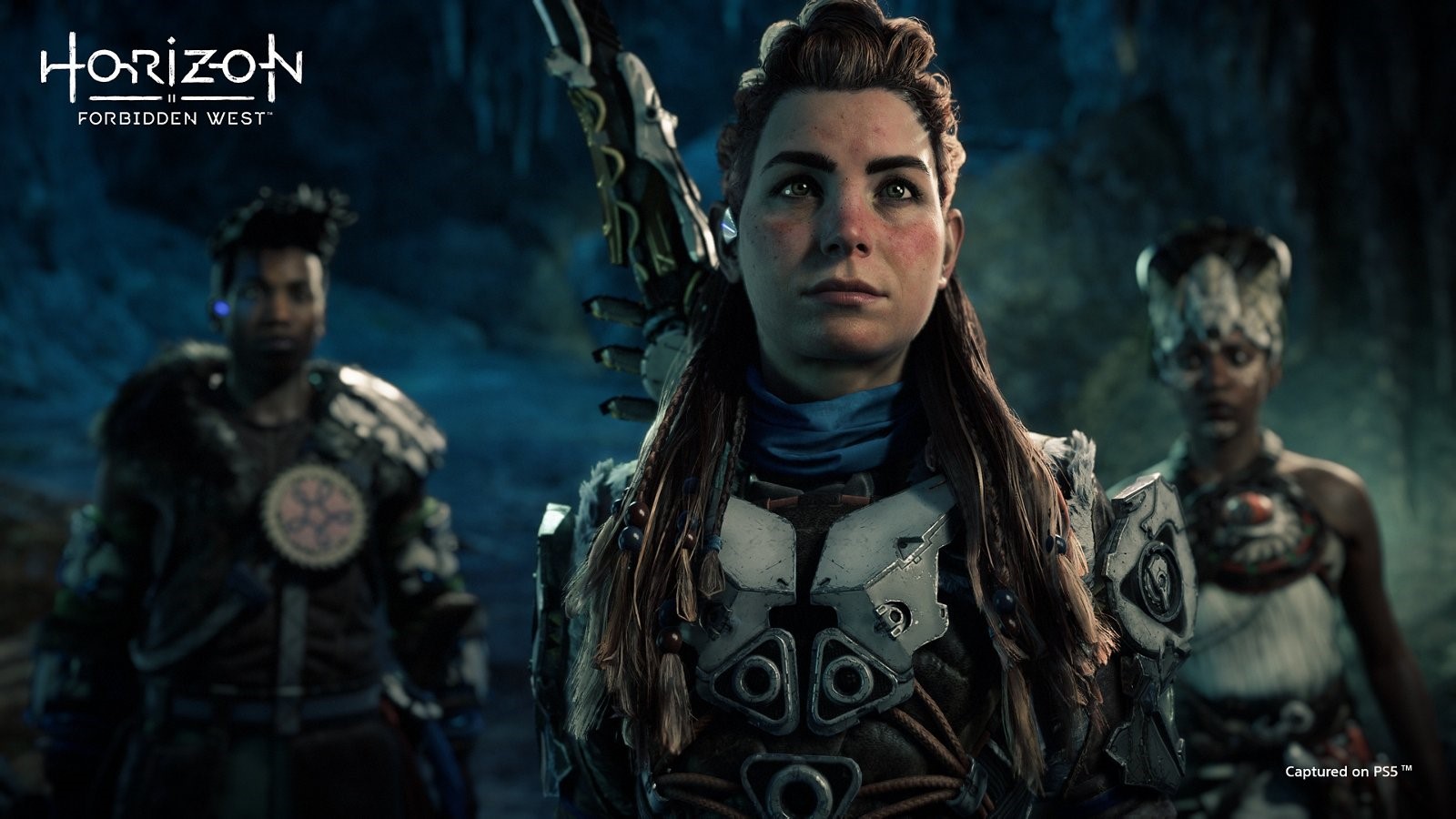 Horizon: Forbidden West is an enjoyable game from start to finish which easily allows you to become lost in its virtual mythology. The gameplay, sound and graphics work hand-in-hand to create an engaging PS5 title. It’s also well-written and directed by the developers with fantastic voice acting and a soundtrack that sounds it has been taken from a Hollywood blockbuster which makes this game a masterpiece on the PlayStation 5 and a must play game… no, masterpiece of 2022! 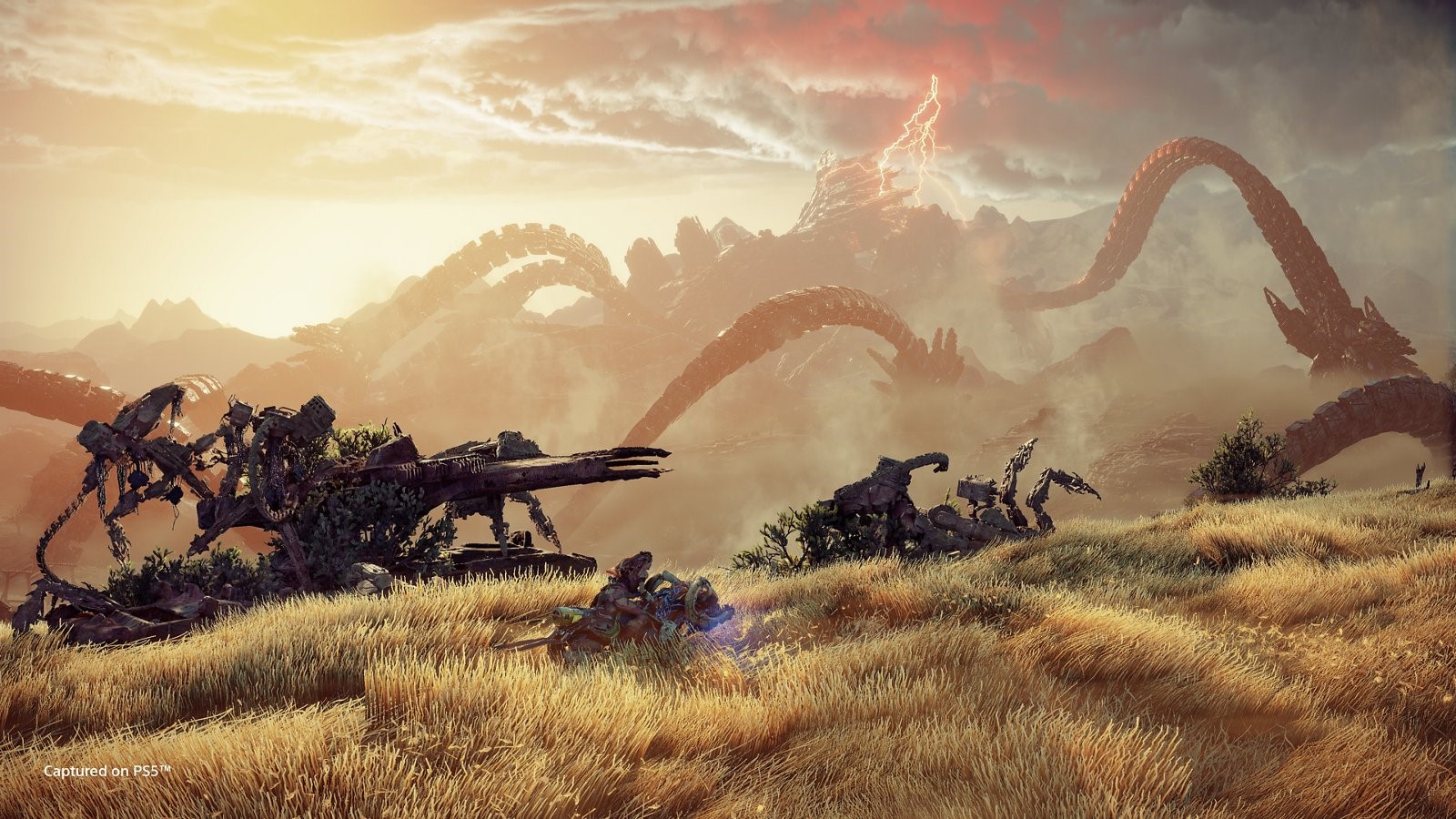