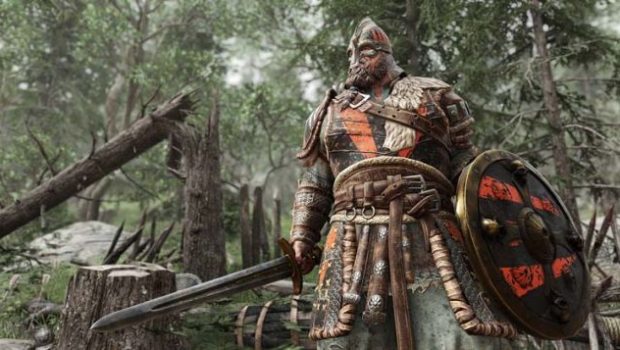 SYDNEY — June 14, 2016 — Today, during the Electronic Entertainment Expo (E3), Ubisoft® announced that For Honor™, Ubisoft’s new action IP in which players embody skilled and deadly elite warriors from the Knight, Viking and Samurai legacies, will be available on February 14. New details surrounding For Honor’s story-driven campaign were also revealed. For Honor, mixing skill with visceral, melee combat through its innovative Art of Battle, will be available on PlayStation®4 computer entertainment system, Xbox One and Windows PC, at launch.

Playable in solo and two-player co-op, online and split-screen, For Honor’s full-fledged story campaign is a tale of warriors in which players will live from the inside a crucial moment in the war amongst Knights, Vikings and Samurai. A thousand years after a huge cataclysm destroyed their world, the Knights, the Vikings and the Samurai have united their scattered forces and what was a rampant conflict is about to turn into a total open war. Embodying the greatest warriors in each faction, players will need all their wits and skill to ensure the survival of their people and foil the plans of Apollyon, the merciless and bloodthirsty leader of the Blackstone Legions. Storming castles and fortresses, turning the tide of massive battles and confronting deadly bosses in intense duels, players will become Heroes of legend, symbols and models for their warrior legacies.

In addition, it was announced during the E3 Ubisoft press conference that players and fans can start registering now at www.forhonorgame.com for a chance to take part in the forthcoming alpha and beta that will happen on all platforms. Registered fans will have a chance to play the game and provide feedback that will aid the For Honor team in providing the most immersive and enjoyable experience at launch.

Deluxe and Gold Editions of For Honor were also announced. With the Deluxe Edition, gamers will be able to dominate the battlefield faster and in style with exclusive content, including gear, customization items, a special execution effect for all heroes, boosters and more. The Retail version of the Deluxe Edition will also provide players and fans with an exclusive lithography and the original soundtrack of the game. Additional details about the Deluxe Edition will be available at a later date.

The Gold Edition will include the base game, the Deluxe Pack items from the Deluxe Edition, plus the full Season Pass.

Developed by Ubisoft Montreal in collaboration with other Ubisoft studios*, For Honor offers an engaging campaign and a thrilling multiplayer. Players embody warriors of the three Great Factions – the bold Knights, the brutal Vikings and the enigmatic Samurai – fighting to the death on intense and believable melee battlefields. Leveraging the Art of Battle, For Honor’s innovative combat system that puts them in total control of their warriors, players can use the unique skills and combat style of each Hero to dominate all the opponents who stand in their way.

To get the latest news and content about For Honor and have a chance to play the game first, please register at www.forhonorgame.com.

For the latest on all of Ubisoft’s games, please visit www.ubiblog.com.