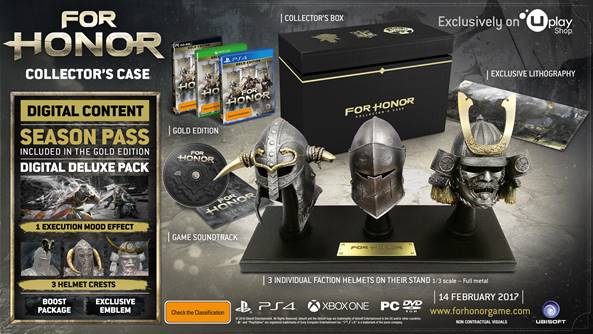 Ubisoft® has debuted its full roster of 12 playable heroes in For Honor™, the critically acclaimed new action IP at Gamescom. The Knight, Viking and Samurai legacies will each feature four true elite warriors, capable of making a major difference on the battlefield. In addition to the full-fledged story campaign revealed at E3 2016, For Honor includes five engaging Multiplayer modes: Dominion, Brawl, Duel, Elimination and Skirmish.

For Honor embarks players in the chaos, fury and brutality of ruthless, visceral close-quarter combat featuring the brutal Vikings, the deadly Knights and the cold-blooded Samurai. In each faction, players will be able to choose among four different types of Heroes:

–   Vanguards are well-balanced Heroes, with good attack, and defense capabilities and great versatility.

–   Heavies are the most resistant Heroes, their attacks are slow but deadly. They’re especially efficient for defending a point and annihilating AI enemies.

–   Hybrids mix elements and characteristics of other types. They are advanced characters fostering uncommon tactics

Heroes come with their own set of skills, weapons, armor and fighting style. With a wide library of customization options, players are able to personalize their Heroes to not only look and feel unique, but also tailored to their combat style.

For Honor’s in-depth progression is unique to each Hero, with select elements shared across PvE and PvP gameplay modes. At the end of each multiplayer match and each campaign mission, players are awarded XP that unlocks new combat abilities and new visual customization options. They also have the chance to loot armor and weapon parts on the battlefield, with specific stats allowing each player to adapt their gear to their playstyle while ensuring fairness and balance in multiplayer.

For Honor’s multiplayer modes are playable with and against other players or bots in split-screen co-op on consoles. These multiplayer modes offer each player a different way to live the fantasy of being a skilled melee warrior on a believable battlefield:

Ubisoft is pleased to announce that For Honor on PC is being developed by Blue Byte, a Ubisoft Studio. Blue Byte is devoted to create a tailored and fully optimized experience on PC platforms that supports mouse and keyboard controls, giving PC players the option to choose how they play For Honor.

Ubisoft® also revealed the content of the For Honor Collector’s Case, a Uplay exclusive. Players will follow the path of the warriors and dominate the battlefield with the For Honor™ Collector’s Case, which contains premium digital and physical content along with three 1/3 scale full metal faction helmets replicas and the Season Pass. For Honor will be available on PlayStation®4 computer entertainment system, Xbox One®, and Windows PC on February 14th, 2017.

The Collector’s Case of For Honor will offer:

For Honor will be available on February 14, 2017 on PlayStation®4 computer entertainment system, Xbox One and Windows PC.