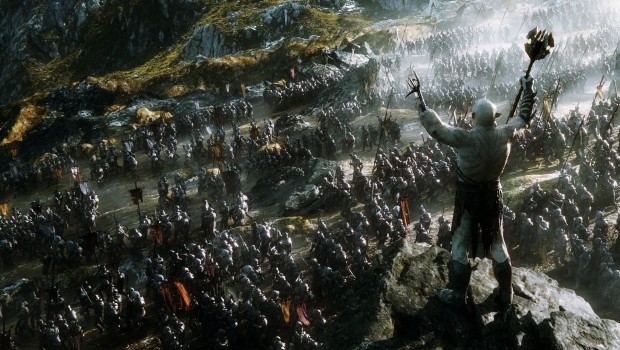 The Hobbit: The Battle of the Five Armies (HFR 3D) – Film Review

The Battle of the Five Armies isn’t the worst of the three Hobbit films as some are calling it but it’s undoubtedly flawed. It is the last in the trilogy and twenty minutes shorter. Its flow and pacing seem smoother with fewer stoppages that crippled the last two films. But the director Peter Jackson still hasn’t solved several reoccurring problems which have plagued this saga. The film is more action than plot driven, which means the title character Bilbo is again promptly dwarfed in his own story. On a technical level Five Armies is inconsistent due to the distracting and unnecessary HFR (high frame rate) 3D format the film was screened in and also some of the flagging computer graphics. They are starting to show their age, with the monsters now looking more glaringly computer generated than threatening. Perhaps this is the problem with these films now. We’ve spent so much time in Middle Earth, meaning there are fewer surprises and our eyes hold the images in higher scrutiny than ever before.

Each entry in The Lord of the Rings once felt essential, even mysterious. Its world was unknown and unfolded excitingly before our eyes. That time has long past. Many have rightly continued to ask why a children’s book needed to be turned into a bloated trilogy, a question bound to be prolonged by Jackson’s decision to use Tolkien’s appendices for this episode. The plot doesn’t start well. It cheapens the ending of the previous film. The Desolation of Smaug concluded with the Company reaching the Lonely Mountain, where they awakened the dragon Smaug and the beast swooped down to attack Lake-town. At the beginning of Five Armies, Smaug is disposed of too hastily for such an impressively designed creature. But things improve once the film discovers some thematic purpose. Greed and cowardice are more pertinent than before. The Dwarf leader Thorin Oakenshield (Richard Armitage) has become possessive, with the riches and his search for the Arkenstone sending him mad. Bilbo (Martin Freeman) is secretly holding onto the gem out of respect to the other dwarves laying claim to it. Thorin also walls off the kingdom to outsiders who lost their homes to Smaug’s attacks. They’re essentially wartime refugees. Thorin’s slogan could have been: “Stop the Orcs”. While the five armies, consisting of multiple races, battle waves of Orcs, Thorin refuses to fight. A side character Alfrid (Ryan Gage) also dresses up as a woman and hides gold in his costume to also avoid combat. The comedy doesn’t work but the ideas are clear. 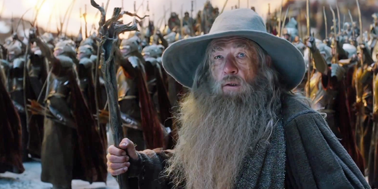 Five Armies also salutes male identities, defined by bravery and leadership, and its film’s self-serious approach is unintentionally hilarious at times. The biggest laughs are from Orlando Bloom’s stony-faced, monotone deliveries of silly Middle Earth names. It’s also funny seeing Thorin and company run out to fight the Orcs. They look like a football team storming out onto the oval. There are deliberate laughs too, courtesy of Martin Freeman’s performance whose effortless quips and nervous stutters are funny but tonally almost from a different film. Once the plot recedes the combat takes over and Jackson’s real passion is on display: slaying Orcs in various ways. The combat sequences move smoothly enough but the 48 FPS format removes a lot of the punch and impact and the CGI is inconsistent. Overall, what these three Hobbit films have missed compared to the first trilogy is the heart and the smaller moments of conflict. They’ve been a showcase for huge battles and a gallery of monster types but nothing has matched the warmth and the dramatic stakes of Frodo and Sam’s friendship. Is this the end of Middle Earth onscreen? It looks like the waters are safe for now and this might be the last film. But even a movie as silly and generally superfluous as this realises gold and riches have great swaying power.

Summary: The Battle of the Five Armies isn't the worst of the three Hobbit films as some are calling it but it's undoubtedly flawed.