Summary: Hob: The Definitive Edition adds a number of quality of life improvements to a solid Action-Platformer with an impressive aesthetic.

When Hob was first released back in 2017, I feel like it was unfairly panned by critics for being an unremarkable, yet wholly competent Action-Platformer that failed to live up to expectations set by the developer’s previous work. I thoroughly enjoyed my time with Hob when it was first released and the Definitive Edition version for the Switch is the perfect excuse to dip back in and explore the intricate world of Hob with a number of improvements. 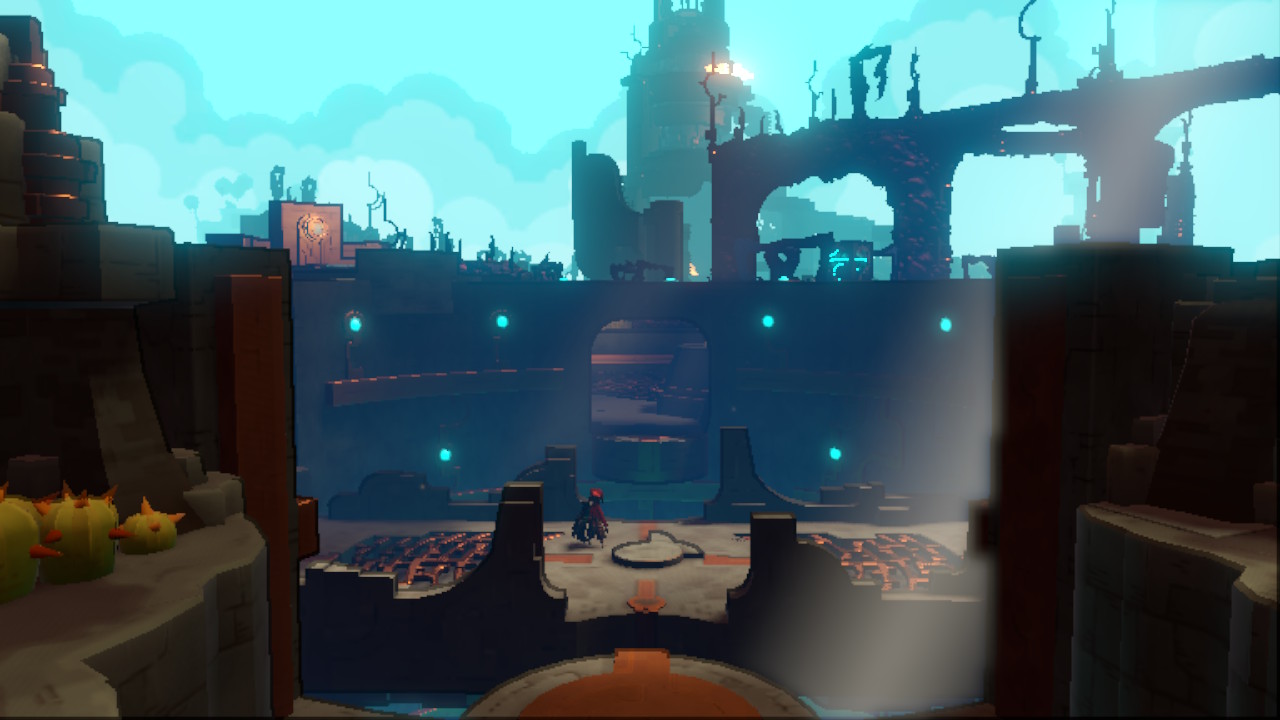 Hob is a 3D Action-Platformer game with a philosophy of subtlety when it comes to environmental storytelling and player guidance. Developers Runic Games (creators of the Torchlight series), tout the complete lack of narrative dialogue or text as one of the game’s main features. Instead of traditionally extensive back-and-forth text boxes or droning dialogue exchanges, Hob uses expressive character animations and cinematic techniques to convey the emotions and motivations of its cast of characters. It’s an admirable goal that works well to convey some intimate character relationships, but ultimately fails to deliver an overarching narrative that draws the player in, and often left me asking the question of ‘why am I doing this?’ 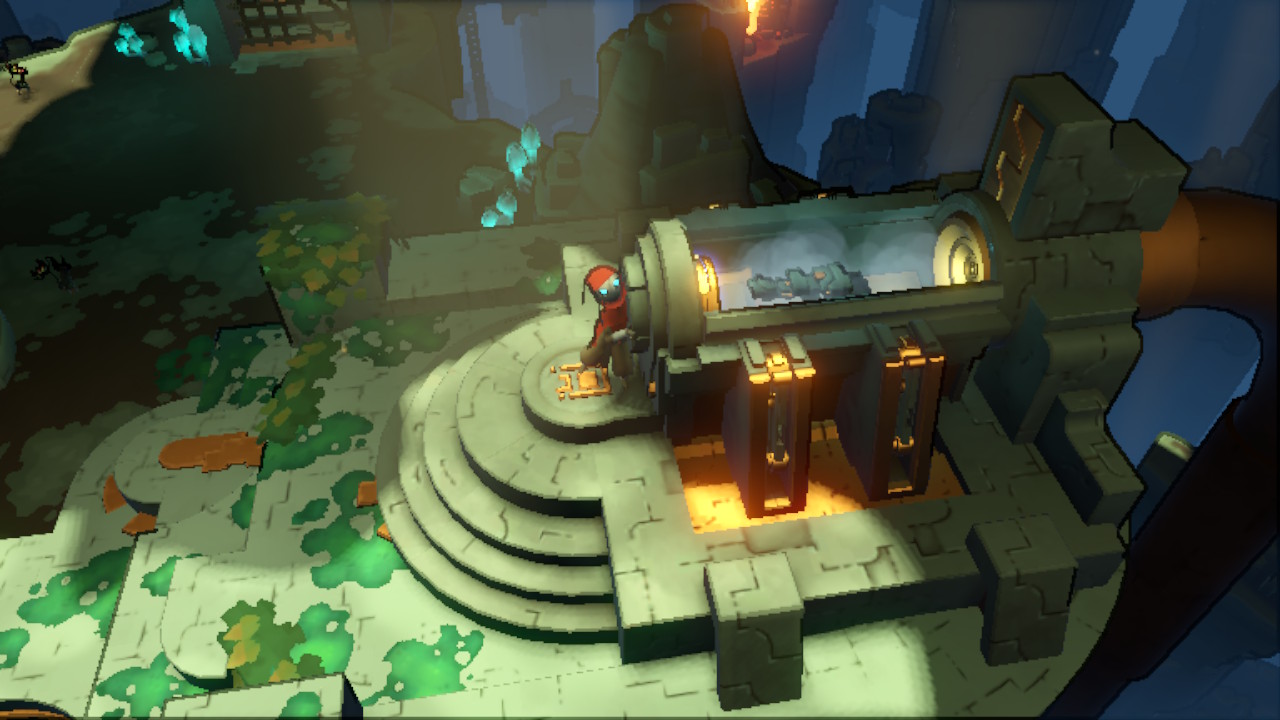 The majority of the gameplay in Hob revolves around exploring labyrinthine areas and completing platforming challenges. The platforming mechanics feel just right, as the nimble player character moves with quick precision and the predictable jump arc makes platforming sections feel excitingly tense. Some timed platforming sections did feel frustrating after multiple failed attempts, but the generous respawn system (improved with the Definitive Edition update) ensures that a second attempt is mere seconds away. 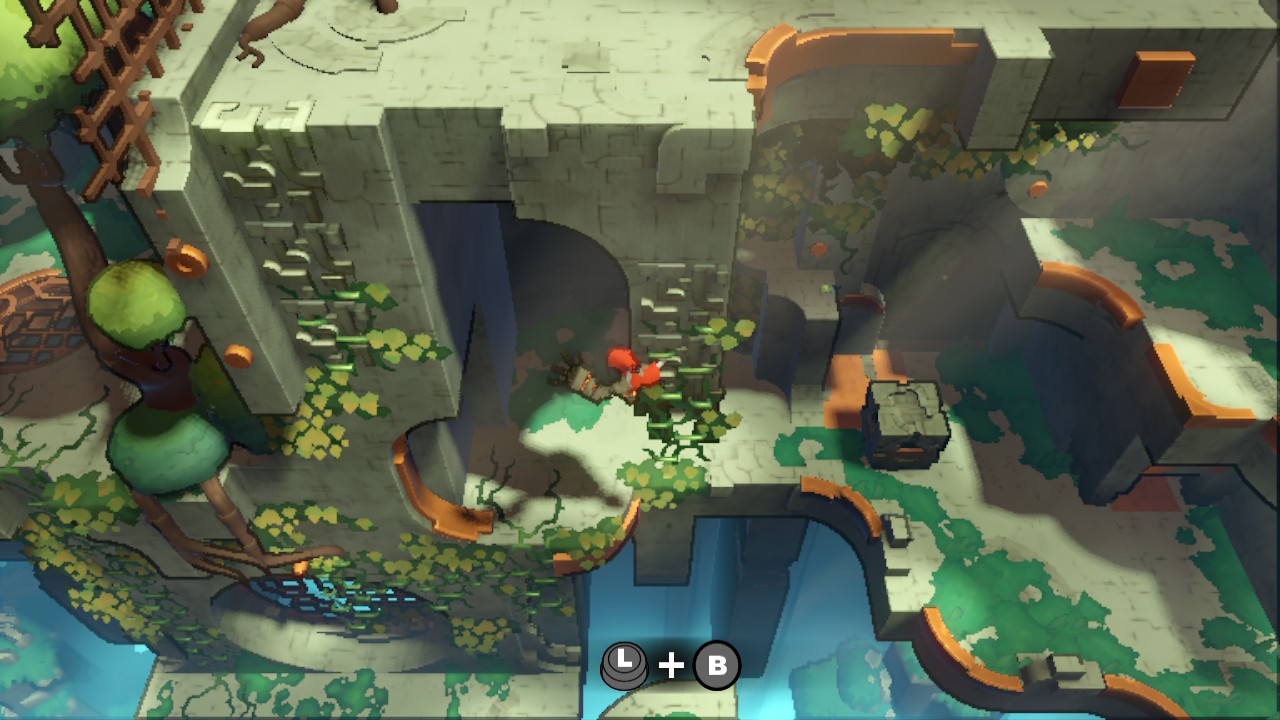 Hob takes place in an expansive and varied landscape with a Metroid-esque open-world of interconnected corridors and large spaces. Many of these pathways can’t be accessed until you unlock a certain item or complete a set task, however Hob’s ‘hand’s off’ approach to guiding the player to the next point of interest often swings between satisfying and frustrating. 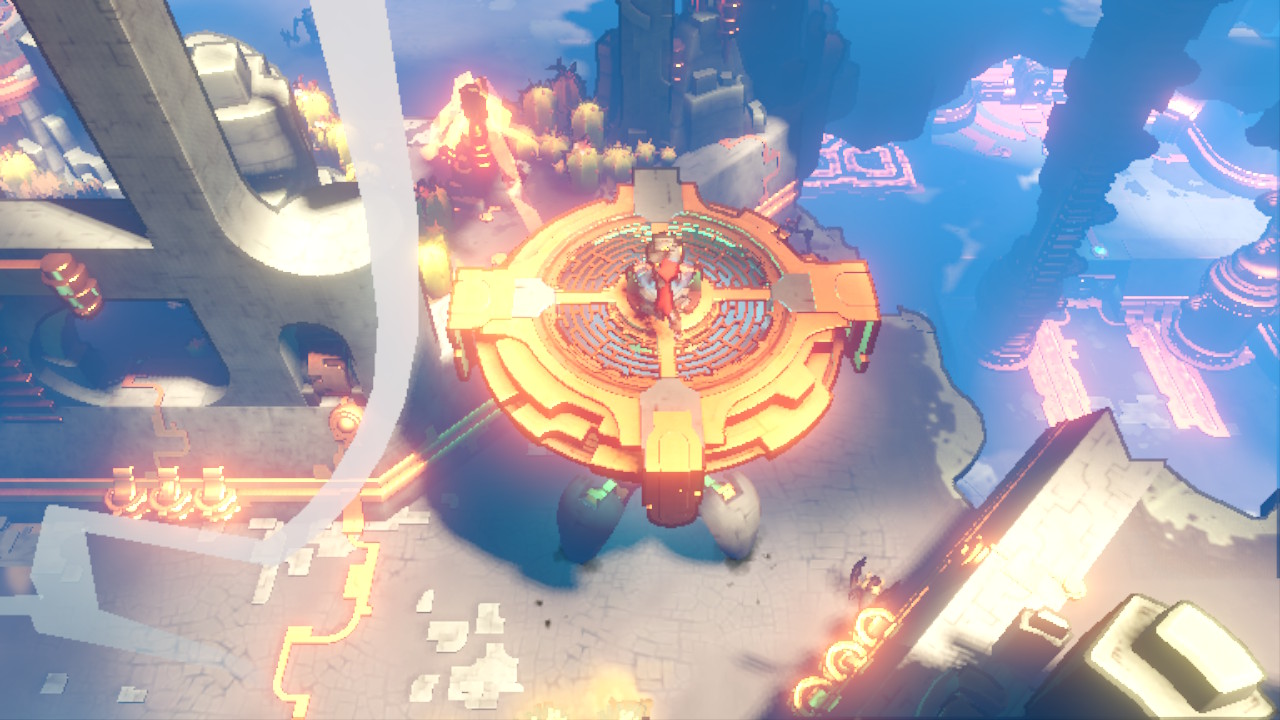 Subtle environmental cues such as faded paths in the dirt or markings on a wall are designed to draw the player’s gaze towards a particular direction and prompts the player to explore every corner of the map. If one pathway doesn’t directly lead to the next objective, it will undoubtedly reward a hidden health upgrade or a cache of points that can be used to purchase skills. Unfortunately this lack of signposting and subtle guidance clues can often lead to frustrating segments of wandering around, looking down every corridor, not knowing if you’ve missed a switch or an obscured doorway. However in my experience with Hob, these moments aren’t the norm and exploring the map is a fun and worthwhile endeavour. 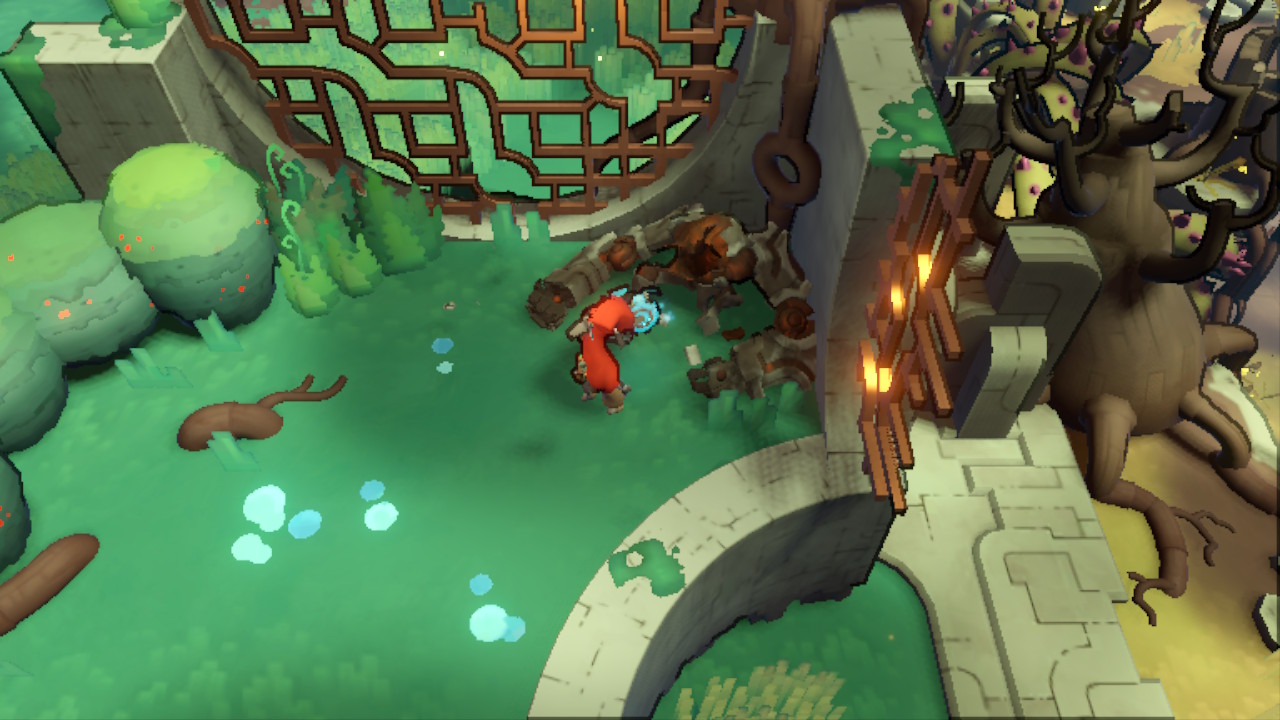 Hob’s gorgeous art style and unique world-design aesthetic is what makes this exploration so exciting. Each of the land’s biomes have interesting, stylised designs with bright, bold colour palettes that makes every little feature pop. There’s also a strange angular design to all the environmental details such as trees and boulders that looks really cool and plays into the techno-nature vibe to make the world feel fascinating. 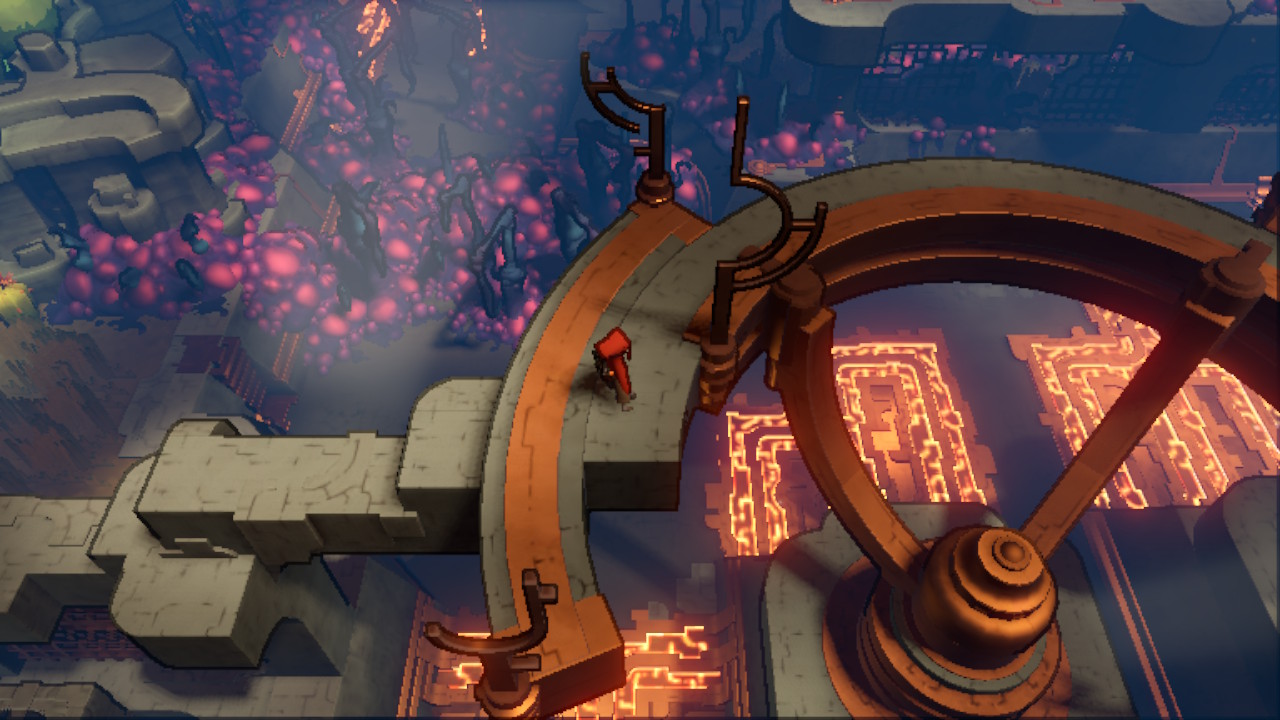 Unfortunately this gorgeous art style and large environments come at a heavy cost to the Switch’s hardware capabilities. Hob is very noticeably rendered at a lower resolution when playing in handheld mode compared to when playing docked. It’s a common issue with many Switch ports and doesn’t detract from the gameplay (aside from a few frame rate dips in certain sections), but it still stings to know the game looks far superior when playing docked. 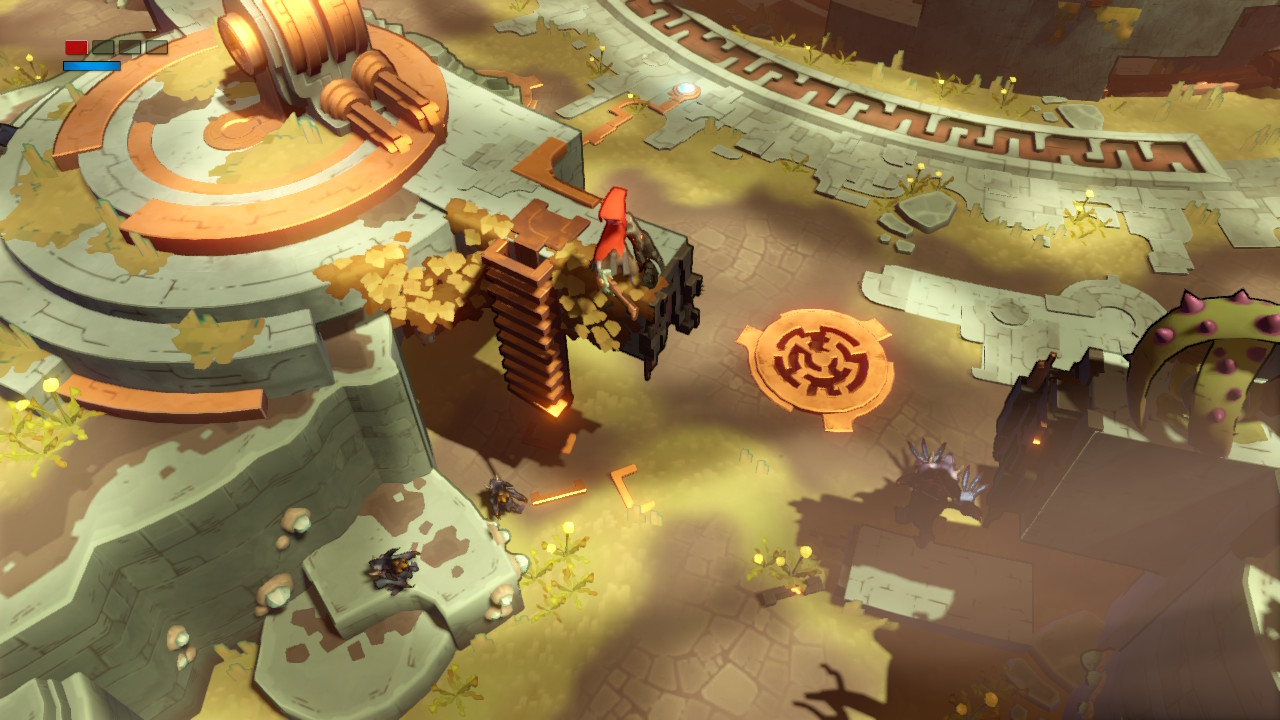 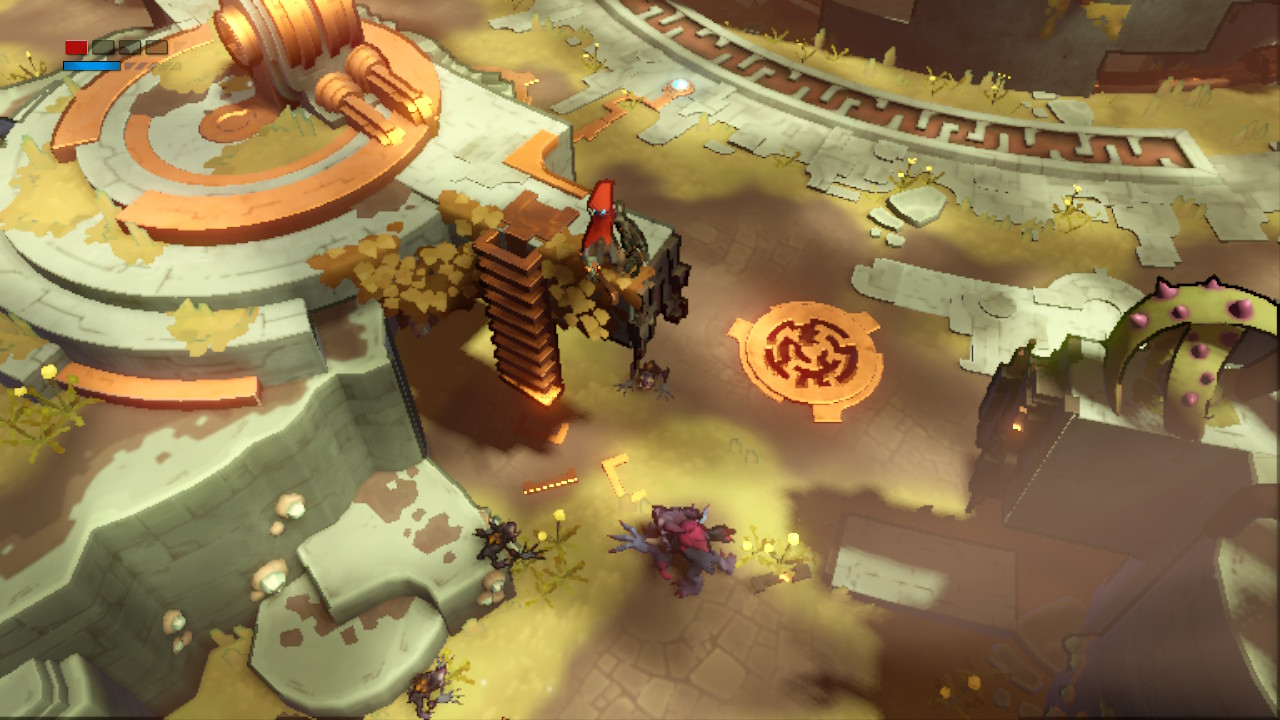 Hob’s combat system comes second to its platforming and exploration, as the combat encounters frequently left me feeling unsatisfied and unchallenged. The player character controls like an isometric brawler with all the standard abilities: a short-range sword slash combo, a sprint button, a dodge roll, a jump, a shield and an upgradeable gauntlet attack. Yet the majority of combat challenges can be overcome by simply mashing the sword attack and rolling away when the enemy winds up to strike. The Definitive Edition update comes with a slew of quality of life features that sound fantastic on paper, but overall doesn’t make the game feel noticeably different to when I first played it back in 2017. With improvements to UI and environmental guidance details, The Definitive Edition is undoubtedly the best way to play Hob right now, but nothing has been added to warrant a second look if you weren’t interested upon the game’s initial release. Hob: The Definitive Edition is a great excuse to check out this often overlooked, solid Action-Platformer. The combat and narrative may be a tad superfluous, but the platforming is a lot of fun and the gorgeous art style makes the world exciting to explore. The Definitive Edition mainly includes quality of life features that are likely to go unnoticed if you played through the original release, but the added features make this the obvious version to pick up if you’re looking for some light-hearted platforming to immerse yourself in.