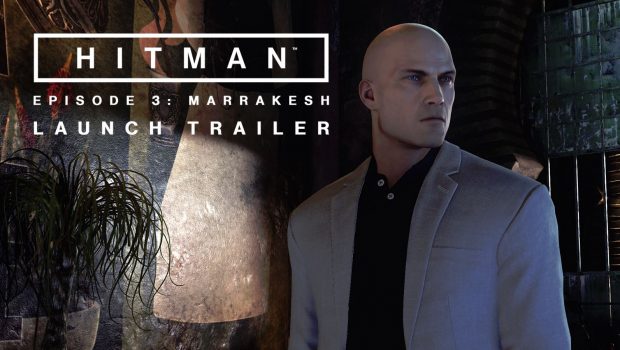 The featured mission, ‘A Gilded Cage’, sees Agent 47 travel to the busy market city of Marrakesh to target corrupt private banker Claus Strandberg and his accomplice Army General Reza Zaydan before the city of contrasts collapses into a riot.

“Marrakesh marries the concepts of the first two offerings of HITMAN – Paris and Sapienza,” said Hannes Seifert, Studio Head at Io-Interactive. “We have the fortressed, at times claustrophobic, nature of the Showstopper event in Paris combined with the expansiveness and lived-in feeling of Sapienza all in one. I think Marrakesh is really going to give players a lot to explore and experiment with.”

Marrakesh offers a richly detailed, dense creative stealth sandbox featuring two targets, a host of opportunities and challenges to explore and a living environment that transports you from crowded markets to magical souks, from the cool elegance of the Swedish consulate to the military-occupied remains of an abandoned school. Infiltrate a consulate under siege to kill a man everyone hates and take out the army general that freed him from his prison shackles in Episode 3 of HITMAN.

HITMAN started with a Prologue and the Paris location in March. Episode 2: Sapienza released in April and now Episode 3: Marrakesh has arrived in May. HITMAN will continue to deliver regular content updates, including three additional locations; Thailand, the United States and the season finale in Japan later in 2016. The game also recently launched the new “Elusive Targets” feature, with two targets encountered by players so far…Marrakesh is sure to hide more.

Marrakesh is FREE as part of the Full Experience Pack. Owners of the Intro Pack can choose either the Upgrade Pack, which will then include all of this year’s content as it’s released including live and bonus content – or choose to purchase the location individually.