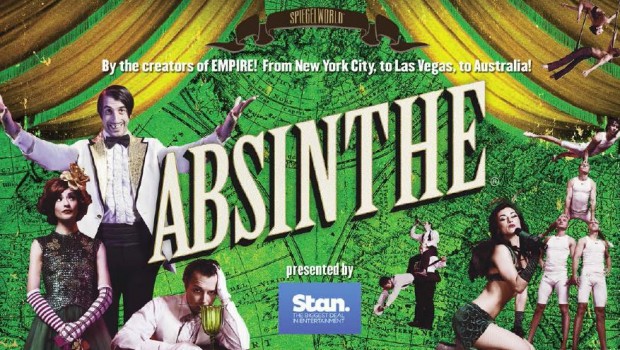 Spiegelworld has arrived in Australia and the team is busy preparing for the opening of its smash-hit Las Vegas show ABSINTHE, a follow-up to its record-breaking show EMPIRE which was seen by an incredible 200,000 Australians.

The Australian tour of ABSINTHE, presented by Stan, will open in Newcastle on February 17 2015 under the beautiful spiegeltent at Wheeler Place, followed by seasons in Melbourne, Brisbane, Perth and Sydney with other dates to be announced.

Inspired by the absinthe-drenched cabarets of late 19th century Europe, ABSINTHE is an adult-themed cocktail of circus, comedy, burlesque and vaudeville for a 21st century audience. In Las Vegas, the show has been playing to sold-out audiences at the world’s most famous casino, Caesars Palace, since 2011 and celebrates its fourth anniversary in April. Celebrities regularly flock to join the audience and have recently included Britney Spears, James Franco, Neil Patrick Harris and Olivia Newton-John.

Australian audiences at ABSINTHE will be treated to three new international acts, specially hand-picked for this national tour, which will join the show’s line-up of jaw-dropping acts which have been wowing Las Vegas crowds.