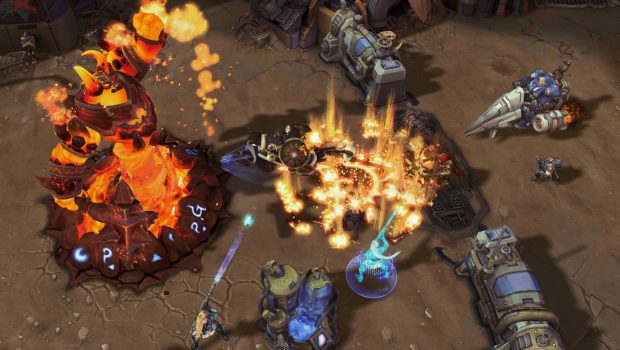 Fan favourite Battleground, Haunted Mines, returns to Heroes of the Storm today! This Battleground has been completely reworked, doubling the number of mine entrances; tweaking the golem; adding Sapper mercenaries, and much more! Find out more about all the changes in our blog post here.

New hero, Ragnaros, is now available in Heroes of the Storm! Players can purchase Ragnaros with in-game currency, using real money, or try for free using the in-game shop.

From deep within Sulfuron Keep in the Firelands, Ragnaros has turned his fiery gaze toward the Nexus in his conquest to bring about the end of days by purging all life in flame and ash. Harness the volcanic wrath of The Firelord to call down flaming meteors, crush foes with the explosive might of Sulfuras, and summon lava waves that will incinerate an entire lane’s worth of enemy minions. When faced with a counter-attack, Ragnaros can empower a Fort or Keep, becoming a towering inferno over the structure, and gaining a second set of abilities that will help you engulf assailants in the fires of doom. Ally yourself with Ragnaros to bring about a new era of destruction in the Nexus and show your opponents the true meaning of the words “raid boss”.

We’re approaching the end of another year, but the holiday season is just beginning in the Nexus. Join us from today, through January 5, 2017 AEDT, for a Winter Veil event that brings a virtual stocking-full of gifts to heroes all over the globe!

On November 16 we kicked off the Nexus Challenge! Running until January 4, 2017, players can earn in-game items for both Heroes of the Storm and Overwatch by taking part in Heroes matches with friends in Co-op vs. AI, Quick Match, Unranked Draft, or Ranked modes. Completing 15 games in Heroes of the Storm automatically unlocks tank character, Zarya, and an Oni Genji Portrait, as well as an Overwatch Oni Genji skin, portrait, and spray. Completing a total of 30 games further rewards players by permanently unlocking Auriel, Greymane, Kerrigan, and Li-Ming in Heroes of the Storm, as well as an Orochi Hovercycle Mount and 30-Day Stimpack.