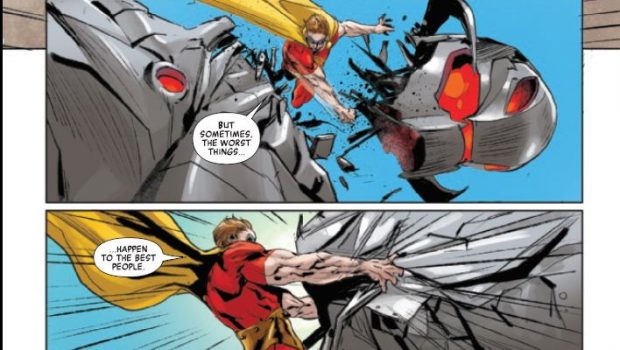 Summary: How much you get out of this one depends on how much you like Spider Man. I want photos! Photos of....uhh

The Heroes Reborn series explores a timeline where none of the Avengers ever existed, in this case Peter Parker does not get his famous spider bite and instead joins the newspaper as a photographer instead. He still has his amazing intellect and uses that to get ahead and save the day.

While the premise of having a story where the main character does not end up having super powers does not seem that great, they still make it work in this case. Bad things still happen to people but it seems like they were destined to happen no matter what.

Spider Man does seem to have the most reboots and parallel storylines of any character in the Marvel universe and that is saying a lot. I don’t really get people complaining how they “reboot” the movies too much, it is not half as many times as they have done it in the comics.

Maybe this one is more for big fans of Spider Man who want to see something different with this character that has not really been done before. Everyone else maybe pass over this one if you want to see more action.