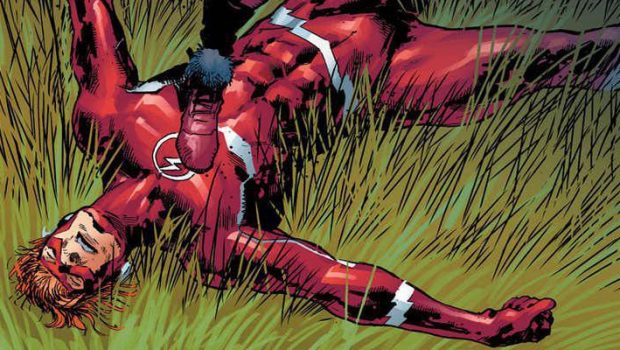 Summary: Heroes in Crisis #4 continues its slow burn to a revelation.

Okay…all Ralph Break the Internet gags aside, this comic has split the world of fandom and although I’m not a fan of King and co. killing The Flash (Wally West) or a handful of other heroes to promote the story, I’m still intrigued to see what they have planned. However with that said and if the film Aquaman is an indication of what fans want compared to Justice League, this darkness in the DCU needs to be purged. Given that, I’m betting that this darkness in this series is either a simulation gone wrong or perhaps Psycho Pirate messing with the DCU?

Nonetheless, we’re not here to split atoms but talk about a story which is Heroes in Crisis #4 that opens up with a drunken Tempest obviously drinking his sorrows away after the death of fellow Titan members The Flash (Wally) and Arsenal (Roy Harper) from their visit to the sanctuary. Like previous issues, we also get flashbacks of other heroes disclosing their secrets to the AI of sanctuary such as Donna Troy, Blue Beetle and Batgirl.

Back in the present, The Flash (Barry Allen) and Batman (Bruce Wayne) believe they each know who the mass murderer of heroes is with Barry pointing towards Booster Gold and Batman stating that is Harley Quinn, with these two characters being the only two survivors of this incident. Elsewhere Wonder Woman is interrogating Booster with her Lasso of Truth and uncharacteristically paints this hero as both a thief and coward, even though he is forced to say the truth with the magic of the gods.

Although still a suspect, Booster seeks the solace of his best friend in the 21st century, Blue Beetle (aka Ted kord) where he informs Ted that maybe he did commit this crime but strongly believes that he didn’t which is how he may have tricked the Lasso of Truth. Although Blue Beetle does ask his friend if he did, he does break him out of the Hall of Justice courtesy of his Bug in a classic scene where he cleverly says bros before heroes.

Back in Metropolis, someone is still sending Lois Lane videos of the heroes and villains who visited The Sanctuary and that the sender is called the ‘puddler’. Lois asks her husband what should she do and that if she does not post this news that someone else will which Clark agrees. Harley who is on the run from the heroes of the DCU seeks support from Batgirl where they go through a faux battle before we learn that Harley Quinn is hurting from being labelled a murderer of heroes which she adamantly denies and believes that Booster Gold is the true culprit.

One of the final scenes in Heroes in Crisis #4 has the DC trinity meeting in the Batcave where a frustrated Wonder Woman smashes Batman’s giant coin onto what appears to be the classic Batmobile of the 60’s due to Blue Beetle breaking his buddy out of the Hall of Justice. To make matters worse, Superman discloses about the security breach of The Sanctuary and that someone is sending Lois the videos. Needless to say, Batman is pissed and this information is about to be released by the Daily Planet today.

The latest issue of Heroes of Crisis continues unveiling the mystery surrounding The Sanctuary, however the facts and progression in this issue is very slow and did feel like a filler. Also, the characterisation of Wonder Woman was skewed, including some of the other heroes but nonetheless, it was still an interesting read with some decent dialogue and amazing art by Clay Mann who really brings the story to life with some spectacular scenes. 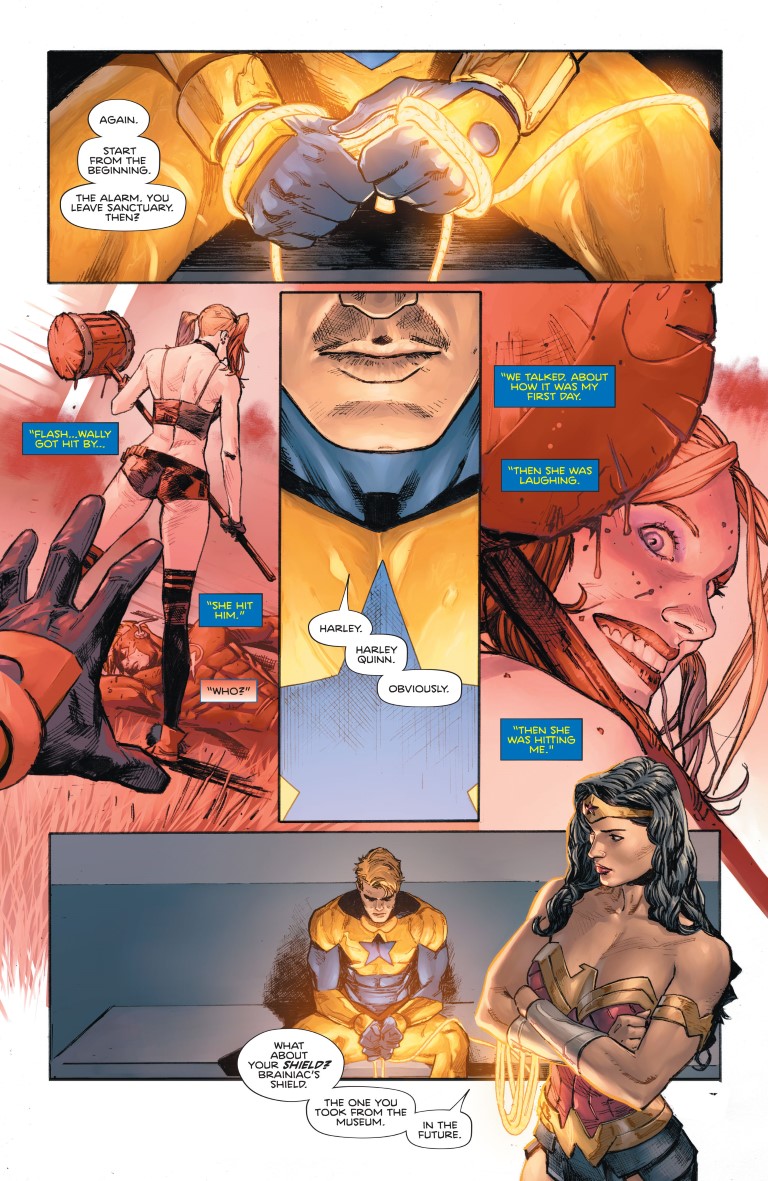 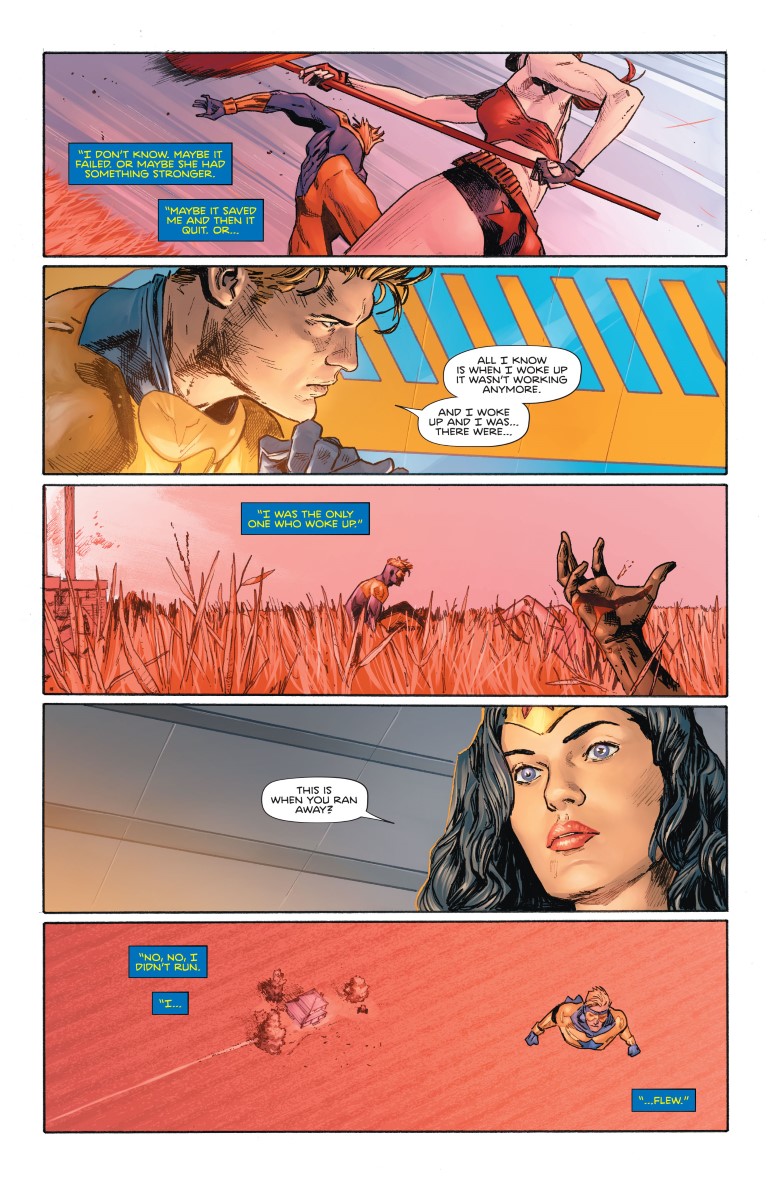 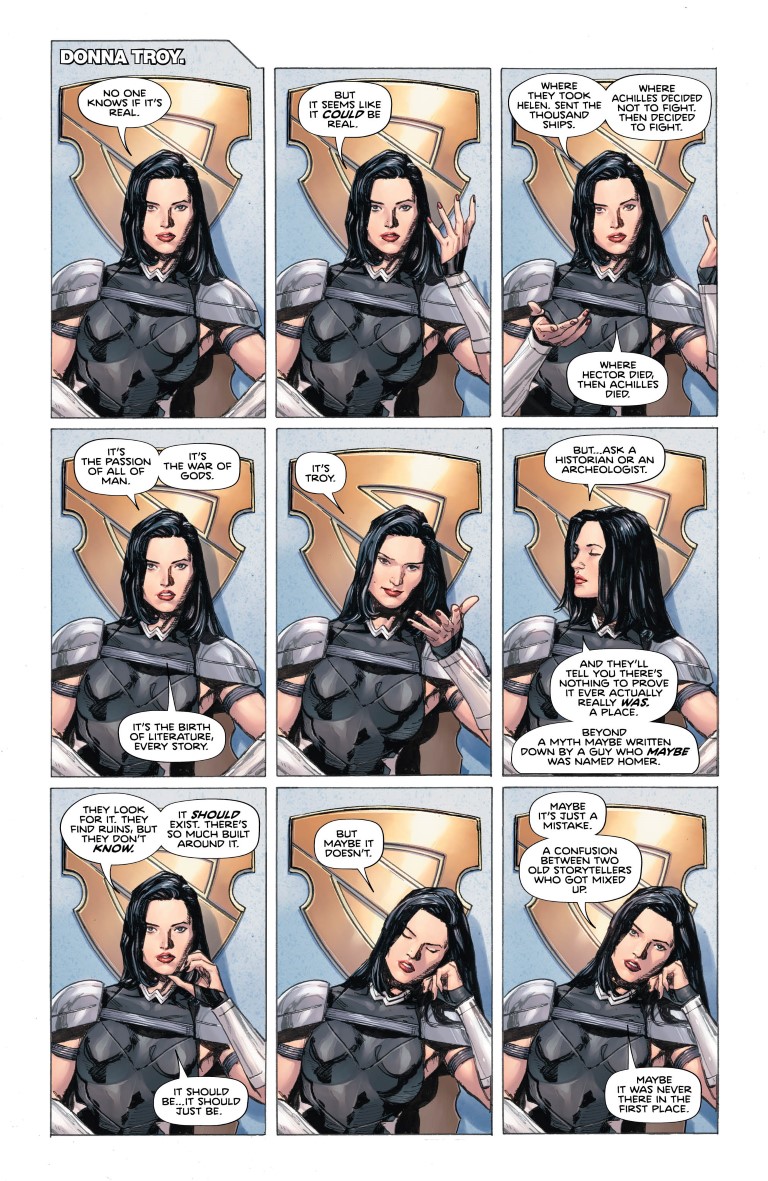 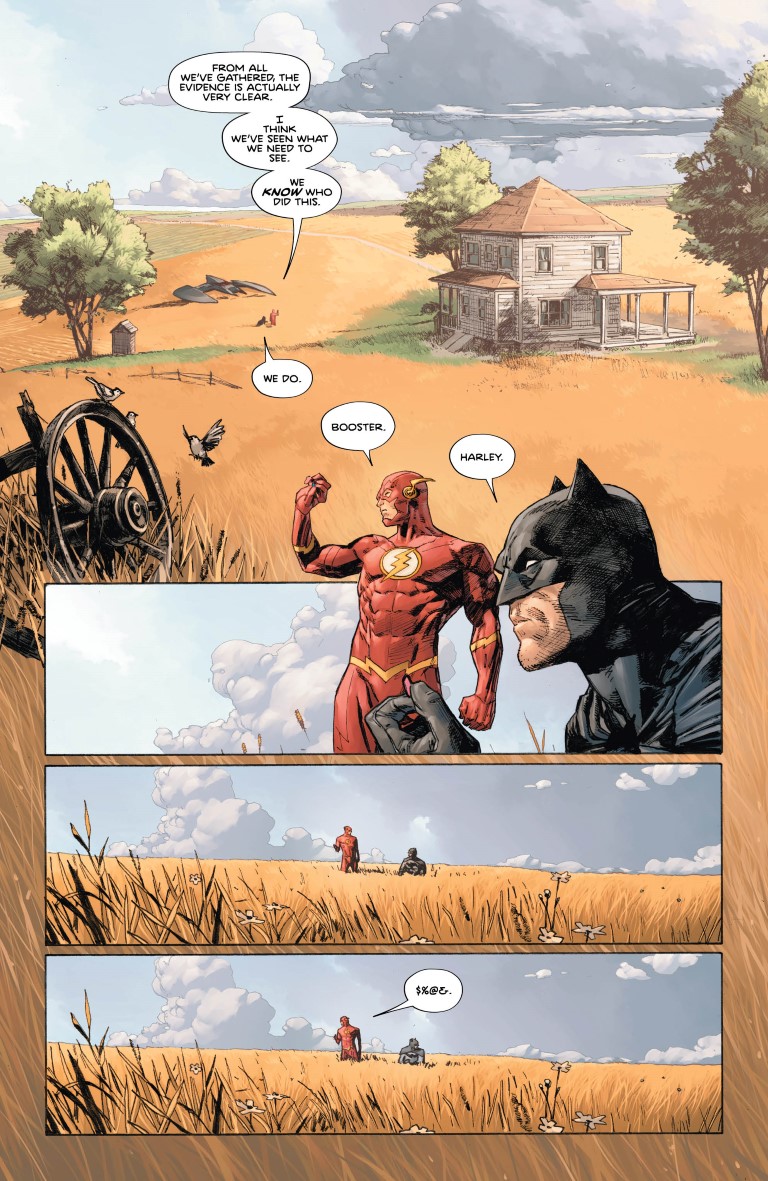 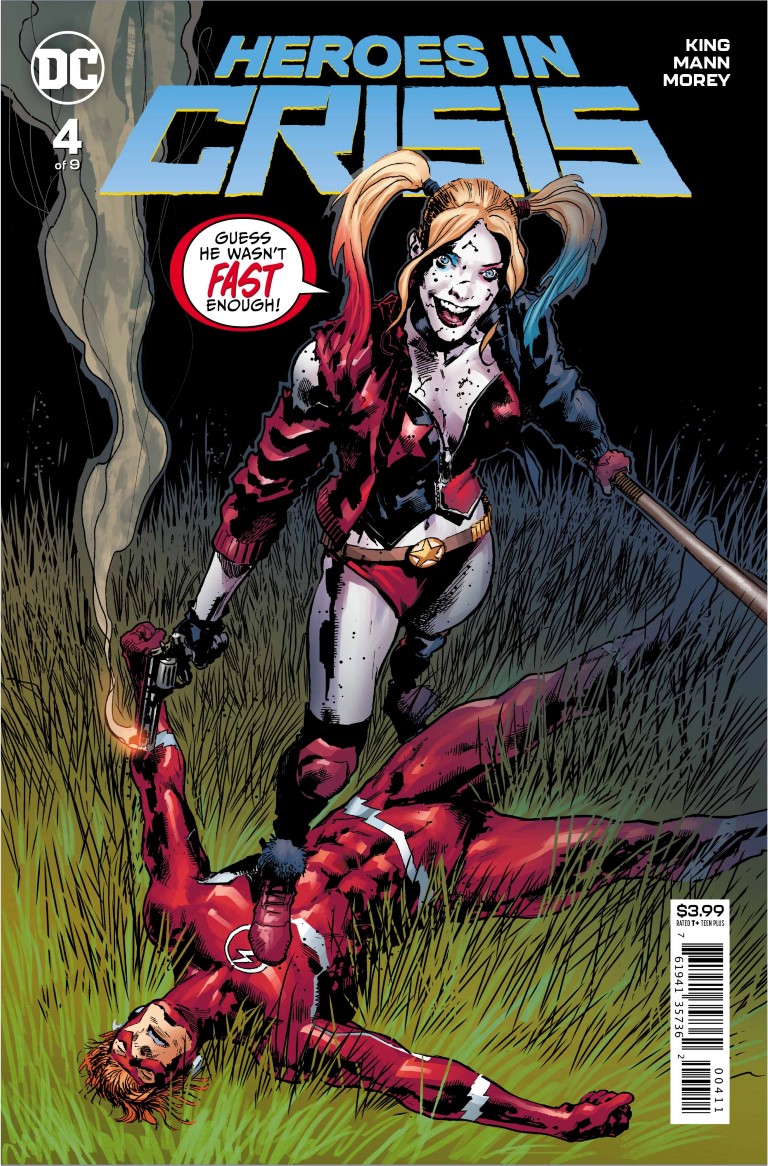 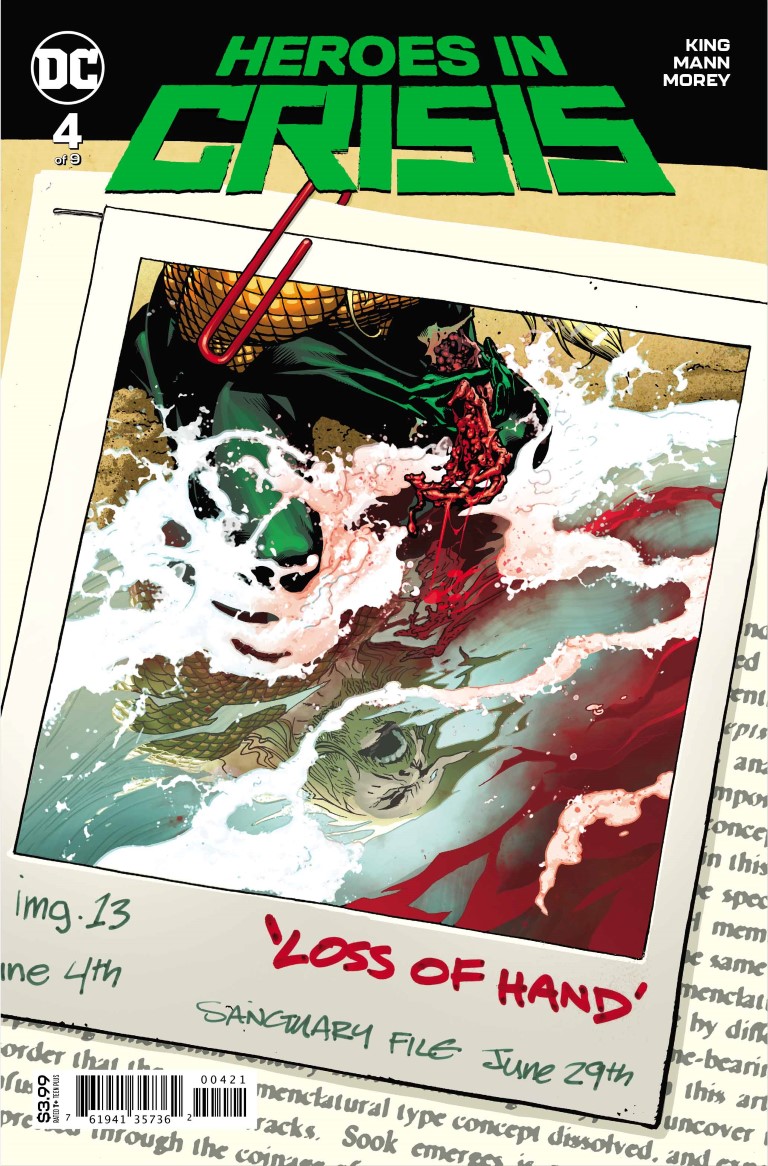