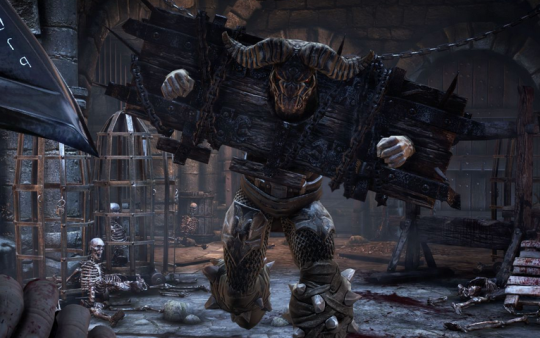 Techland officially announces that its upcoming dark fantasy game will run on a new engine, while the game itself went through an overhaul and is now heading to next-gen consoles alongside the PC release, with Steam Early Access planned for autumn.

Since its reveal last year, Hellraid has expanded and evolved thanks to the developers’ experience and players’ feedback. While the game will remain faithful to its first-person co-op slasher gameplay, Techland has decided to implement new features and technology, and is now ready to announce them and show it all off in a brand new trailer.

Hellraid will offer three different game modes. In the Story Mode, players will explore the world and try to repel forces of Hell. The highly-replayable Mission Mode will put more focus on arcade-style fun of climbing up leaderboards, creating the longest combos and beating high scores, while the completely new Arena Mode will offer survival gameplay with waves of deadly demonic hordes to fend off. All these modes will be available in both single-player and 2-4 players co-op.

Players will be able to create and customize their characters with armor, clothes, and accessories such as amulets. Thanks to a new class-free skill tree, they will develop a demon slayer perfectly suited to their play style by combining various active and passive abilities – divided into intertwined paths of combat, magic and agility.

The game is currently undergoing a transition to the Chrome Engine 6, the latest version of Techland’s proprietary technology, which is also used by the next-gen zombie survival horror, Dying Light. Thanks to this technology, Hellraid will benefit from a new physics-based lighting system, more detailed locations and character models, complex animations, advanced particle effects, and state-of-the-art AI systems.

With new gameplay features and technology, Hellraid moves from past-gen consoles to the next generation with the announcement of PC, Xbox One and PlayStation 4 versions coming in 2015.

Hellraid will also receive a Steam Early Access release in autumn 2014, which will be regularly updated based on players’ feedback until the final version is launched.

For more information visit hellraid.com and like the game at facebook.com/hellraidgame.