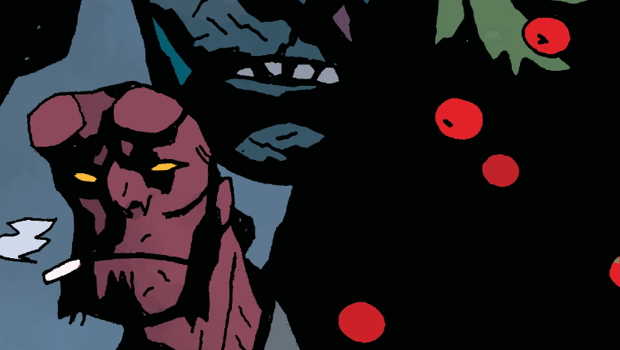 Summary: Three short stories to start your year off in Hellboy fashion.

It’s been a while since I’ve read a Hellboy comic and I’m happy to say this was a nice return to some familiar faces. Three short stories deliver us three different tales of the paranormal.

There’s a lot of writing talent packed in here and each story represents a slightly different voice within the same genre. The first tale is classic Hellboy, someone has had an encounter with an unusual entity and Hellboy listens to his recount before trying to help him resolve the issue. The second sees Sarah Jewell informing residents of a local threat called the Boogam in a murder mystery with a twist.  The third and final story follows the Knights of St. Hagan as they are tasked with an unthinkable quest.

I continue to be impressed with the way stories in the Mignolaverse can have different artists with their own visual style, yet still retain a familiar look to them. This is exactly the case here. The first story has a very etched, quick kinetic feel to it. The second story has a more clean and defined tone. The final story is almost a mix of the first two in art style. There’s a controlled nature to the images but there’s also a vibrant sense to the shading and details.

I often find that with most comics the standard size isn’t enough to convey a story completely enough to feel satisfying, story elements are left unfinished to entice you to read on to the next issue and beyond. In this comic not only do we get three different stories but they all feel complete and not lacking at all. In their much smaller story space each tale manages to convey a much larger world than many comics have to spread over issue after issue after issue. This makes for a great comic for Hellboy fans and comic fans who want to start delving into Hellboy and the wider Mignolaverse.