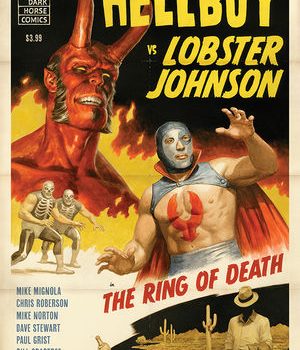 Hellboy vs Lobster Johnson: The Ring of Death Review

Summary: A fun introduction to Hellboy!

The Ring of Death and Down Mexico Way

I chose this Hellboy one-shot not knowing quite what to expect.  Some of the previous Hellboy books I’ve looked at are pretty heavy on the mythos.  This one is not.  This is very much a single stand-alone issue.  It’s also one of the campier and funnier books I’ve read in a while.  The fact that the cover looks like a 70’s B-Movie poster is no coincidence. 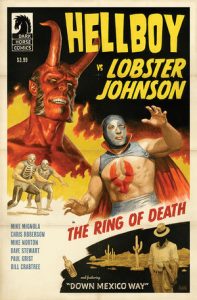 The Ring of Death is done in the style of a 70’s B-Movie.  The movie itself is coloured in black and white, which gives it more of a nostalgic feel.  The art itself is very slick and polished.  It looks great.  The opening scene of Lobster Johnson’s car arriving is incredibly well drawn, and the quality doesn’t taper off.  Lobster Johnson is a cloaked, masked wrestler, and the demon he battles looks suspiciously like Hellboy.  Even the conclusion on top of an Aztec Temple oozes camp.  For starters, it is surrounded by ropes and looks suspiciously like a wrestling ring.  The art in the first story is just plain fun!

Down Mexico Way has a less refined style, but is still fun.  At times it looks more like a coloured Sunday cartoon strip.  It has a basic colour scheme, enhancing simple details.  It doesn’t lack in detail by any means, but between the art style and the colouring this additional story is a simple yet effective one.

The first story, The Ring of Death, begins with Hellboy and Vic sitting on the couch watching late night TV.  The late feature is announced as ‘Lobster Johnson and the Ring of Death’.  Vic is eager to watch, Hellboy, not so much.  The movie begins with Lobster Johnson arriving in a town in need of assistance.  It appears a beautiful young woman has been captured by a demon and his masked men.  The demon looks remarkably like Hellboy, and he needs the girl for a nefarious ritual.  Lobster Johnson defeats his henchmen, but the demon flees with the girl, taking her to an altar on top of a temple in the jungle.  As a nice touch the altar is set within a wrestling ring.

The second story, Down Mexico Way, is set of course in Mexico.  A well-dressed man makes his way into a small Mexican town in the desert.  He’s searching for an individual who has been absent for some time.  We quickly discover that he has come upon a movie set, filming the exact film we witnessed in the first story.  It’s a nice bookend for the first story, and explains Hellboy’s trepidation about watching the film in the first place.

This book is a great one-shot for anyone that has interest in Hellboy.  The book doesn’t take itself very seriously, and is a fun read from cover to cover.  The campy tone it takes meshes perfectly with both the story and the art, and in a book that has a luchador fighting a demon in a late-night movie, it makes it a truly complete book.  The second story is a great addition to the first, and rounds out the narrative nicely.  The differing art styles between the two narratives complement each other nicely.  In all this is a fun book and well worth picking up to read.

A fun introduction to Hellboy! 4 out of 5 stars.

Art and Colours for The Ring of Death: Mike Norton and Dave Stewart

Art and Colours for Down Mexico Way: Paul Grist and Bill Crabtree