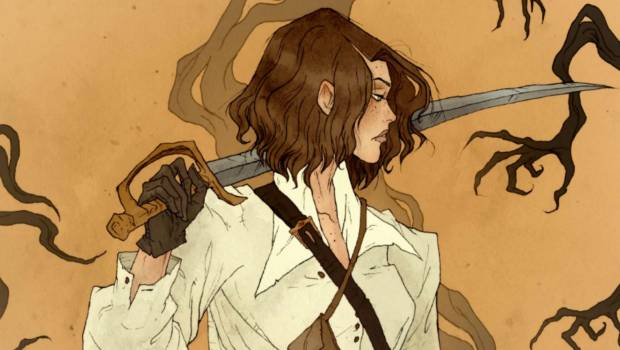 “It starts with a bloody trap and rumors of Baltimore’s ghost,” said acclaimed co-writer and novelist Christopher Golden. “And things only get bloodier and weirder from there.”

Her name was Sofia Valk. Once she lived in an Estonian village, before the evil came. But when Europe erupted with the early battles of World War II, it was time for Sofia Valk to embrace her destiny as Lady Baltimore.

“LADY BALTIMORE is the start of something big and unexpected,” said Golden. “The series springs from the pages of the BALTIMORE comics and novel, but it has a different sensibility and a dynamic new lead protagonist. It’s perfect for new readers, who can start with issue 1 and not miss a beat, while longtime fans will be thrilled to see how the BALTIMORE mythos evolves, as some familiar faces encounter brand new characters and fresh terrors.”

LADY BALTIMORE takes place 13 years after the events of BALTIMORE, THE RED KINGDOM, the final Baltimore series in which the Red King amassed power on his way to the Vatican coronation while his armies swept across Europe in an unholy war.

“I love the story and the hero that is Lady Baltimore. On the surface, she’s this kick-ass heroine who gets the job done, but underneath it all is the turmoil revolving around learning how to carry the weight and legacy of her new title,” said artist Bridgit Connell, who is collaborating with Mignola and Golden for the first time. “And as an artist, it’s a ton of fun for me to help create all these unique covens of evil witches and cool new monsters (like those creeptastic harpies) that’ll be causing serious chaos throughout the series.”

“There are witches and Nazis and vampires, all kinds of crazy monster action—What more can you want from a comic?” asked Mike Mignola. “Oh, and there’s art by Bridgit Connell, who is great. I had the pleasure of going back and forth with her on some of the creature designs and it was a real pleasure. So happy to have her on board for this.”

In time, Sofia Valk became Lord Baltimore’s most trusted ally, but without him she must take on the fight herself. Can she fight monsters without becoming a monster herself?

“LADY BALTIMORE is just the beginning of a large, sweeping story,” said Golden. “We’re weaving a crazy dark tapestry of horrors in this book, telling intimate stories in the midst of broad scope action. We’re all having a blast. It’s the perfect time for readers to discover this universe.”

The first issue of LADY BALTIMORE goes on sale from Dark Horse Comics on June 10, 2020.