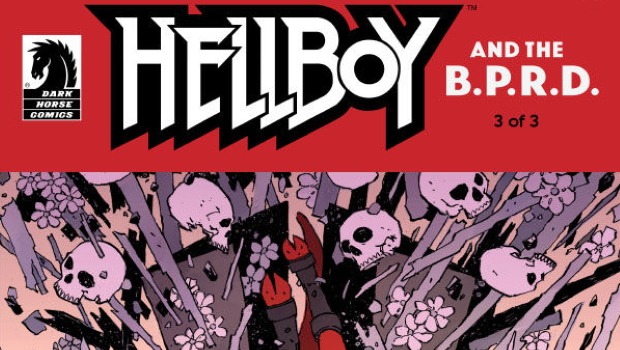 Summary: The big reveal of what the B.P.R.D. were really up against and a tender moment of connection.

I’ve been out of the Mignolaverse for a little while now (not for any particular reason other than letting others get a look and being busy with other things). So it was nice to come back and have the touching ending this story delivers. I won’t spoil it… but it’s well worth the read just for that ending (I think anyway). This story concludes the 3 part mini series and reveals just what the B.P.R.D. had been fighting.

There are some really lovely moments in this story… touching heartfelt moments that are a nice contrast to the horrors that fill the other pages. We open in 110,000 BCE, with an ancient “tribe” looking quite unpleasant and then segue to the present (well present for the story, which is 1975), in New Hampshire with the investigation “wrapping up”… before things get hectic and then are truly concluded. After the last main story arc I was deep in being the “end game” essentially… it was nice to step back a bit and whilst there is indeed a horrific enemy causing trouble… it still feels like there’s a bit of air to breathe. Like the B.P.R.D. have got this under control (mostly). That reduction in tension gives room to explore some more character interactions and that is done with a lovely sense of warmth in this issue.

The two main call outs I want to make for this issue are the colours, specifically some of the tones in use and the expressions on faces. With many comics the main focus of the art is action, action, action. Things have to be constantly in motion, there needs to be a palpable sense of activity in every panel. Here we have the chance to stop for a moment… not to drift off the story but in many ways to heighten the impact of the story… that impact is aided by the expressions on the characters faces. There’s a particular panel in which one of the characters is going about his more or less daily routine… then he comes across a horrific sight… and that one panel… the look on his face, it just says so much that really digs into the emotion of the story. It’s one thing to see gore and fights… but it’s another to see what living in a world with these things in it can mean to a person… what it can do to them emotionally.

Certainly if you’ve been following this story, this is an obvious must buy… but I’d also say if you are a fan of Hellboy and Liz… this is an essential. I don’t want to say any more than that… because it’s really quite lovely and it’s best if you read it yourself with out any spoilers.