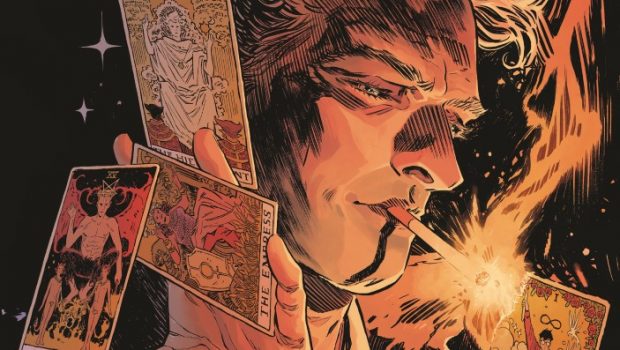 HELLBLAZER ENTERS THE SANDMAN UNIVERSE THIS OCTOBER FROM DC

Last year DC launched the Sandman Universe, a series of books curated by legendary author Neil Gaiman, bringing in new creative voices to expand the mythos of the Dreaming. Today DC announces a new addition to this universe starring the infamous John Constantine. It all begins October 30 with a special one-shot issue, THE SANDMAN UNIVERSE PRESENTS HELLBLAZER #1 from writer Simon Spurrier and artist Marcio Takara, followed by the ongoing series JOHN CONSTANTINE, HELLBLAZER from Spurrier and artist Aaron Campbell this November. 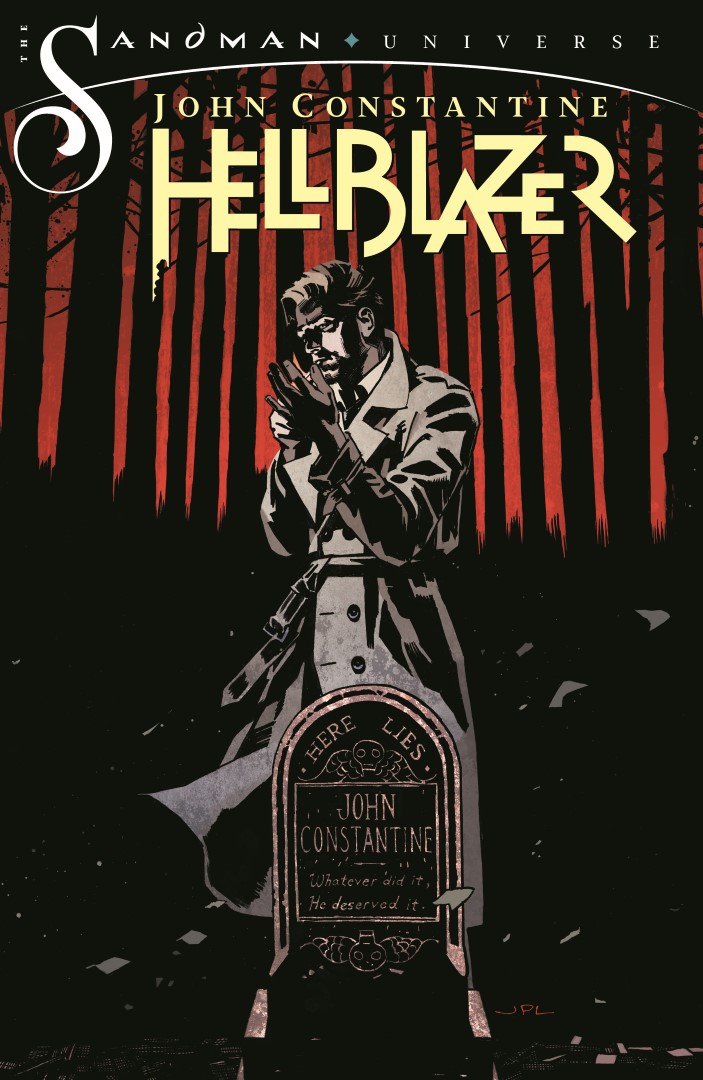 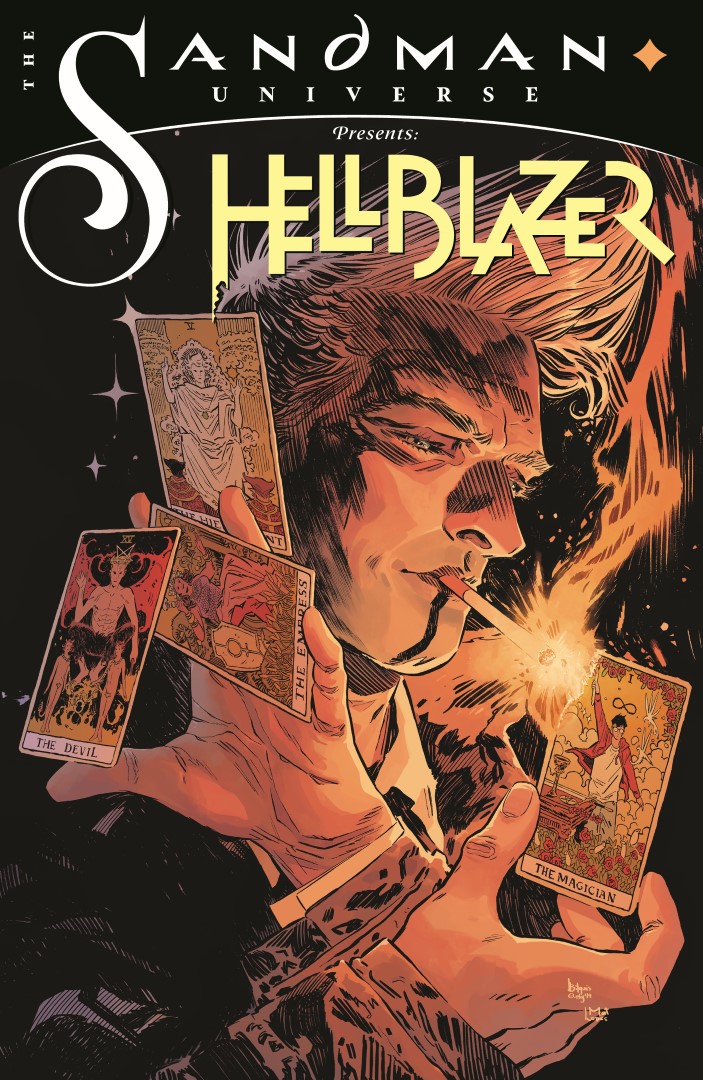 “Year One was just the start. Now you get to inhabit the worlds, books, and houses we built for you,” says Gaiman. “I was thrilled when I was told that John Constantine—the original, demon-haunted one who first showed up in SWAMP THING’s “American Gothic” story—is coming back to his murky and dangerous roots. More magic and more darkness and not a few gods and dreams are here for you to explore.”

In THE SANDMAN UNIVERSE PRESENTS HELLBLAZER #1, the story begins in a moment originally seen in Gaiman’s miniseries THE BOOKS OF MAGIC. John Constantine finds himself haggard, bloody, and dying in an epic magical war—a battle that will soon consume the world. As he lies there, the vision of a young Tim Hunter stands above him, the naive youth seeing firsthand what his destiny holds. Horrified, Hunter flees back into the past, and Constantine is left behind to die.

Now, years later, Constantine reemerges, physically un-aged but with all of his memories intact—and yet the world has passed him by. Constantine must now fathom a new world torn apart by the same old political and social woes, while attempting to discover how he returned after all this time. But most troubling of all are the rumors of a new young magician named Tim Hunter, a boy destined to be either the greatest sorcerer of all, or the greatest threat to the world. If history is repeating itself, then is it John’s role to die all over again? Or is John here to stop the cycle—and stop Tim Hunter?

“HELLBLAZER’s the one title I’ve always aspired to write. Ever since John Constantine slunk from Alan Moore’s brain into SWAMP THING, dropping secrets like grenades, bewildering vegetables, and spinning mysteries, I’ve been drawn to his misadventures with eerie gravity,” says Spurrier. “John Constantine is the cynic’s magician: a man of selfish drives and cataclysmic self-knowledge, who tries to do the right thing in spite of himself, in spite of the cost, in spite of the vile and violent world he occupies. He may not be the hero we need, but he’s definitely the bastard we deserve.

“In this new era, everything is different. Everyone and everything he loved and knew is dead or despises him. Alone, angry, older, and wiser, he beholds a world that is clearly going insane. The shadows are deeper than ever. So he does what he does. He breathes smoke. He grins to himself. And he goes to work.”

Following the special issue, Spurrier and Campbell will continue Constantine’s story in the pages of JOHN CONSTANTINE, HELLBLAZER, available November 27. November will also kick off new arcs in THE DREAMING, BOOKS OF MAGIC, LUCIFER, and HOUSE OF WHISPERS.

In THE DREAMING from Spurrier and Bilquis Evely, the sentient algorithm known as Wan has taken full control of the kingdom of Dream—but who created him? And did they put him on Dream’s throne for a purpose? Abel thinks he may be on the verge of uncovering that secret and hopes to tell Matthew the Raven what he knows, but Wan has a dangerous side…and while the mysterious Dora might be able to help them fight back, she’s quite busy in the waking world learning the truth about her own past—a truth that might unmake her entirely.

In HOUSE OF WHISPERS from Nalo Hopkinson, Dan Watters and Dominike “Domo” Stanton, Erzulie is grieving the loss of one of her husbands, while her remaining spouses ask themselves if they can remain by her side. But in the darkness, a rival has arrived to vie for Erzulie’s place as the newest master of a House in the Dreaming; the Corinthian has his eyes on a forgotten piece of real estate in the Dreaming, and he’s not above moving into a fixer-upper, if taking control of it can give him power like Erzulie’s. To fend off this threat, Erzulie will need allies – including the mysterious Papa Midnite, and the dangerous Shakpana, the contagious god whose last outbreak nearly destroyed the world. And with friends like those…

In LUCIFER from Watters, Max Fiumara, and Sebastian Fiumara, Lucifer is reeling from his standoff against God and the forces of Heaven, and he finds himself wandering the English countryside neglecting his cosmic responsibilities and attempting to build a new life—and home—for himself. Of course, any house built by Lucifer is bound to be a little piece of Hell on Earth…as his first dinner guests, John Constantine included, will learn. But elsewhere, ancient and powerful forces are conspiring against Lucifer. There is a wailing and gnashing of teeth upon the Earth. There is rage and violence in the hearts of men and beasts alike. For every thousand years the Wild Hunt must ride, and tear out the heart of a god…and this time, the black bone horn blows for Lucifer.

And in BOOKS OF MAGIC from Kat Howard and Tom Fowler, Tim Hunter has just made the most fateful (and possibly catastrophic) decision of his young life, but as a result, he’s feeling quite confident about the kind of magician he’s going to become…until John Constantine comes knocking on his door, determined to kill the young man who’s clearly starting down a road that leads to the planet’s destruction. There’s no guarantee Tim’s worst self will ever take over…but can Constantine afford to take that chance? And now that Tim’s secret is starting to get out at school, can he ever expect to return to a normal life again?

The first collected editions of THE DREAMING, HOUSE OF WHISPERS, LUCIFER, and BOOKS OF MAGIC are available in comics shops and bookstores everywhere this month. To find out more about the new series and new storylines in the Sandman Universe, follow dccomics.com.