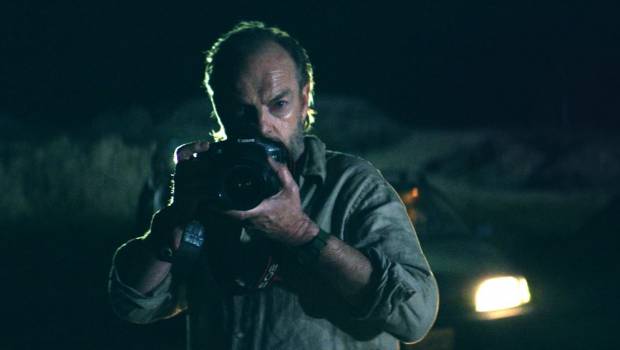 Hearts and Bones’ dull visuals and undernourished script detract from its strong performances and sincere intentions. The film is directed by Ben Lawrence, the son of filmmaker Ray Lawrence (Lantana, 2001). It marks his feature debut following a short film and several documentaries. He photographs this Sydney‑set racial drama using handheld cameras but without a unique filmic imprint. It is curious considering Lawrence, born in England, is himself a photographer. However, scenes of movement feel overly relegated to driving cars at night and the film’s cut retains too many superfluous moments.

The story’s locations include an apartment filled with boxes and an unfurnished home, but they lack distinction. The dull naturalism of the locations is compounded by Lawrence forgoing memorable cinematic images. It makes the film’s intended cinema release seem unnecessary. I saw Hearts on a home screener, which reinforced its ‘television film’ presentation. The clear, unfussed but bland photography fails to sustain the heat of a potentially compelling view of cultural disharmony.

The story, written by Lawrence and Beatrix Christian (Jindabyne, 2006), is about two men from contrasting backgrounds. Dan (Hugo Weaving) is an experienced but bruised Australian photographer. We first see him in 2018, where he is situated in Iraq. He discovers a car with a dead family inside and then attempts to photograph a girl before she runs into a minefield. Dan’s return home to Sydney is eased by the love of his wife, Josie (Doctor Doctor’s Hayley McElhinney), a ballet teacher.

The interview is overheard by Sebastian (debut actor Andrew Luri) who is a South Sudanese refugee and a taxi driver. He asks Dan to photograph his all-male choir, which includes other people of colour and a man from Syria. Dan is reluctant because he only shoots warzones but is persuaded after hearing the group’s excellent voices. His friendship with Sebastian is hindered by a troubling plea. Sebastian urges him not to showcase the Sudanese photos, including a crucial image of a man held at gunpoint. It is because Sebastian has kept his own grievances secret from his wife, Anishka (Bolude Watson).

Hearts’ screenplay is hindered by story contrivances that dilute its dramatic conviction. The premise hinges precariously on the coincidence that Dan and Sebastian narrowly missed each other during a critical moment fifteen years ago, but now collide while both living in Sydney. The contrivance would be forgivable if Sebastian’s motives shifted convincingly. His dogged pursuit of Dan’s talents contradicts his demands for secrecy. His revelation is also too predictable, and it is impossible to believe that an experienced photographer would only take one picture of a terrible incident. Dan is a professional who would capture hundreds of photos and study stories and faces for hours. 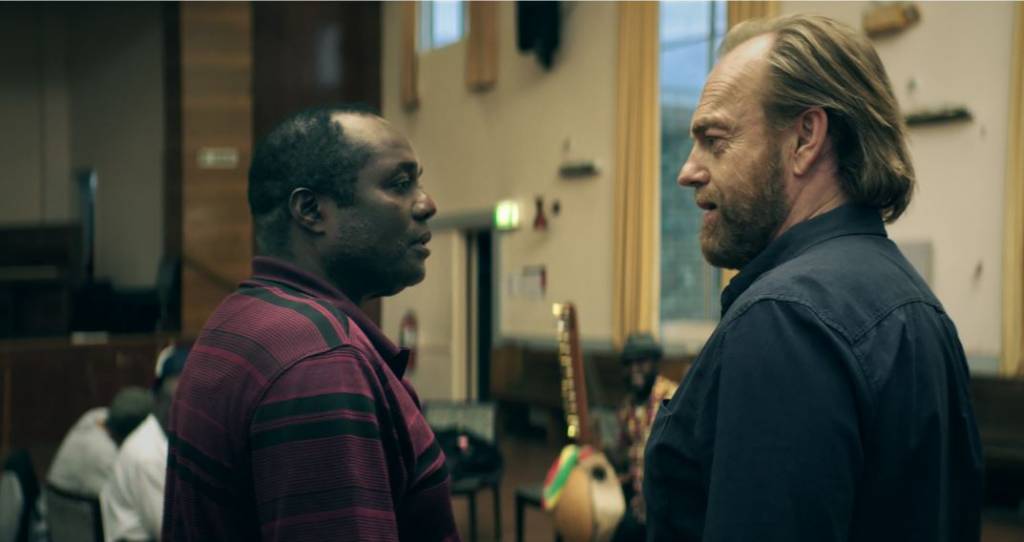 While inconceivable that Dan would not probe the key photo sooner, the plot holes typify Hearts’ clumsiness. A notable misstep is the pointless Iraq prologue. It is detached from the plot and could have been set in Sudan. It also unintentionally paints Dan as either daft or cold. With laughable indifference, he ignores the bodies of the two dead adults and instead photographs the girl before she sprints away. This pointless detour could have been replaced with flashbacks visualising suppressed memories of Sudan and revealed Sebastian’s interesting but elusive backstory with flair.

Hearts is a jumble of story ideas and characterisations requiring sharper editing. Grief is the film’s best theme. Dan embodies male concealment because he predictably withholds his experiences with death. His stern growl and grizzled exterior mirror a damaged war veteran whose eyes are stained by bloodshed. He hides beneath a smile and when asked what his trip was like he replies, ‘good’. Yet the way the film shrouds Dan’s desires is counterintuitive to how effectively Weaving’s dishevelled physicality dramatises male concealment. Why photography is important to him is adrift aside from telling an interviewer, ‘I photograph what my conscience asks me to’. The line signposts his dilemma about displaying the photos because he wants people to be viewed as more than collateral damage.

The story’s emotional void is apparent in the distance found between Sebastian’s past and Dan’s psychology. By making Dan more affected by Iraq than Sudan, the plot threads are isolated. The emphasis rests on a ‘will he or won’t he?’ question regarding the photos rather than suggesting his trauma stems from Sudan. Additionally, Dan’s male hysteria is comically gruff. In one scene, he demands to know why Josie kept her pregnancy from him (he was overseas) and as he storms off to his car he screams, ‘I’m goin’ to Syria!’ Hugo Weaving is now sixty and it would have been interesting exploring Dan’s role as an ageing parent instead of relying on being a kitchen sink melodrama. 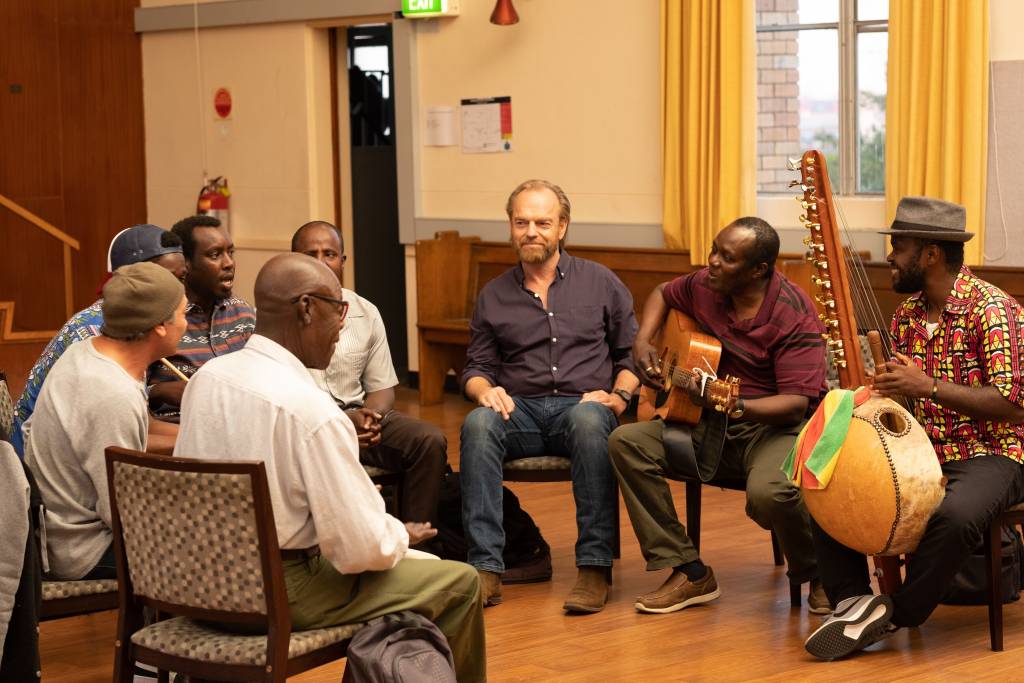 Lawrence’s screenplay struggles to deliver satisfying dramatic payoffs. Dan’s brisk transformation from a curmudgeon to someone moved by the choir proves fatal. It robs Hearts of an ongoing dramatic question about whether he will aid Sebastian. A deeper backstory could have illuminated Sebastian’s overseas activity and its effect on Dan. Various subplots are also tabled, such as the pregnancy, an unrenovated house, and the possible re-emergence of Sebastian’s daughter. They are discarded in favour of a soft, wish-fulfillment ending. It dilutes any chance Hearts had of becoming a rich character study.

Too many characters make bizarre statements without contextualising their dialogue. When Dan tells Josie about Sebastian, she asks hastily if he will report him. The line is meaningless without characterising her viewpoint as racist, intolerant, or lacking empathy. Similarly, the tension between Sebastian and Anishka changes radically from scene to scene. Anishka’s anger suddenly shifts the moment she tells Josie that she does not understand their experiences. The women’s fallout is also abruptly resolved. Evidently, these half-drawn subplots and characterisations needed refinement.

The film is salvaged by the raw emotions of the male performances. Hugo Weaving, one of Australia’s best dramatic actors, overcomes the clunky material with a brutal physical display. He illustrates Dan’s wounded demeanour through highly emotive scenes that require him to crumple down in tears. It efficiently dramatises the difficulty of depression. A person’s body illustrates their emotions better than words that are impossible to find. His best touch is a subtle piece of acting where he listens to Sebastian’s story. Without dialogue, his eyes suggest how moved he is by the account.

Andrew Luri is also excellent in exploring the different facets of Sebastian’s personality. He is a seemingly good-hearted man who is affable and buoyed by his new life, his love for Anishka, and his choir group. Yet there are moments of emotion where he is as visibly bruised by the past as Dan. It understandably provokes flashes of an angry, confrontational man who grows unpredictable. All the characters are unified by grief, but the women’s roles are not as strongly written. Their parts of the story feel passive and their dialogue is lumpy and inconsistent.

Hearts and Bones is well-timed considering the appalling racism the Sudanese community recently experienced in Melbourne. The film’s thesis, born from this racial conflict, argues that people should not be judged on their past because it prevents them from adapting to a new life. Unfortunately, the execution of a genuinely interesting dilemma results in unfinished subplots and characters.