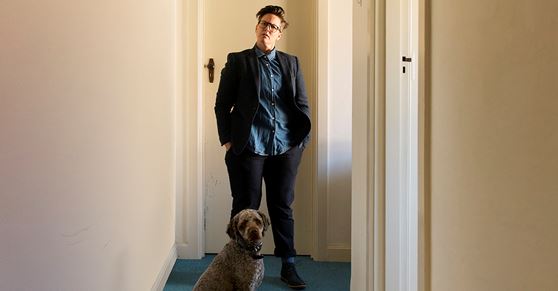 Hannah Gadsby’s tenth solo show was Nanette. It did alright.

Nanette played around Australia and the UK for eighteen months – taking out the top prizes at the Melbourne and Edinburgh festivals before sitting down in New York and dropping a Netflix special last June that started a global conversation that continues six months later.

While Nanette was a random barista, Douglas is a very specific dog, and the only thing they have in common is they’ve inspired Hannah to put pen to paper and turn out a show you couldn’t possibly expect.

Hannah found her voice with Nanette and with Douglas she plans to use it. The stand-up stage has been Hannah’s home for more than a decade, and the last couple of years have given her a few very new ideas to think and talk about in her first ever US tour.

Douglas will premiere in Melbourne before embarking on the US tour, kicking off in San Francisco and then heading around the nation on April 30. There will be more Australian dates to be announced, as well as dates in the US, Europe, Canada and New Zealand. You can sign up at hannahgadsby.com.au to find out if Hannah will be coming by your way any time soon.