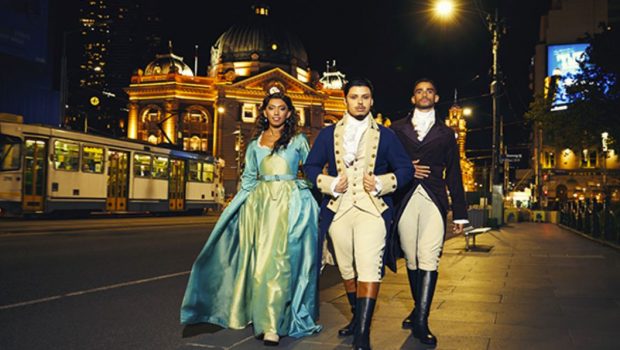 HAMILTON Melbourne: The Revolution is Here!

Celebrating their first performance in Her Majesty’s Theatre, the Australian company have been invigorated by the enthusiasm of Melburnians, who have been awaiting performances since the season was announced in May 2021.

Jason Arrow, who was living in Melbourne when he learned he had been cast as Alexander Hamilton, is thrilled to be back in the city.

“The atmosphere last night was just incredible – thank you Melbourne for embracing us so wholeheartedly! We can already tell how spectacular this season is going to be, in such a beautiful theatre with awesome audiences, the energy is electric. It’s going to be fun!”

“It’s such an exciting time to be starting a new chapter of the Hamilton story in Melbourne, sharing this phenomenal show with a new city. The reaction from the people of Melbourne has been overwhelming, there’s so much excitement and anticipation in the air, so it’s amazing to be up and running with performances!”

Tickets for the Melbourne season are on-sale via Ticketek, currently booking through to 31 July 2022.

HAMILTON premiered on Broadway in August 2015 to wide critical and audience acclaim. The show has won Tony®, Grammy®, and Olivier Awards, the Pulitzer Prize for Drama, and an unprecedented special citation from the Kennedy Center Honors.