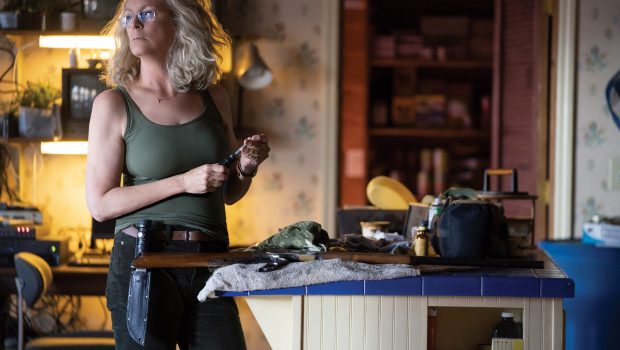 If you were to ask people what the best example of a perfect slasher film is, many will say John Carpenters’ 1978 horror film, Halloween. Brilliant in its simplicity and incredibly influential, the film has inspired many imitations over its forty-year run.

However, the continuation of the franchise has seen diminishing returns, to the point where Halloween has become a bit of a joke i.e. seeing Busta Rhymes throw a spin-kick to Michael Myers’ head. After six sequels, one deviation and one remake (with its own sequel), we now have a reiteration that undertakes the retroactive continuity route as a sequel to the 1978 original and ignores all the other films in the process.

With an acclaimed director, most of the major players from the original film (barring producer/co-writer Debra Hill, who sadly passed away over a decade ago), and an established cast of veterans and rising talent, will the 2018 film wash out the sour aftertaste of the prior films, appeal to fans of the original and succeed as an efficient slasher in its own right?

Set forty years after the events of the original film, Laurie Strode (Jamie Lee Curtis) lives a life of self-imposed solitude, suffers from PTSD and is preparing for the inevitable return of Michael Myers (Nick Castle and James Jude Courtney) aka The Boogeyman aka The Shape to Haddonfield, Illinois.

He is currently locked up in an institution, overseen by Doctor Sartain (Haluk Bilginer), who has taken over the supervision duties of Doctor Loomis. After Michael manages to escape a bus transfer gone horribly wrong, Laurie must protect her family, including her estranged daughter Karen (Judy Greer) and her sheltered granddaughter, Allyson (Andi Matichak), from his impending wrath.

This sequel will appeal to fans of the original and attain newcomers to the franchise. It hearkens back to what made the original film great, while adding some welcome levity, self-aware mirth, stronger-than-usual characterisations for the slasher genre, and ensuring that the major players give their full commitment to the film. 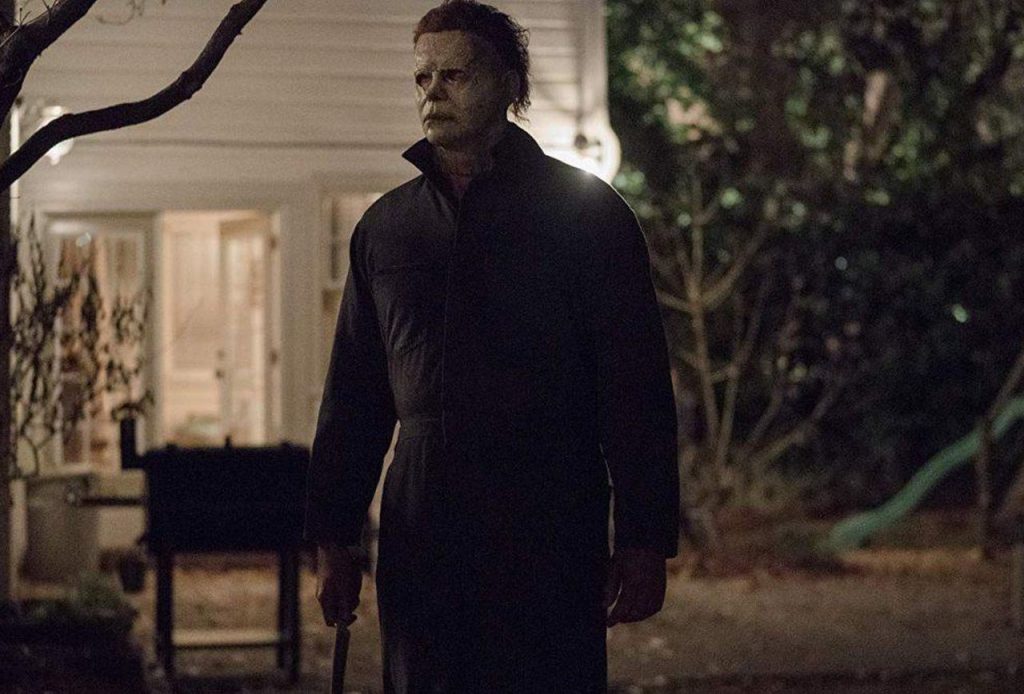 What makes Halloween more compelling than the sequels is that it deals with the effects that Michael has had on the people of Haddonfield over time, which includes trauma, obsession, denial, seclusion and even apathy. These themes are examined efficiently and add punch to the characterisations, which are essential for the audience to care about the players and for the scares and tension to be amplified.

For example, there is an interesting outlook on the way Michael has affected all the Strode women since the events of 1978. In the present day, Laurie is figuratively drowning in her own fear and fighting for air, while her daughter Karen is in a state of denial due to her childhood experiences with her mother. Similarly, Allyson is living in a sheltered existence provided by Karen. In an amusingly meta-fictional way, this recalls Laurie’s life before the traumatic 1978 event. When Michael encounters all three, they react in interesting ways that are more intriguing than the normal cannon fodder in slasher films.

Director David Gordon Green has always made films that look immaculate, from his indie films, including George Washington (2000) and Joe (2013), to his studio comedies, such as Pineapple Express (2008) and Your Highness (2011). Halloween is no exception. 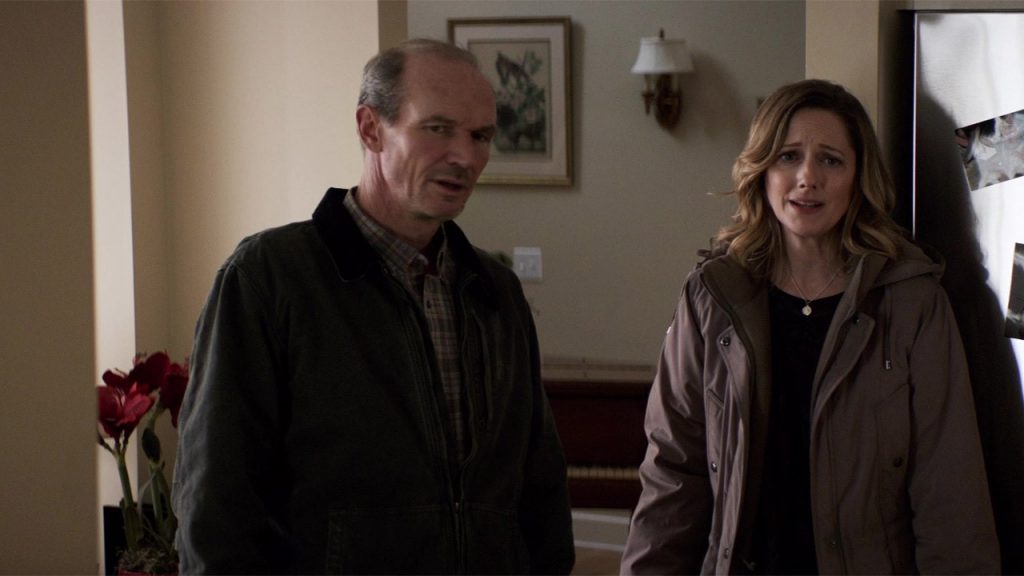 As for the slasher parts here, Green manages to keep the simplicity of the kills and the tension of the first film intact (the long takes, obscuring some of the violence off-screen) while amplifying the gore so that it adds heft to the proceedings without calling attention to itself.

He also provides visually stimulating compositions and beautiful camerawork (thanks to cinematographer Michael Simmonds) that contribute a haunting vibe to the proceedings, particularly during the investigation of the bus crash. The contributions of the stirring score by John Carpenter, his son Cody Carpenter and his godson Daniel Davies, is both nostalgically rousing and eerie.

Another attraction is the affectionate metatextual vibe that applies to past horror films. Whether it is the small Easter Eggs, such as a car radio that plays a song that Laurie sang in the first film, the same use of musical cues and visual cues (the font in the opening credits and the deflated pumpkin), the dialogue (Laurie refers to Doctor Sartain as the new Loomis), character decisions (the link between Doctor Sartain and Michael shares links to present-day fandom) and even the performances (Haluk Bilginer gives an entertainingly over-the-top performance that recalls renowned actor Oliver Reed from the David Cronenberg film The Brood), they all add to the film’s fun factor. It helps that this reviewer could not resist a hilarious comedic aside involving two cops talking about banh mi (basically a Vietnamese baguette).

All the actors give good performances regardless of the varying size of their roles. Virginia Gardner is extremely likable as Vicky, as is Jibrail Nantambu as Julian, who gets lots of laughs for his incisive observations. Ditto goes to Toby Huss, who also provides some mirth as well (or it could be that he reminds this reviewer of a certain character from the TV show, Seinfeld). But the biggest contributors are the Strode women themselves.

Andi Matichak conveys wholesomeness and down-to-earth likeability as Allyson, whilst being very game in the film’s horror hijinks. Judy Greer does very well with her performance. She has a complicated yet too conveniently fleshed out arc and backstory that she needs to convey as baggage; she pulls it off convincingly. And of course, there’s Jamie Lee Curtis, who is fantastic as Laurie. She slips back into her role like a glove. Sharp as a whip, she capably handles the physical parts of her role. She also proficiently explores the meta humour with incisive comedic chops and succeeds in dramatically showing Laurie’s forty-year turmoil, especially during a scene involving a family reunion of sorts.

Some of the more integral characterisations, particularly in the case of Karen Strode, feel shortchanged due to the execution. Her backstory is told in flashback and narration, which undercuts her dramatic arc. The dialogue is also problematic due to jerky exposition and the actors saying how they feel, rather than acting out their emotions, which again affects Greer’s character. There is also the injection of humour, which sometimes undercuts the tension, but is mostly fitting. Finally, some story ideas are left unexplored due to the tight running time of 106 minutes, which may irk those looking for something truly different. 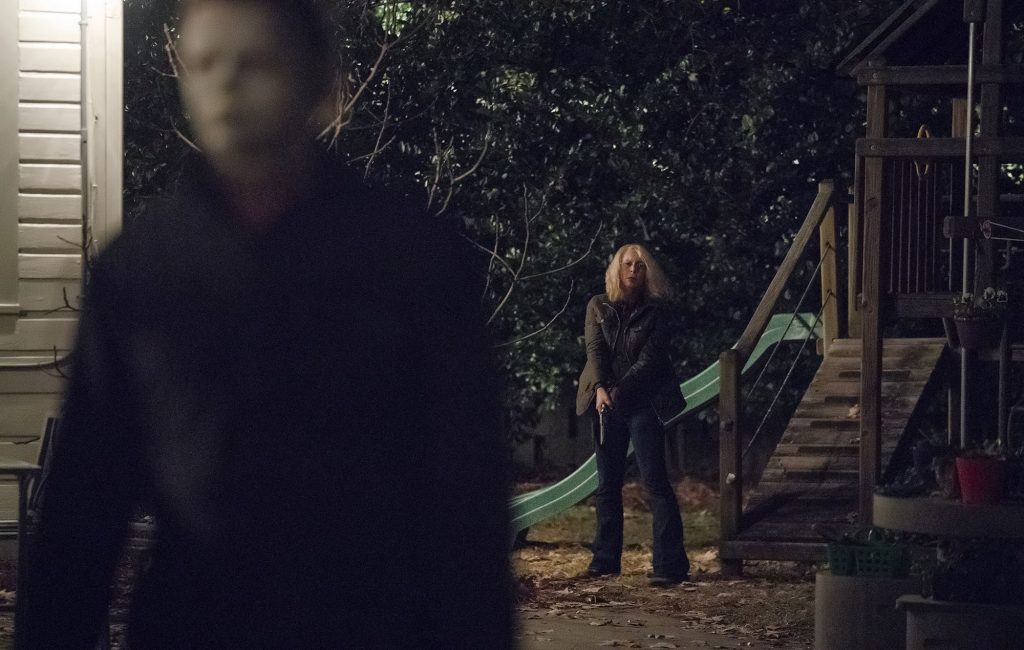 Overall, Halloween is a very entertaining, above-average slasher. It is also a love letter to the franchise and the horror genre itself. It succeeds due to some great performances, assured direction, welcome metatextual humour and genre observations, stronger-than-usual characterisations and genuine scares. Happy Halloween, everyone!

FOUR PUMPKINS OUT OF FIVE

Summary: Overall, Halloween is a very entertaining, above-average slasher. It is also a love letter to the franchise and the horror genre itself.