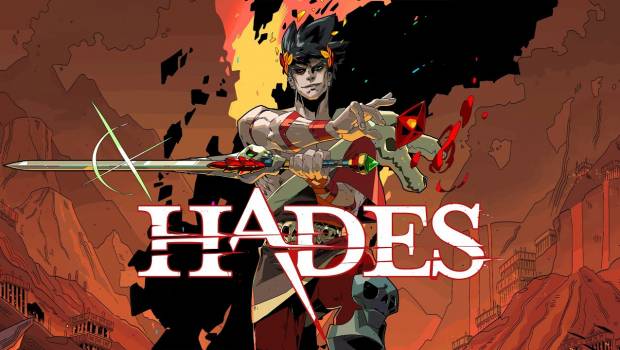 Summary: Hades expertly combines an enthralling narrative with fantastic gameplay to raise the bar for the Rogue-lite genre.

If you’ve been following indie developer Supergiant Games’ development history, you’ll see different elements from each of their previous games within Hades. Bastion showed us that Supergiant know how to create beautiful worlds. Transistor demonstrated their ability to create fascinatingly complex combat systems, and Pyre showed us that they certainly know how to combine story and gameplay like nobody’s business. All these aspects have been refined and brought together to produce Hades, one of the best games released this year and easily one of the most impressive rogue-lites I’ve ever played. 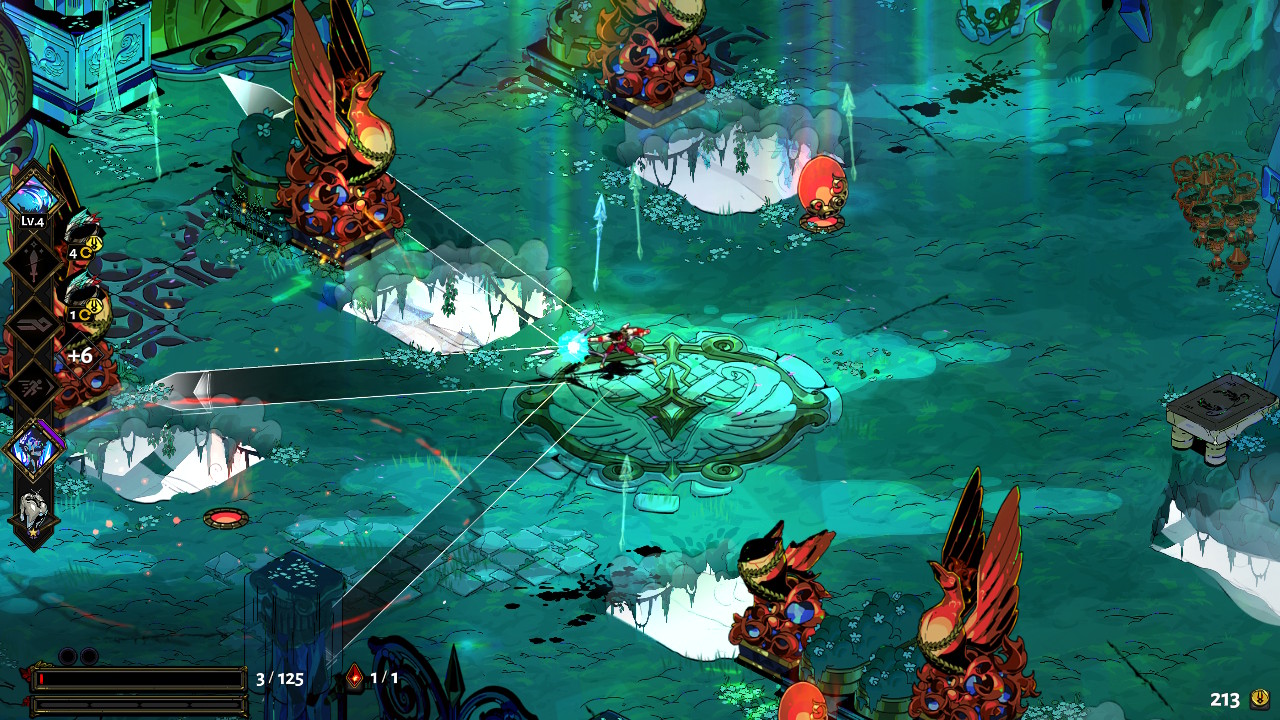 Hades is an isometric ‘Rogue-lite’ action game with a strong narrative element layered on top. You take on the role of Zagreus, the son of Hades, who is on a quest to escape the underworld and join the gods in Olympus, against his father’s wishes. Hades has instructed his minions of hell to stop Zagreus at all costs, however the gods of Olympus are trying to help Zagreus escape the underworld by offering their powers to him whenever they can. Unfortunately, escaping hell isn’t so easy – even for the son of Hades. If the minions of hell overpower Zagreus, he gets sent right back to his father’s doorstep only to be summarily chastised by Hades for his futile escape attempt, then promptly running off to try again. 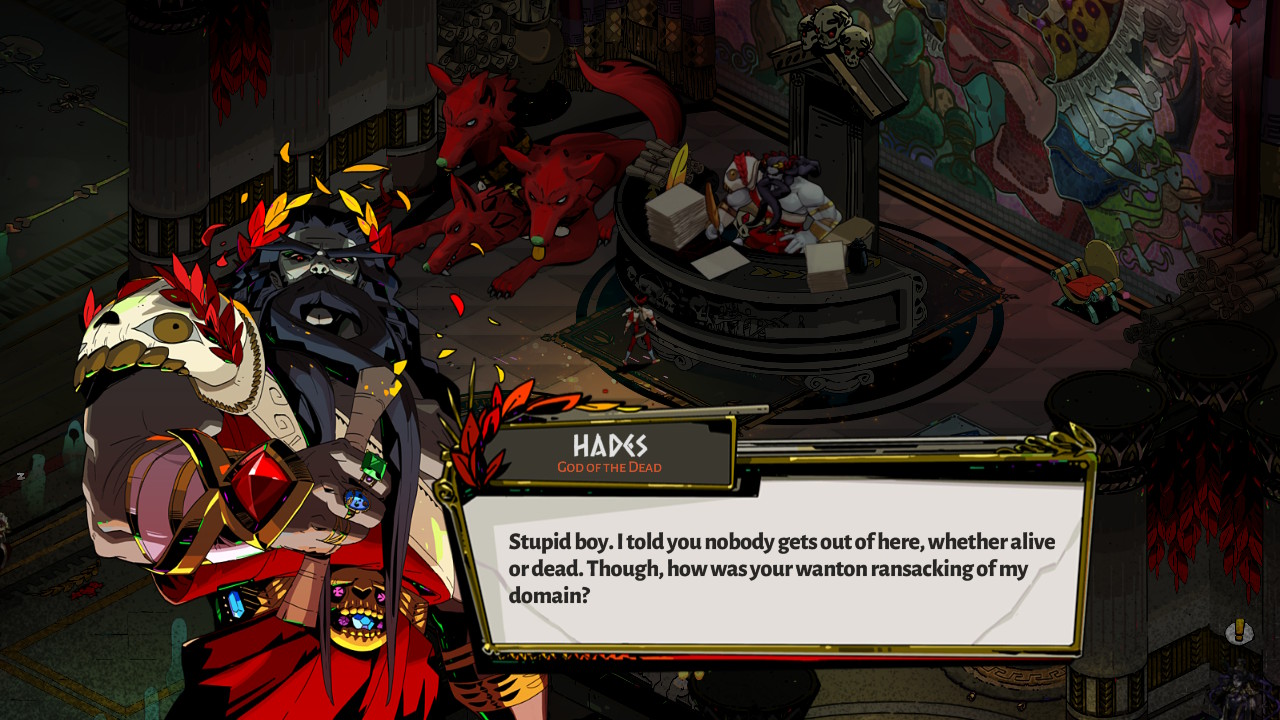 The narrative in Hades plays out like a complex family drama with a huge cast of characters from the pantheon of Greek gods, each with their own backstory, personality and motivations that tie into Zagreus’ epic adventure. The characters are all fully voiced and written with a tremendous sense of personality that makes each of them feel interesting and unique, which makes you excited to see exactly what they have to say whenever you get the opportunity to speak with them. There’s also an astounding amount of dialogue written for every character, which works superbly to prevent the repetitious nature of the rogue-lite gameplay ever feeling stale. 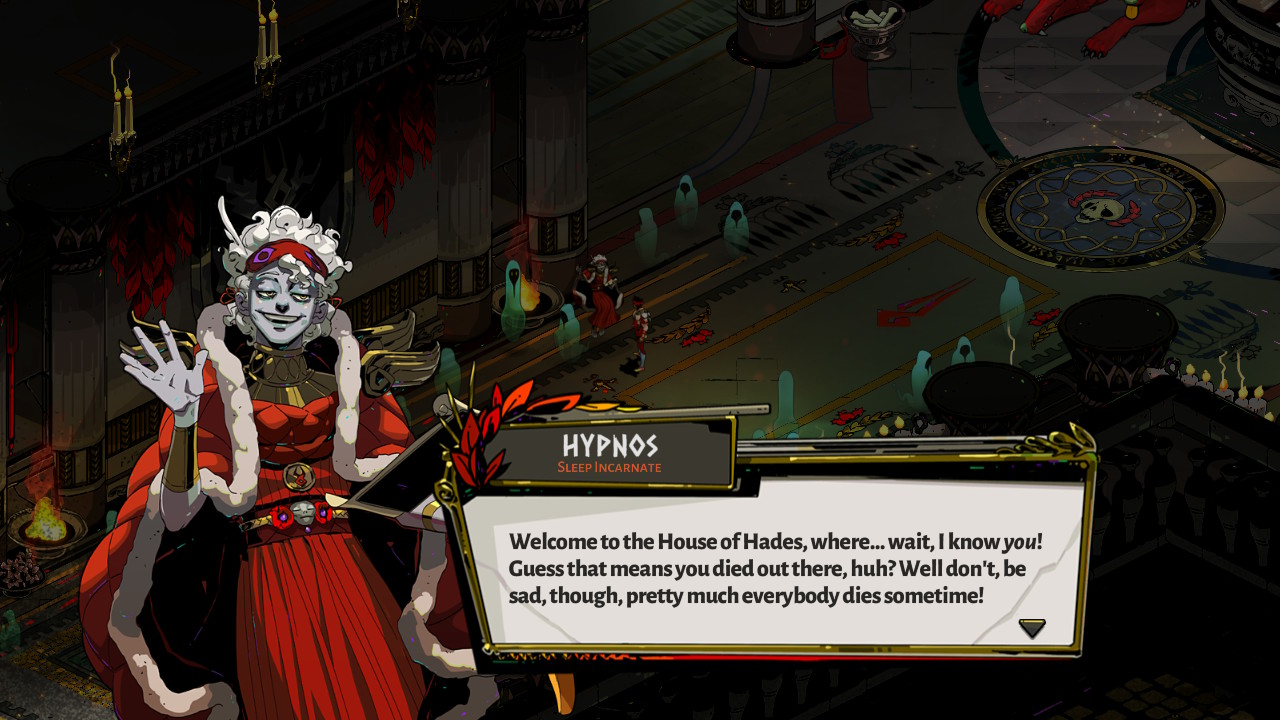 On the subject of gameplay, Hades is a Rogue-lite, meaning it’s designed to be played repeatedly with each iteration being different from the previous and your character becoming slightly more powerful as you collect resources to unlock abilities to use on future runs. Each plane of the underworld is split into chambers, which are procedurally generated combat arenas filled with enemies, traps and environmental features that must be overcome in order to unlock the next chamber. Defeating all the enemies in a chamber unlocks a reward, either an ability to make you more powerful on this current run, or a currency that can be collected and used to unlock perks back in your home base to make you more powerful on future runs. 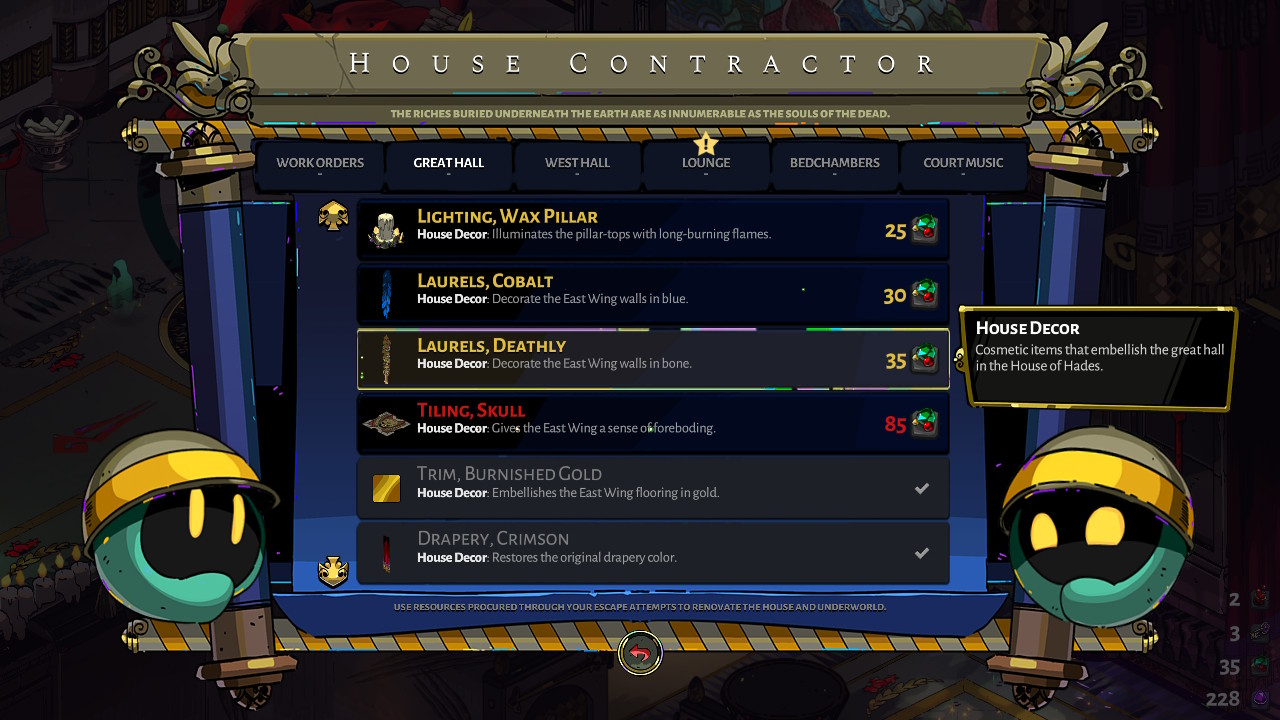 If the idea of playing the same thing multiple times sounds dull to you, Hades uses a variety of ingenious techniques to ensure that each new run feels exciting to start and a unique experience to play through. The first method was touched on earlier, with the delivery of the fantastic story and further development of the various characters revealed with each successive escape attempt. The second method is to ensure that there are plenty of perks and abilities to unlock with the various currencies and resources you collect on your runs. These range from passively increasing attack damage through to acquiring additional abilities. 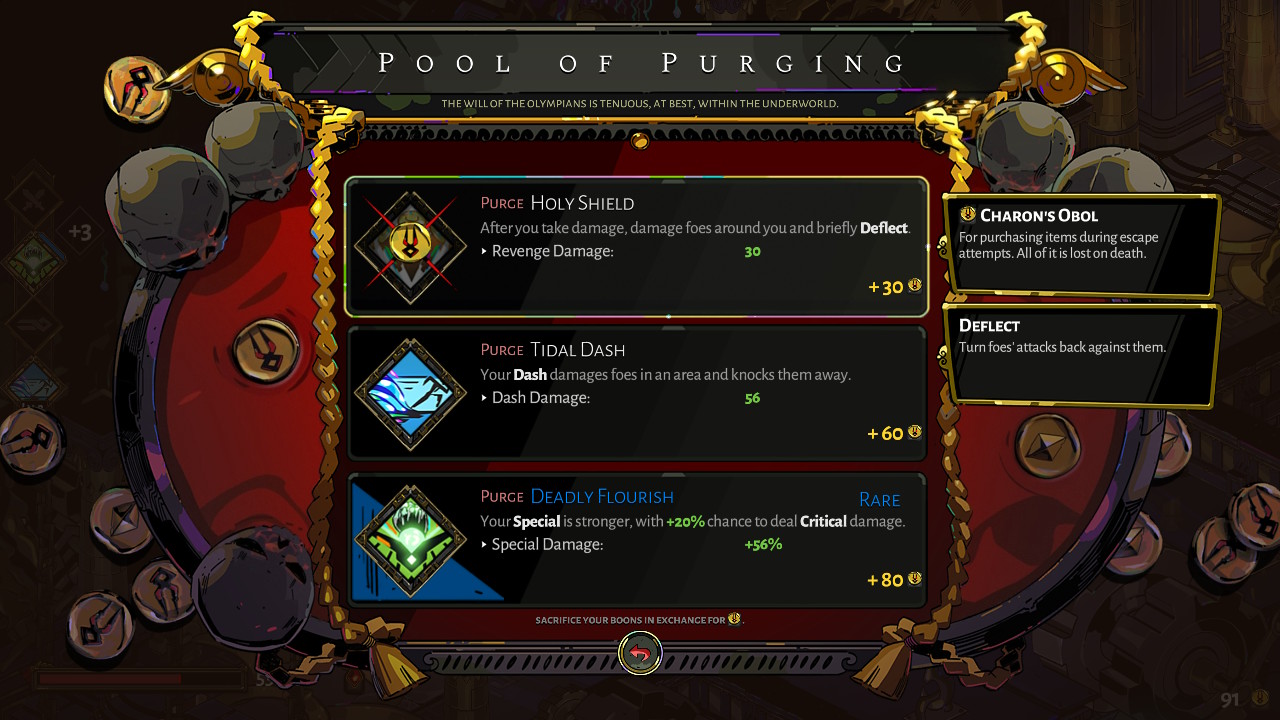 The third technique Hades uses to ensure the gameplay constantly feels fresh and exciting is in the huge array of abilities and upgrades that you can acquire on a run to build a uniquely powerful character loadout. Before beginning an escape attempt, you have a choice from a variety of weapons to take with you on your run, more of which can be unlocked as you collect keys from completing chambers. These weapons range from a sword, bow and spear, through to a Captain-America-style shield and brawling gauntlets. Each of these weapons feel completely different and require unique combat strategies to be used effectively. 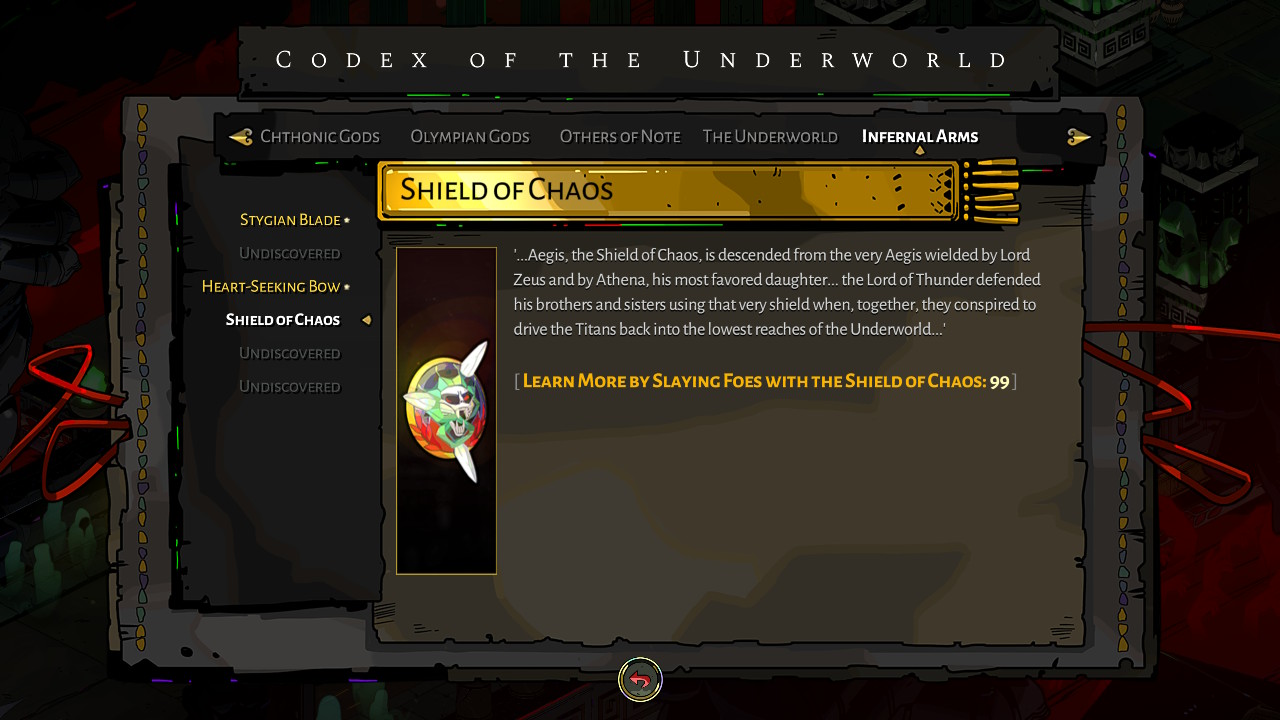 On top of this weapon variety, certain chamber rewards will grant you a choice of powers from the gods of Olympus that increase your damage and provide additional bonuses to your weapons or skills. For example, Zeus offers the power of lightning, which can be used to call a thunder strike down every time you dash away, or cast a zap of lightning to strike nearby enemies whenever you use your standard weapon attack. Aphrodite can empower your skills with a debuff that reduces enemy damage whenever they are struck. There’s a huge range of powers to draw upon through random chamber rewards and an even greater number of ways these powers can be equipped, resulting in a completely unique way to play the game every time you start a new run. 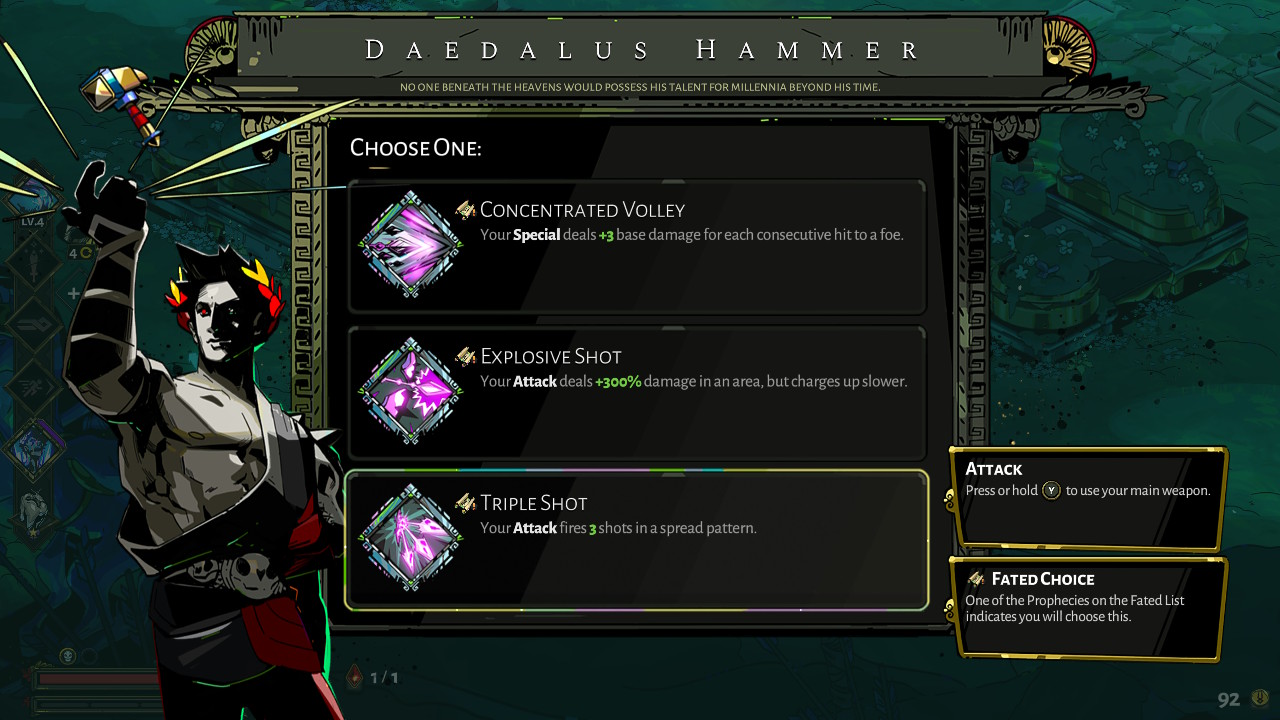 The cherry ontop of Hades’ incredible narrative and gameplay is the game’s phenomenal music and visuals. The screenshots throughout this article demonstrate the gorgeous use of colour and incredible visual designs used for the characters, environments, enemies and combat animations. The game looks absolutely spectacular and runs almost flawlessly at a solid 60fps on the Switch (with some very rare instances of slowdown when there are a tonne of enemies on screen). 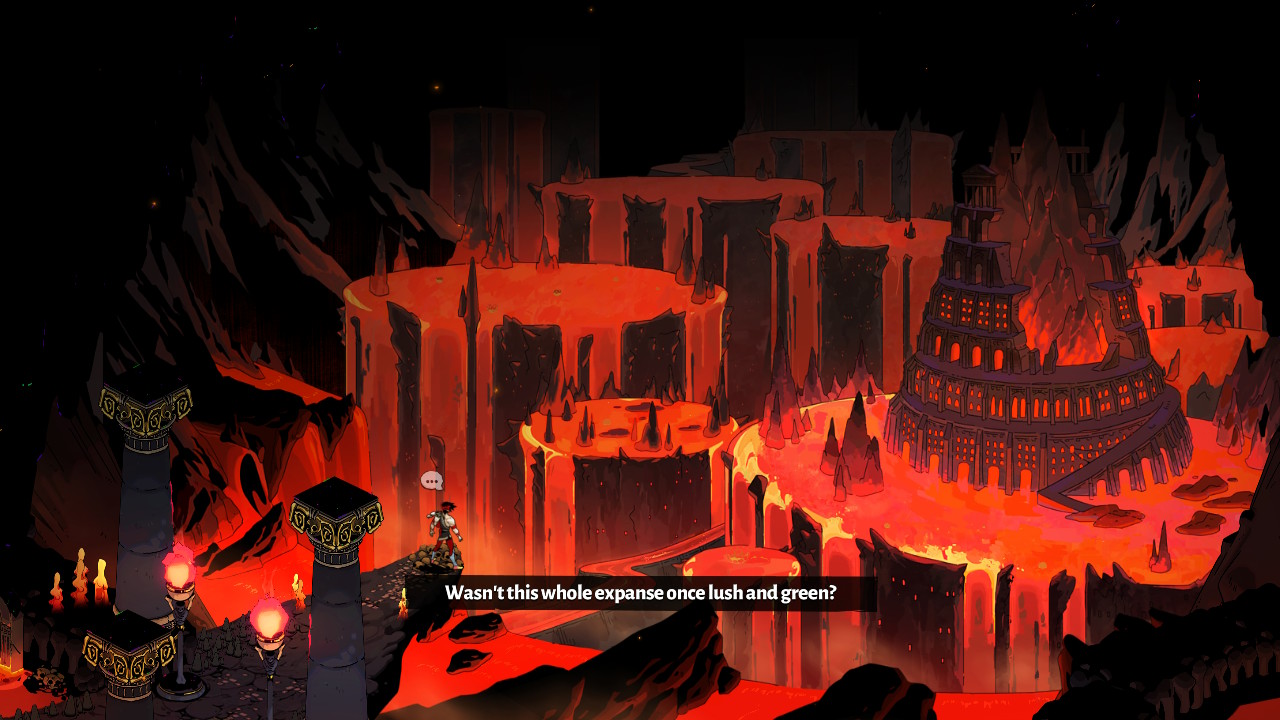 Accompanying these gorgeous visuals is Hades’ killer soundtrack (pun intended). The music perfectly sets the mood and tone of the gameplay depending on whether you’re in a combat encounter, a moment of respite or simply milling about the house of Hades, talking to its various inhabitants. If you listen to the OST, you’ll notice that the tracks are also ingeniously structured to build intensity over the course of the song. This gradual rise in musical energy matches up with the amount of time you spend in each layer of the underworld – the longer you survive, the more intense the challenge you’ll face, and this energetic soundtrack absolutely pumps you up to achieve maximum demon butt-kicking potential. 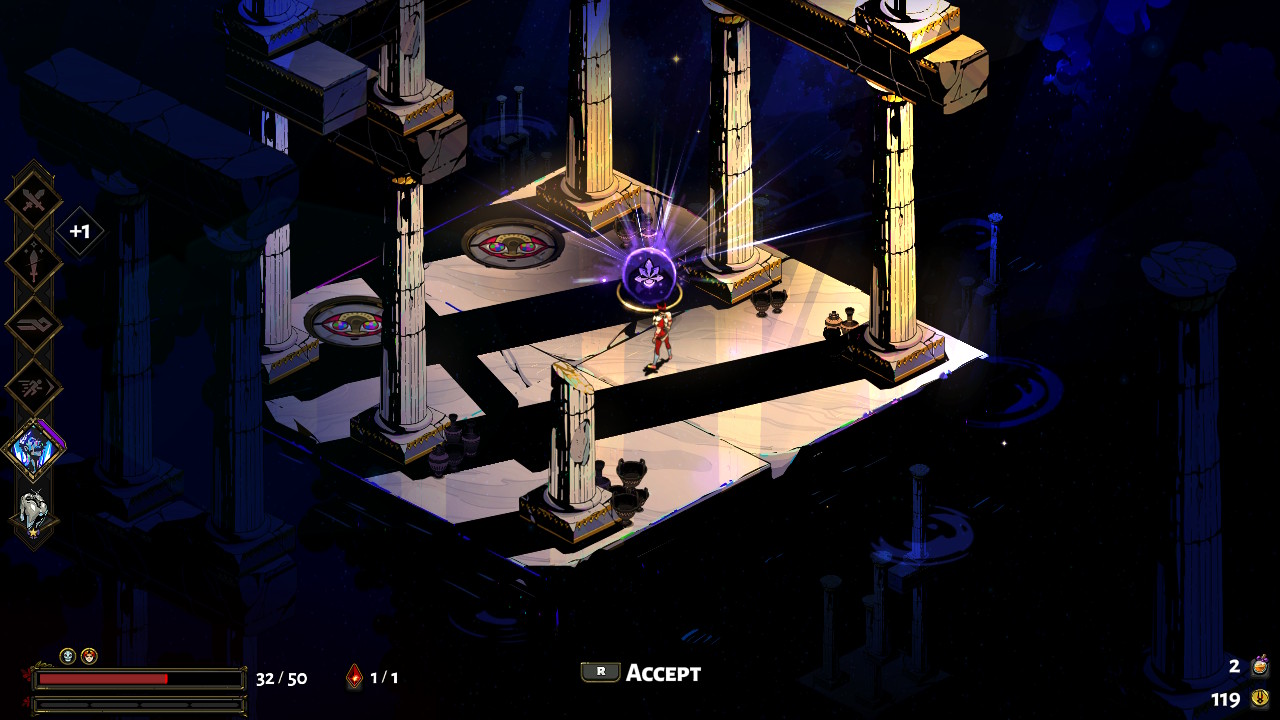 Hades is a masterclass in game design. It flawlessly integrates its incredible story with its exceptional gameplay in ways that very few games have been able to achieve before it. The gameplay is tight, complex and addictively fun to engage with. The visuals are absolutely stunning and the music is phenomenal. I racked my brain trying to come up with some form of criticism, but the only thing that comes to mind is the rare framerate drops that can occur when the combat arenas overflow with enemies, but this only happened on two or three occasions over the course of my time with the game. Hades has raised the bar for Rogue-lites and is absolutely worth your time. 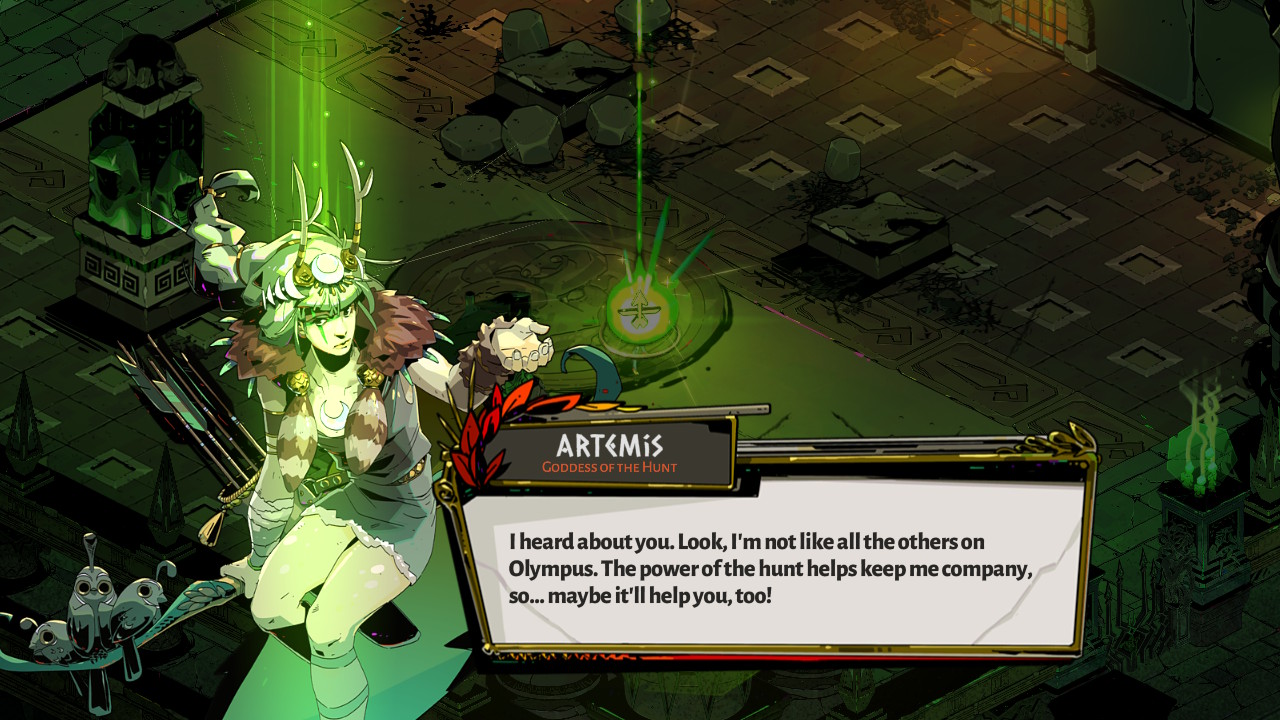 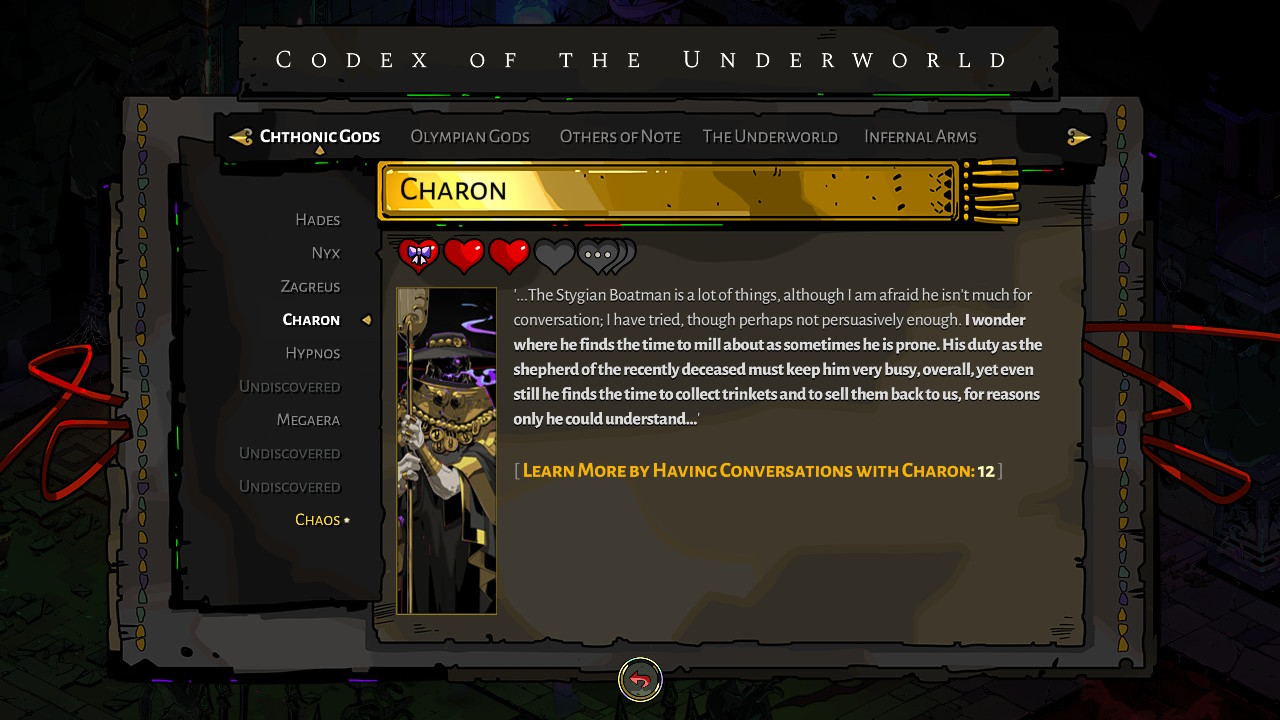 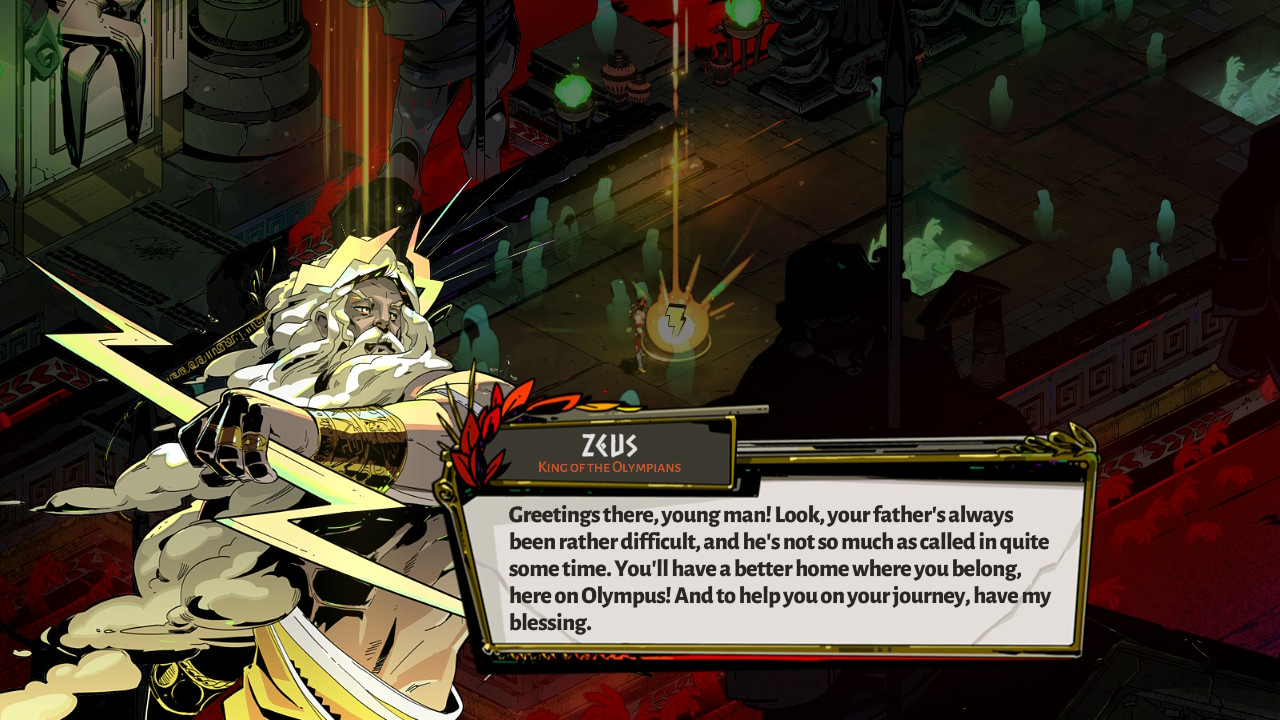