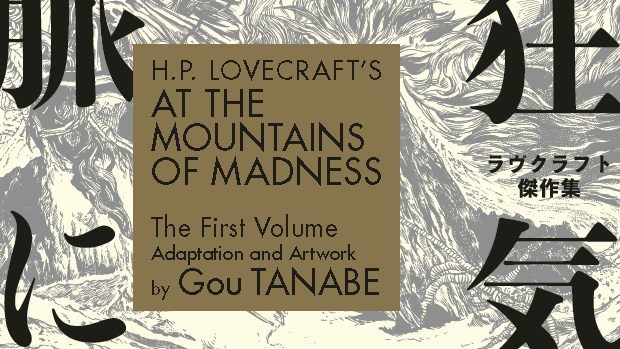 Summary: Bringing Cosmic Horror to the world of Manga, visit or return to the horrors of H. P. Lovecraft's Mountain tale via Gou Tanabe.

I was a late convert to the works of H. P. Lovecraft… not that I tried them and didn’t like them… I just didn’t get around to reading them until a few years ago… but when I did I was drawn into his mythos. Clearly Gou Tanabe was taken by the master of cosmic horror as well as he has returned to his works to bring us this Manga imagining of At The Mountains Of Madness.

I haven’t quite got around to reading At the Mountains of Madness in H. P. Lovecraft’s own words yet, so I’m not sure how true to the source material this is… but it flows well and is laced with enough confusion and panic to keep the reader on edge. The beauty of the chosen landscape is that even today, decades after this was originally written… it is still possible to imagine hidden wonders in that frozen landscape be that good or bad. There’s a quality to Lovecraft’s writing that seems so plausible, it draws the reader in with it’s diarist style and that still comes through in this telling. The approach feels a little like the comic equivalent of a “found footage” story. We are learning of the horrible events via a documented account of the events, it gives things a somewhat personal touch.

Gou Tanabe has done a great job putting into visuals what was originally simply implied or described in written form… there’s obviously a degree of flexibility for the visuals but at the same time there needs to be something familiar about them. Gou Tanabe has done a great job sprinkling the story with images that feel like they certainly come from H. P. Lovecraft’s imagination and threaten to draw us into that world of horror. The only real issue I had (and I’m nitpicking here) is that occasionally the hair of some characters (the facial hair) looked like it was stuck on… as if the character was wearing a false beard… I do wonder if this is something that wouldn’t be evident if the images were coloured (as there could be some shading where the hair meets the skin)… as I said, it’s simply nitpicking… but it did look a bit odd at times.

I love H. P. Lovecraft’s stories and to get to read them and see an artists interpretation of the horrors within is a great thrill. Gou Tanabe has done a fantastic job depicting the harshness of the landscape before the characters and has set the stage for the terrors to come. Though digital copies of Manga are always a bit fiddly (it’s not as simple as turning the book over, you have to jump to the back and then scroll backwards)… it’s a very well told story and worth adding to your collection.