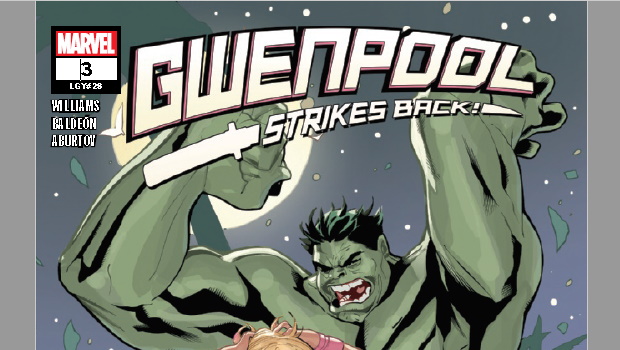 Summary: Ticking of the Fantastic Four was an entree... what's Gwenpool got for the main course? Think a Marvel Survivor Island mixed with WWE and you have a pretty good idea.

When you are trying to stay in the public eye… you have to plan your “publicity stunts”… you need to start with something that catches the public eye, then scale it up a little… then scale it up a little again and so on. What you probably shouldn’t do is follow up an invasion of The Fantastic Four’s home with a desert island deathmatch with some of the most powerful heroes around… unless you’re Gwenpool, in which case that’s totes how you do it!

Leah Williams keeps knocking these stories out of the park! I’m not sure how much of that is the character of Gwenpool and how much is just Leah’s great writing… but whatever it is, these stories are a lot of fun to read. I kind of get the impression the stories are inspired by a kind of “what would I do in Gwenpool’s shoes?”… If I was trapped/living in the Marvel Universe… how would I make sure I stayed popular enough to stay there? The best part is, there’s no limit to what you can come up with, it’s all perfectly valid and usable in the unique environment that is Gwenpool’s slice of the Marvel Universe.

I don’t think I really gave a specific shout out to the Dodson’s last time… but I will now. The covers for Gwenpool are gorgeous! They perfectly encapsulate what’s inside without giving too much away… they show the playfulness and over the top weirdness… beautiful and crazy! David Baldeon carries that lovely sense of insanity into and throughout the pages. The colour scheme sticking the bright tones and that pink and white “uniform” really seems infused in each panel… you can’t mistake this for anything other than a Gwenpool comic and that’s a good thing. The artwork is just as fun and wild as the writing and it puts a smile my dial.

This series is just pure fun. It’s very much a grab any edition series too which I like in it’s accessibility. Not everyone has the time, or patience, to devote to a long running series. Here you can either collect every issue and read them in sequence as the greater story arc it is… or just as easily pick up a copy from somewhere in the midst of the run and enjoy that portion of the story as if it was a one shot. Having said all that, I’d recommend grabbing them all and certainly this one should be picked up and read if you want a good giggle with and at the Marvel line up.