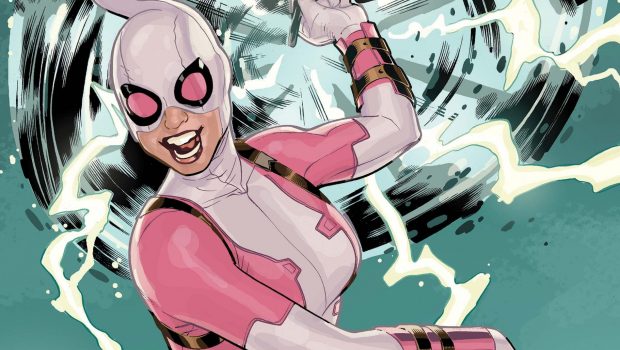 Summary: Gwenpool vs. the Hulk, who will win?

Gwenpool is in a battle royale with the other Avengers but has bit off more than she can chew with the Immortal Hulk. In an on the nose 4th wall break she goes into the Marvel meta-verse to get other versions of herself to help in her fight.

As the main character says herself this is only a short series but I also feel you need to have read it all to get the story. I did not really know what is going on or why this character had the ability to step outside her own reality seemingly across dimensions and is aware of the fact she is a comic book character.

If you are a fan of this character and the series I would recommend it but seems to be an acquired taste. I know the Deadpool character is quite similar and does the same sort of thing but this does seem different as it is in print and has the printed page to work off.

Not really an essential purchase, but if you are a fan of the character and want to see her doing something different I would recommend. Other people would wonder what is going on and it is certainly not the best point in the series to start reading.