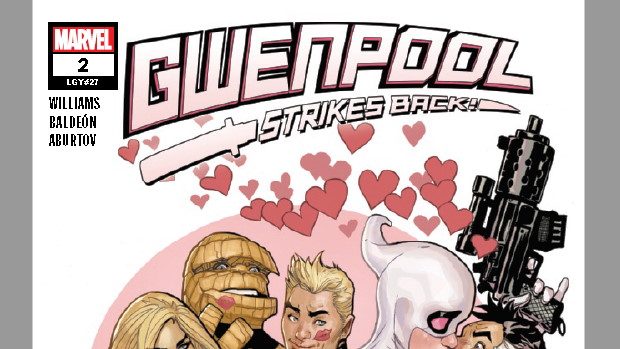 Summary: It's difficult enough dealing with one Pool.... but when you throw another in the mix, you know you are going to be stretched to breaking point... not great when you are Reed Richards.

How do you top unmasking Spiderman as a stunt to stay relevant in Marvel comics… apparently, if you’re Gwenpool, you take a shot at the Fantastic Four, the First Family of Marvel. Seemingly working on the notion of “any publicity is good publicity” Gwen has her eyes set on thrusting herself right in the middle of the Fantastic Four… after all… what could get her more attention than that?

I thought Deadpool was my go to, non “mainstream” hero… but since reading Gwenpool #1 and now this edition… I’m starting to think the ol’ Merc has a contender for his position. All the free flowing comic referencing fast talking without the unrelatable penchant for mercenary activity. Far more relatable than Deadpool but just as irreverent. Having said that… this issue has them both anyway so why choose! Gwen continues with her quest to stay relevant in Marvel comics by inserting herself into them in any way she can in as bold a way as possible… in this case it’s as “attempted homewrecker” to Marvel’s first family… the Fantastic Four… much like Deadpool… surely writing for Gwenpool must be a massive joy! Leah Williams really has a great sense of rhythm for the dialogue and though it is certainly on the wild side… it feels very natural coming from these characters. There’s such a lovely playful innocence to Gwenpool that it’s hard not to love her as a character… even while she’s doing such outrageous things.

I really like the artwork through out this issue. There’s a certain level of polish that makes it seem as though there was more time to put into adding detail, beautiful colours and shading. Vibrant and clean images just make this whole story a pleasure to look at. I wonder if David Baldeon ever thought he would be drawing Reed Richards the way he does in this comic… or Gwenpool and Deadpool in the place that they end up?

I love the merc with a mouth… but I think I love Gwenpool just as much. When you put those two together I’m thrilled, twice the fun with no one feeling left out. If you haven’t already jumped into Gwenpool… this is a great chance to get onboard. Beautiful art, writing that will have you laughing all the way and just a lot of fun. Grab a copy now.