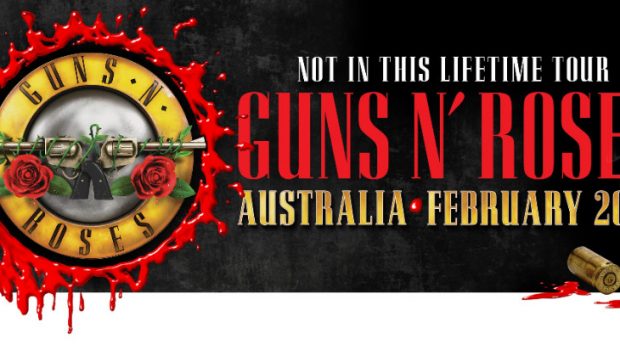 GUNS N’ ROSES NOT IN THIS LIFETIME TOUR CONFIRMED

THE ROCK TOUR OF THE CENTURY IS COMING…..
GUNS N’ ROSES
Not In This Lifetime
AUSTRALIAN DATES ANNOUNCED!

Founder Axl Rose, Slash and Duff McKagan regroup for the highly anticipated ‘Not In This Lifetime’ Tour

Following months of speculation from rock music fans across the country Paul Dainty President CEO of TEG DAINTY today announced dates for the Australian leg of Guns N’ Roses Not in this Lifetime mammoth stadium tour.

Founder Axl Rose and former members, Slash and Duff McKagan have regrouped for one of the century’s most anticipated tours. Currently touring the US and South America before heading to Australia in February 2017, Rolling Stone said: “This was the real thing, the thing we’d all been waiting for: the triumphant return of one of the most important bands to cross rock music history. And it happened in our lifetime.”

Kicking off in Brisbane on Tuesday 7 February at QSAC Stadium the Not in this Lifetime tour will then travel to Sydney’s ANZ Stadium on Friday 10 February before heading to Melbourne on Tuesday 14 February where the band will ignite the iconic MCG in the first major concert there since 2009’s Sound Relief. The band will play Adelaide Oval on Saturday 18 February and Perth’s Domain Stadium on Tuesday 21 February.

Tickets for Guns N’ Roses Not in this Lifetime tour will go on sale to the general public on Friday 26 August. Telstra Thanks pre-sale just for Telstra customers starts at 10am in Sydney and Perth, 11am in Melbourne, 12 noon in Brisbane and 1pm in Adelaide (local time) on Tuesday 23 August. Go to telstra.com/music for details.

The tour will mark the first time that founder Axl Rose and former members, Slash and Duff McKagan have played together for Australian fans since their infamous 1993 Use Your Illusion tour.

Following the group’s 1985 formation, Guns N’ Roses injected unbridled, unrivalled, and unstoppable attitude into the burgeoning Los Angeles rock scene. Their spirit went on to captivate the entire world with the release of their 1987 debut Appetite for Destruction –the best-selling U.S. debut ever, moving 30 million copies globally. In 1991, the seven-time platinum Use Your Illusion I and Use Your Illusion II occupied the top two spots of the Billboard Top 200 upon release.

Over the course of the past decade, Guns N’ Roses have performed sold out shows and headlined festivals worldwide following the critically acclaimed release of 2008’s RIAA platinum-certified Chinese Democracy. Six studio albums later, Guns N’ Roses are one of the most important and influential acts in music history and continue to set the benchmark for live performances connecting with millions of fans across the globe.

In Australia Guns N’ Roses unwavered popularity is highlighted by their unparalleled chart success since 1987. The band boasts 14 ARIA Top 50 singles, alongside every one of their studio releases enjoying multi-platinum accreditation. The highlights include: Appetite For Destruction 8x Platinum, Use Your Illusion 1 4x Platinum, Use Your Illusion 2 5x Platinum. The dual release of Use Your Illusion in 1991 saw the band hold the #1 and #2 place on the ARIA chart. 1993’s The Spaghetti Incident? and Chinese Democracy debuted at ARIA #1 and #3 respectively and each achieved Platinum status. Guns N’ Roses Greatest Hits achieved 8x Platinum and spent 346 weeks in the ARIA chart.

Witness the stadium tour of the century this February 2017.

GUNS N’ ROSES NOT IN THIS LIFETIME 2017 AUSTRALIAN TOUR DATES:
Tickets from $91.65* are on sale to the general public on Friday 26 August