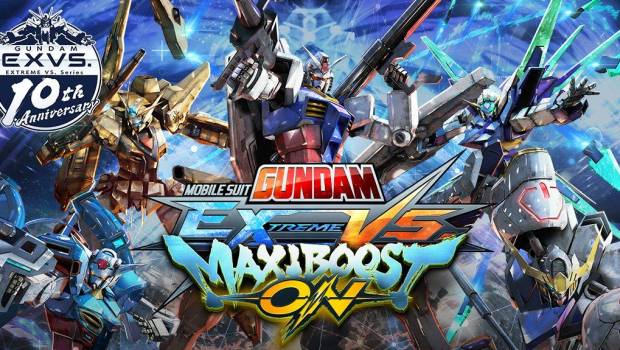 Summary: Gundam VS Maxiboost is the ultimate Gundam fighting game to date. With so little to fault, just what the H are you waiting for?

Gundam Extreme VS Maxiboost ON, is the peak of the ever long running arcade series. An immaculate, incredible complete package. Whether you’re playing solo, co-op or online. The game has almost everything you need to have some crazy giant robot carnage. New players, like myself, may struggle with mechanics at first, however when you find that optimal groove. The arena based action just flows magically — practice makes perfect. 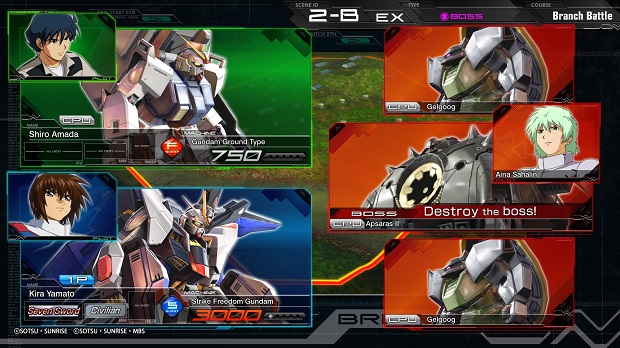 Ultimately, Gundam VS Maxiboost biggest issues and there are a few, are down to a few small but obvious walls. The game is unforgiving, there’s a rather imposing skill tree to climb if you want to be good. There’s no full tutorial in the game, so everything is expected to be prior knowledge. Luckily, there’s Maxi Boost mission mode, here in the first few rounds you are given a very basic grasp of controls and tips. It’s a great introduction and adds a whole lot more to do. Some missions allow you to pilot anything, some restrict you to specific suits. Others require you to knock out strong targets, in order to take on the boss. Perform well in some and take on extra hard targets for more rewards.

There’s more to the game than just its PVP. With modes like the Maxiboost Missions and Branch Battle mode, there’s a good amount for someone like myself who isn’t huge on multiplayer only games. The game is immensely competitive however. Online battles are fierce and hugely challenging. But even the CPU opponents are no slouches either. I like me a challenge, but I also being able to complete my task. The difficulty curve is a very even one, but can seem like climbing a the Kakoda trail, blanketed in rain. Don’t be careless, lest you regret it.

The key is in movement. Knowing when to dash, when to dodge and when to attack is king. This is where the difficulties lie therein, the act of simply moving about the arena can be tricky at first. With sluggish controls and plenty of button combinations. Gundam VS has always marched to the beat of it’s own drum, unless you can match it, you’re in for a bumpy ride. Every suit has it’s perks and quirks, from melee attacks, to ranged. Even the way they move is different. One thing remains true amongst all fighting games, practice makes perfect. 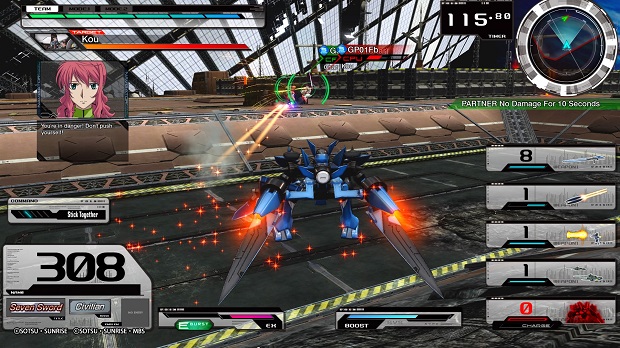 The graphics are amazing. Colorful and vibrant. Excellently detailed, perfect replicas of the units as they were in their respective series. A good level of detail in the background, paired with superb use of lighting and special effects. With plenty of options to customise things like, title, profile pic and even hud styling. You can also choose a pair of navigators, one for menus and the other for in missions. This makes for a more authentic Gundam experience. You can unlock stuff by leveling your affinity with them by completing missions with them. Character art is also superbly recreated. As a result the game has so much more depth, than simply a fighting game. I very much adore the series intro scenes when selecting a series’ Mobile Suit and entering the Branch Missions.

Touching back on the movement required to play well. A feature to help aid the learning of keeping on the move is the warning system. Yellow markers make for handy alerts for off screen targets. And red markers, for incoming attacks. Along with the radar, it’s key to master these skills to play effectively. Use it wisely, for it will aid your struggles. Running low on boost causes a change in colour. Don’t run out of boost either, you’ll be a sitting duck. The EX bar could use some work, it’s too small and it needs more emphasis to make it stand out. As it is, it’s very easy to miss and this can sometime mean the difference between winning and losing. Especially in online matches.

As if the game couldn’t get any better. The audio will take you on a stroll down memory lane. With popular tracks from every Gundam Series and impeccable voice talent from the main voice cast reprising their roles in each series. You could do no wrong. Want different menu music? Change it. Want to pair up a sweet tune to match a particular map? Set it up and vibe as you beat down your foes. Want to hear those famous one liners from your favourite characters? Play as them, or play against them. Bonus points if you pick and choose allies and enemies from the same series. You’ll get some juicier interactions.

Gundam VS Maxiboost is full of memorable sound effects. They combine to immerse oneself fully. The pew of beam rifles, the clang of giant metal feet. To the crackle of beam sabers. Unique sounds that you don’t get anywhere else. It’s surprising just how well the sounds of Gundams’ of old merge so well with the newer series. It just goes to show you that Gundam, no matter how old or new. Retains the same spirit it did all those years ago, when Amuro first came across the RX-72 Gundam. 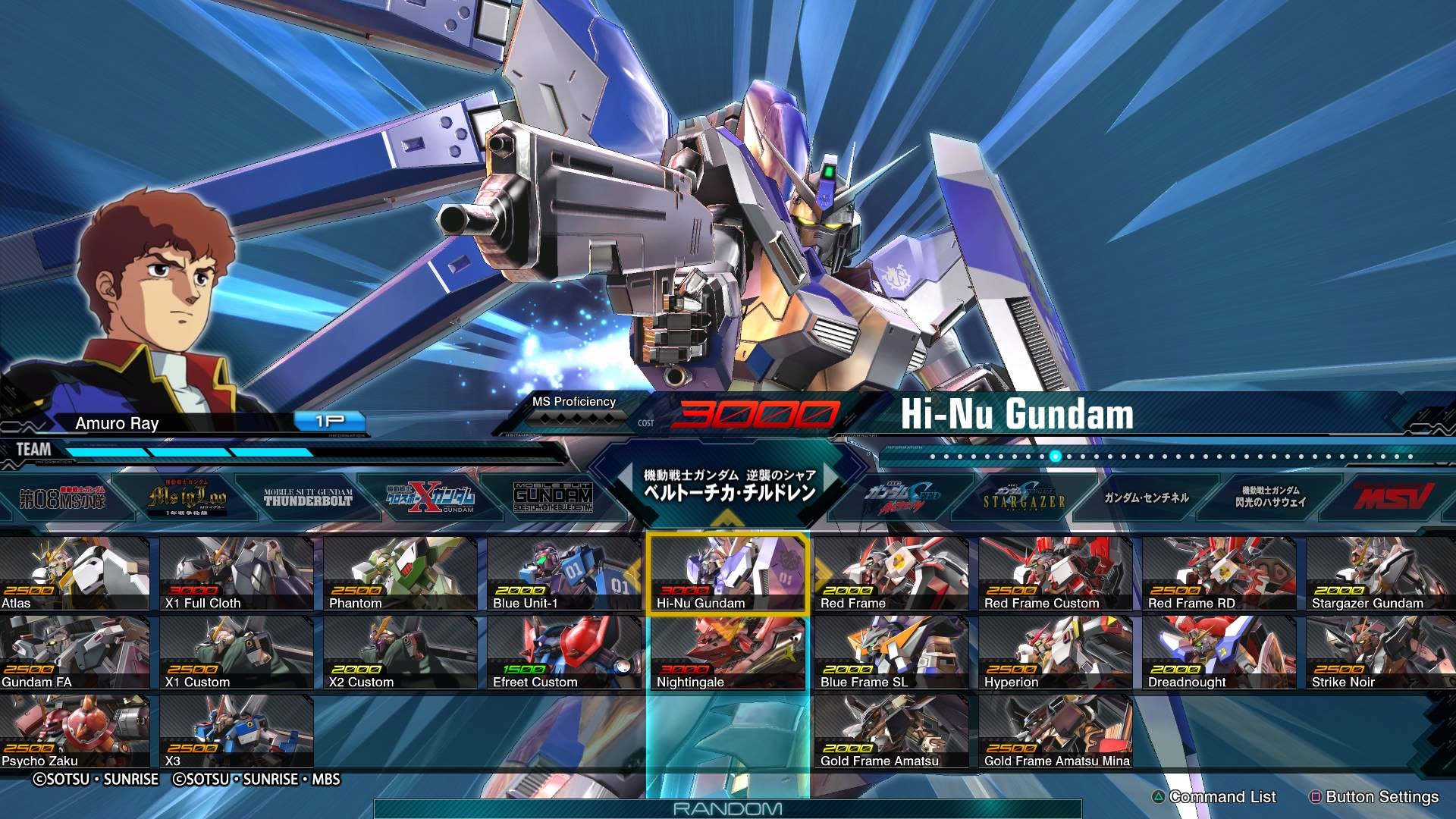 Gundam VS Maxiboost ON is the most complete Gundam VS title to date. With a massive roster of Mobile Suits and characters to play. A butt load of offline and online content to play. Challenges to beat, high scores to achieve and objectives to clear. There’s plenty for players to do. The aforementioned Branch Style missions have great replay-ability. Do you choose to beat your own highscores? Do you aim to tackle the toughest foes? Bonus points if you take on 7 of the same types of rounds before confronting the boss at the end. The boss fight itself is a little lackluster and repetitive. Cliche as it is, the journey is more important than the destination.

Maxiboost mode is incredibly vast. I’m not even halfway through and I’ve done over 30 missions. Completing them earns you GP which can be spent on cosmetic rewards. This let’s you customise your online profile. I’ve already taken the liberty of customising my HUD in the style of my favourite series, Gundam 00. Little things like these are fun, easy and best of all free ways to keep your players coming back. For me, it’s the perfect pick me up after a long days work.

For newcomers, the steep learning curve might be a hard pass. But I implore you, practice a bit, overcome that initial challenge and a world of metal carnage awaits. For fans, this is the truest Gundam VS and the ultimate crossover. 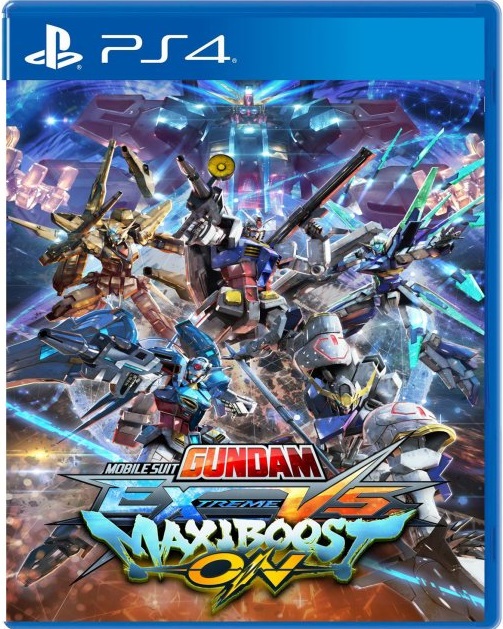