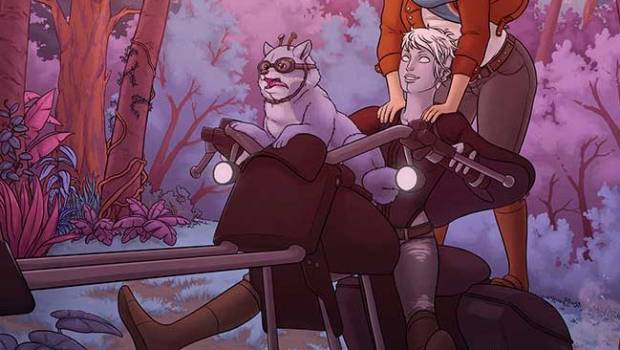 For a Few Credits More

The second issue in the new series from Action Lab Danger Zone.  The first issue of Guncats felt like it was trying to keep things simple to introduce the characters and generate some interest.  With the second issue, the creative team ups the ante.  Adding to the adventure and starting to establish the arc to move the story forward.

One word describes this cover:  fun.  Iola and Cass are riding a hover bike and carrying their alien dog (who finally makes an appearance).  There is more detail in the cover to Guncats #2, with the forest in the background being very well detailed and adding more to the sense of fun and adventure that this cover implies will be found within.  Though this is a title aimed at mature readers, the cover shows that the primary focus is clearly providing a fun book.

The art picks up where the last issue left off.  It begins simple like Issue #1, and when they land on the planets surface the level of detail in the background picks up exponentially.  It draws the eye in and deepens the sense of adventure.  The characters continue to look good.  The various facial expressions used by Cass are well done, while Iola is more static, likely due to her alien nature.  As such, it fits with the characterization and the story.  The Bulgor, namely the alien dog from the cover, also looks good.  For the bulk of the issue it just looks like a dog with antenna, but when it reveals its alien nature it looks truly dangerous.  The art is bright and fun, and adds to the feeling of adventure that is central to the story.

The issue begins with the Guncats embarking on the job they picked up at the end of the last issue.  They are en-route and reviewing the humourous notes that Cass took from the briefing provided by their employer.  Upon landing on the planet their quarry is located on, they discover another ship.  Cass, being pragmatic, assumes this is another bounty hunter seeking the same quarry and cuts their fuel line.

They are on the planet to capture an exotic pet for their employer, and quickly discover it, only to be quickly ambushed by another group of hunters.  The cute Bulgor, who has taken a liking to our heroes, quickly dispatches the other bounty hunters, only to be captured by the owner of the other ship.  The book wraps up this portion of the story nicely, with the Guncats keeping the Bulgor as their new pet.  It also foreshadows that their rich employer is going to become the primary antagonist.

The second issue of Guncats builds well off of the first issue.  It’s also early enough in the series that there isn’t a convoluted story to catch up on.  This makes it a good fit for new readers to get into.  The art is more detailed than the last issue, and complements the story well.  Story-wise, this issue is light and fun.  It is well paced, and very easy to get into.  The characters are likeable, but not overly developed at this point.  This issue also does a good job preparing for the next issue, giving readers an idea of where the general story is going.  The creative team has done a great job creating a fun title.  There is some strong language within the book, so it may not be a great fit for kids.

Guncats #2 builds off the first issue with a well paced and fun follow up.  4 out of 5 stars! 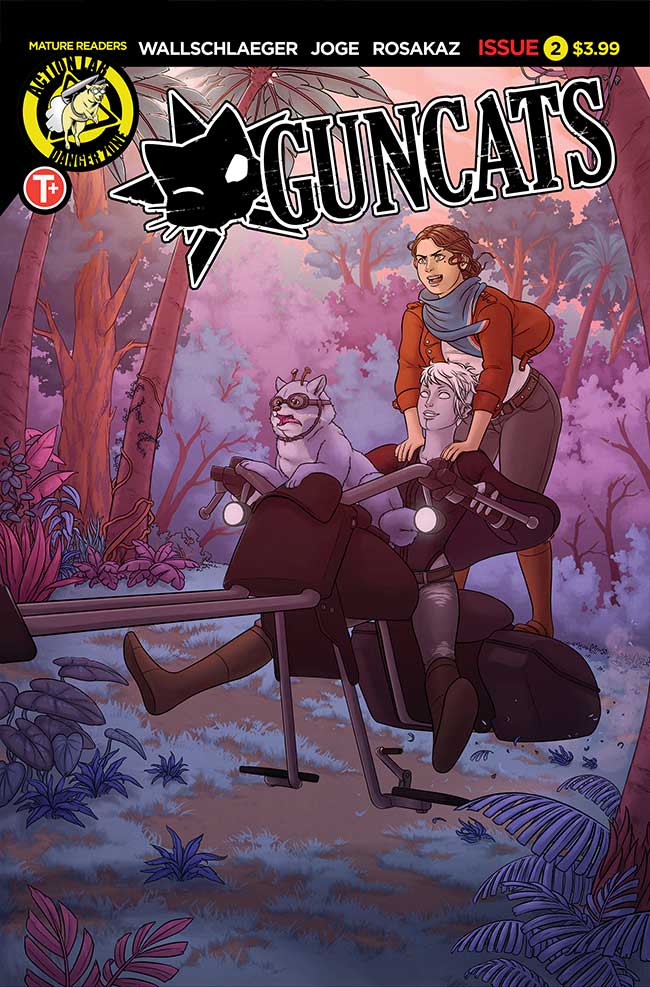