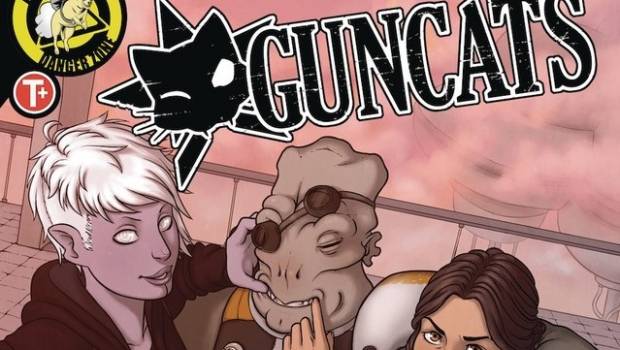 Summary: Fun and breezy to read

A Fistful of Credits

Guncats #1 is the first issue in a new series from Action Lab.  The series focuses on two female bounty hunters, and opens with them stalking a bounty.  Created by Samantha Wallschlaeger, Joge, and Rosa “Rosakaz” Rantila, this is a lighthearted bounty hunter tale.  It is listed under a mature imprint, and features some strong language and a bit of blood.  As well, as an introductory issue, this is a great place to get on board with a new series.

The cover of this issue features our bounty hunter tandem cuddling with a smiling alien.  Though they don’t look overly tough or dangerous, the title of the book hints otherwise.  All three characters on the cover are smiling and happy, which does advertise a light-hearted book.  It clearly has a sci-fi setting, based on the alien appearance of one of our heroes, the alien sandwiched between our team, and the alien house pet in the bottom corner.  While the cover doesn’t jump right out, it does speak to a fun book.

I enjoyed the art in this book.  It is fairly simplistic, not a lot of depth or detail in backgrounds, but the characters are all well drawn and clearly the focus.  The art focuses clearly on the characters in the story, making it clear that they are the focus, and the setting is secondary.  In this regard it works very well.  I enjoyed that you can clearly see the moods of the characters in both their body language and facial expressions.  The action sequences are also well drawn, with blurring lines used to emphasize the speed the chase is taking at.  In some cases this could look tacky, but here it works.  The book is well drawn and uses a style that does a great job of supporting the story the creative team is telling.

The story focuses on two bounty hunters, Cass Morales and Iola Zolari.  It begins in a bar, with Cass sitting at the far end of the bar nursing a drink, while a large and aggressive alien is threatening the bartender.  She is communicating with her partner via a headset and clearly has a sarcastic sense of humour.  She follows the alien out when he leaves, and the chase begins when he notices her.  The chase doesn’t go as planned, and the duo are forced to improvise.  The duo is believable as a pair of underdog bounty hunters, or guncats as they are referred to by both the title of the book and their target.

I especially enjoyed the interaction between the two lead characters.  The friendship between Cass and Iola feels real.  There is nothing forced, and the pair talk and interact like long time friends.  Between their banter, the brief pause when they captured their bounty in perhaps the funniest scene in the book, and the celebration at the end of the book, the relationship between these two characters gives the story a lot of heart and credibility.

If there was mantra for this story it would be this: Keep it simple.  The friendship between Cass and Iola doesn’t feel forced, and their interactions feel sincere and endearing.  The writing doesn’t need to provide a complicated backstory at this point, the duo are friends, and are simply written as such.  As well, this issue is a basic chase issue.  Our heroes chase down and capture a bounty.  It’s fun, but not overly complicated.  It’s just well written and well drawn.  The art in the story also fits this mantra.  It’s not overly developed, and the detail is saved for the characters, keeping the readers focus where it needs to be to serve the story. 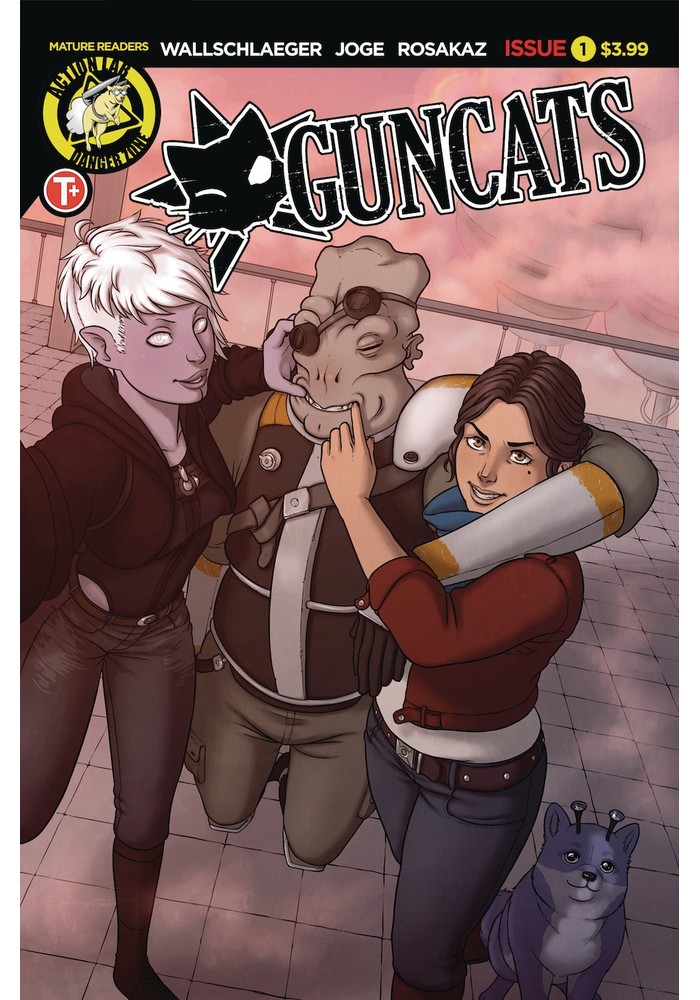