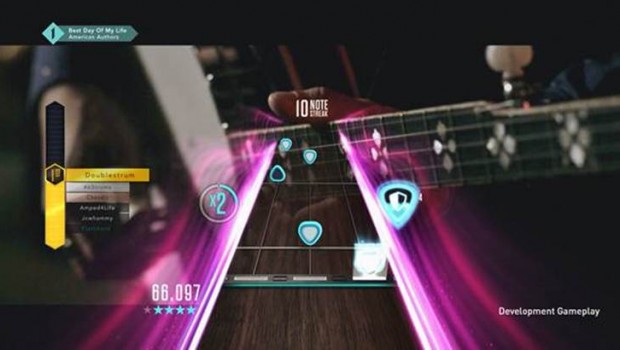 In celebration of San Diego Comic-Con this week, the team at FreeStyleGames is showing off Hero Powers in Guitar Hero Live.

Any fan of the franchise knows that no shredding skills are complete without a few in-game boosts. In Guitar Hero Live, they are called Hero Powers, the in-game power ups that can give you a score boost or competitive edge as you rock out in GHTV.

Guitar Hero Live will be available October 20, 2015 on PlayStation 4, PlayStation 3, Xbox One, Xbox 360, Wii U and select mobile devices to be announced soon.  The game is yet to be rated by the Australian Classification Board. For more information, please visit GuitarHero.com.

What are Hero Powers?

If you remember Star Power from previous games in the franchise, Hero Powers in Guitar Hero Live are a lot like that, only much cooler. Hero Powers can be used in GHTV to give you power-ups that affect different areas of gameplay. You can activate a Hero Power to boost your score while playing solo, or to give you a competitive edge during multiplayer. They are activated by the familiar tilt of the guitar, or you can just hit the Hero Power button directly on the guitar controller.

Higher scores allow you to earn even more rewards and level up faster.

How to earn and equip Hero Powers?

As you play the game, you constantly earn in-game currency, which you can then use to acquire various Hero Powers. Before you play a song in GHTV, you’ll have the option to choose which Hero Power you’d like to have equipped during the duration of that song for you to activate when you please.