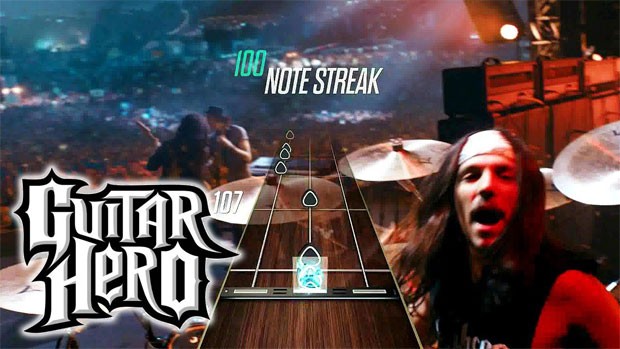 Sydney, Australia October 21, 2015 – Guitar Hero is back! Activision Publishing, Inc., a wholly owned subsidiary of Activision Blizzard, Inc. (Nasdaq: ATVI), yesterday announced the pop culture phenomenon that captured the hearts of 40 million players across the globe was officially available at retail stores nationwide with the completely reinvented Guitar Hero Live. Developed by FreeStyleGames, the critically acclaimed studio behind DJ Hero and DJ Hero 2, Guitar Hero Live introduces a radically improved guitar controller, hundreds of songs and two brand new ways to play: GH Live, a first-person point of view where you play in front of a real crowd that reacts to how you perform, and GHTV, the world’s first playable music video network.

“Guitar Hero is one of the most beloved gaming franchises of all time, and now, after years of research and development, it’s back, totally reinvented, and better than ever with Guitar Hero Live,” said Eric Hirshberg, CEO of Activision Publishing. “The experience of being up on stage, in first person, playing in front of a live crowd that responds to your performance in real time, will put your heart in your throat. And GHTV, which lets you play along to your favourite music videos will keep the game fresh with a continuous stream of new content. We’ve poured our hearts and souls into Guitar Hero Live and we can’t wait for fans to get their hands on it. It’s going to be awesome.”

Activision and FreeStyleGames are also bringing the Guitar Hero Live experience to iPhone, iPad and iPod touch at launch and Apple TV later this year. The mobile version of the game is available as a bundle with a guitar controller that works across Apple devices, letting fans live out the rockstar experience anytime, anywhere.

Each mode of the game delivers a new take on the music game genre. An unparalleled leap in rockstar realism, GH Live is a live-action experience that delivers the full emotional roller coaster of being on stage, with players performing in a real band, in front of real crowds, who react in real time to how well or poorly you play. Shot live with musicians performing in front of real crowds, GH Live delivers the raw excitement and stage fright that comes with owning the stage in front of thousands of cheering – or jeering – fans.

GHTV is a revolutionary new way to play Guitar Hero. The 24-hour playable music video network lets fans play along to a continually-updated collection of official videos, from the newest releases to favourite hits. GHTV is a living, breathing platform that will launch with hundreds of songs and will continue to grow, with new songs added weekly, serving as an ever-expanding source for music discovery while bringing the party atmosphere back to the living room. In GHTV, fans can play along with different channels of music or choose to play one of hundreds of songs on demand. Fans can win fame playing solo or with their friends in local head-to-head multiplayer, and online against other players trying to master the same song. And simply by plugging in a USB mic, players can sing along to the music in both GH Live and GHTV with lyrics displayed on screen.

GHTV also includes Premium Shows, which highlight premium playable content such as live concert footage, debut music videos in the platform and more. Starting today, fans can experience the GHTV premiere of the Avenged Sevenfold Premium Show, including playable concert footage recorded at the band’s recent headlining performance at England’s venerable Download Festival. Players will also be awarded with a custom Avenged Sevenfold themed note highway and player card. Activision is also giving fans a chance to get in the game by submitting clips of themselves performing Ed Sheeran’s hit song “Sing” through the musical.ly app, with winners being featured in a world premiere music video that will be playable in the game. Fans can visit www.guitarhero.com/ghtvstar for more information.

Guitar Hero Live also introduces a new guitar controller that features six buttons: two rows of three buttons that better reflect the way people naturally play and deliver more fun for players of all abilities. This simple innovation makes it easier for beginners to play and harder for veterans to master. Additionally, fans can sing along in the game, complete with lyrics on screen, adding another way to play together in the same living room.