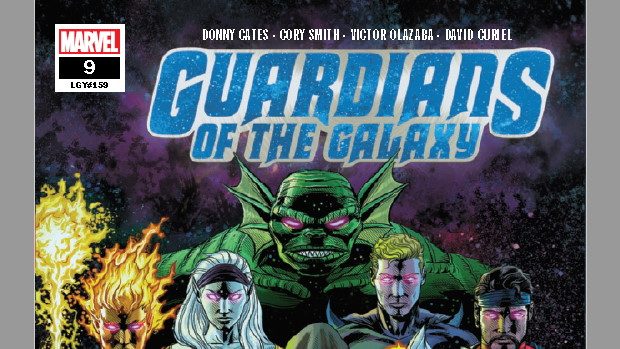 Summary: The Guardians are scattered by the Universal Church Of Truth. Star Lord is trying to reason with his father while Groot and Moondragon are working with an ailing Rocket to try and help their friends.

The Universal Church Of Truth has ripped the Guardians apart. Rocket has revealed his secret and is out of hiding but his health is failing. Groot and Moondragon, together with Rocket in a life support mechsuit try to find help for their friends… but the odds are stacked against them all.

It’s always an interesting dynamic to play family members off each other… add to that the larger than life characters in comics and you have some pretty big family issues. Star Lord is stuck having to try and reason with his dad but seems destined to only learn what he has in store for the future. Rocket is an interesting character as well and Donny Crates is tasked with not only giving him his familiar smart alec dialogue… but still retaining his likability… which he does wonderfully.

If I’m super blunt… I’d say I don’t think the cover art does the inside artwork justice. I think it’s mostly to do with the colouring/shading of the front… it looks a little too old school for my taste (though I’m quite sure there will be many people who love it). Inside the pages there are some nice examples of shading and the colours are much more vibrant.

Some comic series have issues that can stand on their own and be a decent story in and of themselves… some you really need to have at least a few of the other issues to get a good hold on what’s going on… or to really enjoy the story that is being lain out. I feel this fits in the latter of those two categories. It’s fine as a part of a story but I don’t think this single issue is really enough to get into the meat of all that is going on. That isn’t a bad thing… it just means that you will be left eagerly awaiting the next issue… which given how this one ends, should be quite a ride! If you’ve been following the series I’d say it’s a no brainer… you will want this in your collection… if you haven’t… maybe pick it up… or wait for a collection of the entire story.