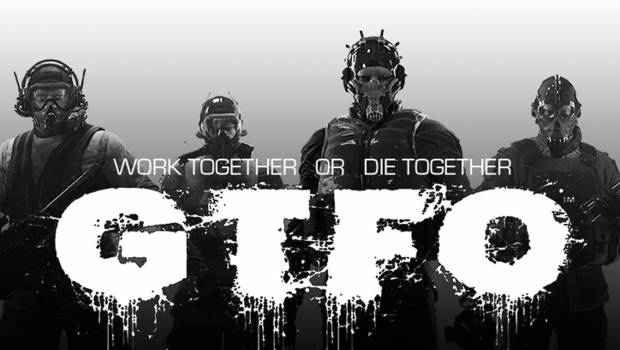 From the very first time I saw GTFO back in 2017 I was drawn to it. A co-op shooter from the creators of Payday that was being billed as “Left 4 Dead meets James Cameron’s Aliens” was all I needed to be on board. The trailer portrayed this dark and gritty underground space, not quite sci-fi but not exactly grounded in the real world either. It looked horrific, and put the emphasis on co-op gameplay front and center. This was all from what I thought to be a highly polished vertical slice cinematic trailer, and if games like The Division taught me anything, co-op was nothing more than tougher enemies and more bullets.

GTFO is looking to really change the expectations of what a co-op can be.

GTFO doesn’t simply put an emphasis on teamwork, it absolutely demands it. Without a supporting cast you are destined to be wiped out in your very first encounter, and the developers are more than aware that this won’t suit everyone. Not only does the Steam page include a disclaimer that reads “GTFO is seriously hard, you need dedication and teamwork to survive! This is not a run and gun game, please watch a stream or a YouTube clip so you know what you are getting into.”, but in my recent live play through with the developers, they stated that they intentionally have made it this way.

“We want to try and be as clear as possible, and state that this is not a game for everyone,” Robin from Ten Chambers Collective said during our live stream. “There are other games out there if you are looking for something that’s easier. Left 4 Dead for example, we love that game, but it’s not as heavy on the coop gameplay as GTFO is. It’s a great game, but it’s not the game we are trying to make.”

That really shows. Before our session with the developers I grabbed some mates and jumped in to see what it was all about. Four players choose different weapons and toolsets to build out a team, and then they enter a crater to scavenge for supplies and tools to unlock the next area. These raids are called expeditions, which as a series make up a “Rundown”, and they certainly are no joke. For our group to complete the first expedition of Rundown #1 we died approximately 891432 times, and we took just shy of three hours to walk out of there with the win. It was a brutal onslaught of learning the nuances of each enemy type, what the equipment that we scavenged did, how to effectively use our tools to create choke points, and how to scavenge for weapons and supplies. GTFO tells you nothing. It just drops you in the middle of a nightmare, and forces you to learn the mechanics yourself. That’s kind of refreshing, and Ten Chambers Collective plans to keep it that way.

“I like to see it as raids like in World of Warcraft or something. If you die it’s challenging but it’s really fair, and when you finally beat it, the sense of excitement and accomplishment really shines. That’s the kind of game we are making. We are not being a mass market title, we are focusing on the niche that we are interested in.”

For a game called GTFO that brandishes all sorts of cool weapons, I was super surprised by how integral a stealthy approach Is needed to survive. Each player is equipped with an insanely large hammer that can be charged for a full force swing, which will often yield an instant kill when dealing with many of the smaller enemies in an expedition. They don’t tell you this however, but instead you are forced into it due to the limited amount of ammo you will begin with, and the resources are scarce. Whenever the game has you resulting in a firefight, you’re on the ropes and you wonder if you’re going to be able to scrounge up enough to survive the next encounter. 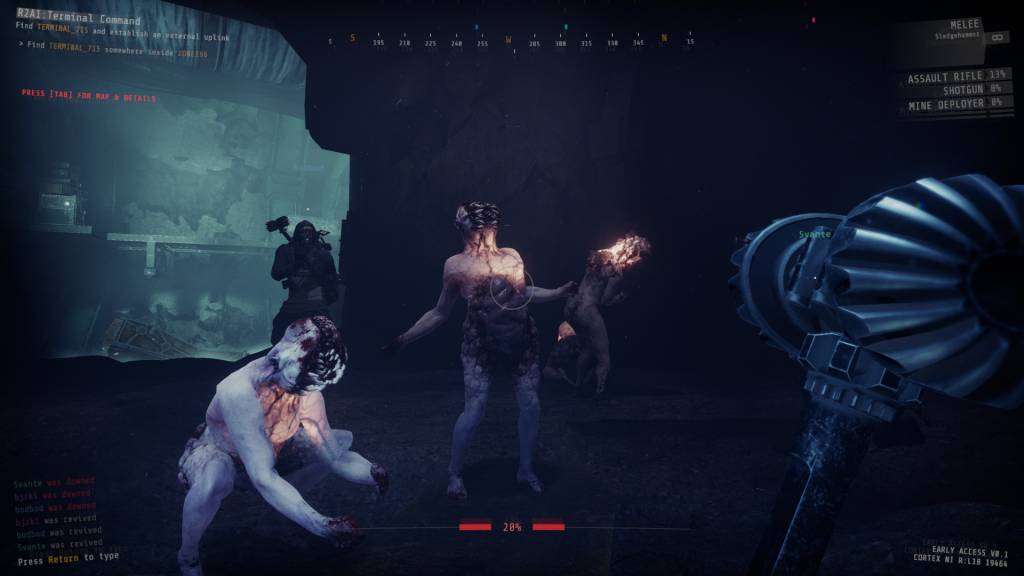 Everything about the gameplay ties into this feeling of cohesion, a perfect synergy of game mechanics that somehow work in perfect harmony. For instance – one player may have the C-Foam Launcher that shoots sticky goo that slows down the onslaught of enemies, the other a deployable Sentry Gun. One player will place a huge puddle of foam, the other will place a sentry watching the rear, while a third may deploy some trip mines in the middle for when the enemies eventually break through the foam. After the firefight, another player will go hack a terminal (that uses a real-time bash command prompt mind you!) to ping an item list which will then trigger a sound in the room that item is located, and continue on the journey. The point is that there’s always a strategy, always something to do, and always some way to contribute towards the knowledge of an expedition.

But there is definitely some room for improvement. GTFO is currently in Early Access, and the developers are constantly updating and balancing, but also adding in new Rundowns and expeditions for players. They still have a long way to go, and while they weren’t necessarily ready to go into the specifics, there will be a player progression system, and a lot more story to be added as they continue the journey.

I asked the team how they hell they balance a game this hard. Usually as a game developer you are constantly playing and tweaking your game, it can often be hard to get a real sense of the challenge when you know the game so intimately. That’s not a problem for Ten Chambers Collective, as Simon Viklund explained easily “we just make it to a point where it’s hard and challenging for us, then look at the player data.” It seemed to be an honest answer, because we failed to complete an expedition during our livestream together!

GTFO is a wholly unique experience, that uses co-op as a mechanic rather than an extra feature. It’s a thrilling experience filled with unmentionable horrors and feels more like a puzzle game rather than a quick-fire shooter. That’s nice, forcing you to take a more considered and measured approach, to fight tooth and nail until the very last moment for a successful extraction. If you want something more on the Escape from Tarkov scale of hardcore, with a central need for friends for completion, then GTFO should be on your radar.