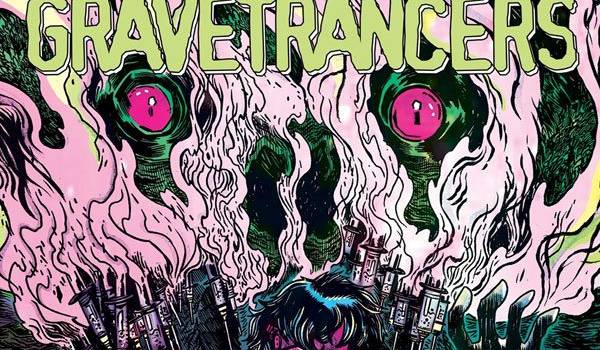 Summary: A thrilling horror tale, with a disturbing twist.

Siblings, Maribel and Anthony, are on a journey to seek out the grave of their estranged father so that they may pay their final respects. Their adventure takes a dark and disturbing turn, leading them down a nightmarish path filled with psychedelic drugs and flesh-infused adventures. 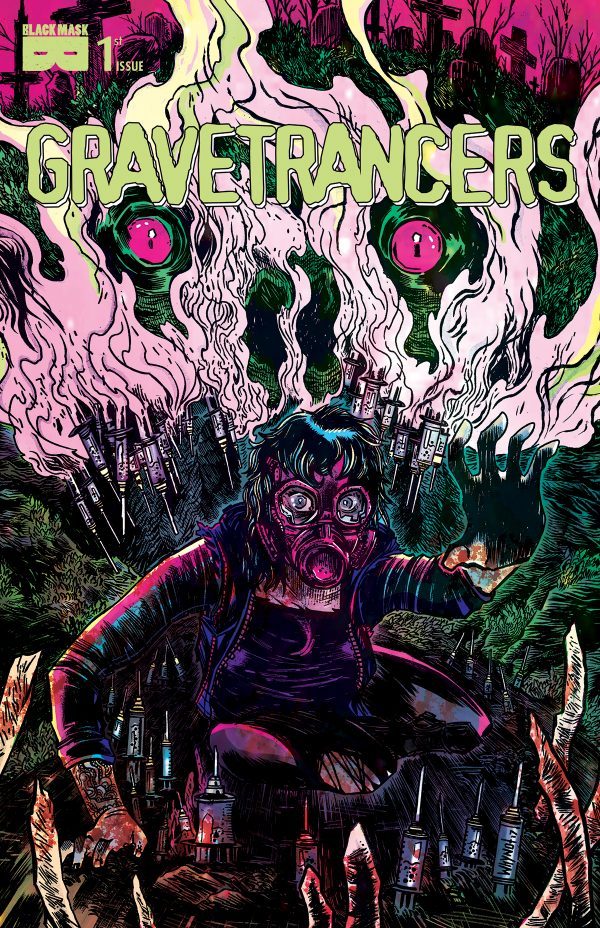 Gravetrancers #1 begins with background lore, explaining that throughout history, the burning of dead flesh would incite intense and overwhelming visions and paralysing terrors within those who would inhale the fumes. We then jump to the present, where we see siblings, Maribel and Anthony in a car driving towards their fathers grave so that they may pay their final respects. Anthony reflects on the lack of memories he has of his father, remarking how it feels like there is a hole there instead. Maribel is quiet and pensive, and clearly reluctant to be partaking in this journey, and for her the memories of her father are painful and something she would soon rather forget. Desperate to arrive at the cemetery and get this over with, Maribel encourages Anthony to continue to drive on, even though they will be arriving there late in the day. In the darkness of night, they arrive at the Burwood Memorial Park where their father is buried, pulling up to an ominous looking house. They are greeted by a rather odd-looking family, who welcomes them inside for a spot of tea before they go to visit the grave. The family appears to be somewhat unhinged and behaving in a rather weird and unsettled way. Something strange is afoot, and we see an bizarre encounter with the mother, Mrs. Malort, and one of her sons, revealing a hint of a dark plan involving Maribel and Anthony. They then decide to venture outside so that they may visit their father’s grave, however, things don’t go to plan, and Maribel and Anthony are swept up in a disturbing series of events, involving human flesh, experiments and their participation. 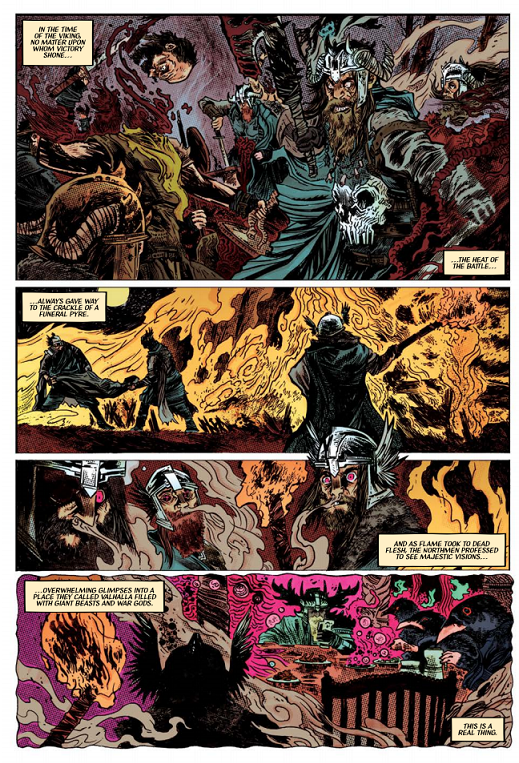 Well, this is certainly a dark and gritty horror tale, filled with all kinds of disturbing things. I love a good ol’ thrilling horror story, especially one that sets an ominous and spooky tone. Thankfully M.L. Miller does just that by fostering a deep sense of unease surrounding the fate of Maribel and Anthony. The family they encounter is beyond creepy, especially the son, and you know right from the moment we first meet them that they have disturbing plans for these two. I could sense things were going to take a dark turn, but what I didn’t expect was the deeply gory and confronting direction that the story takes, delivering a healthy dose of graphic scenes that can’t help but leave you feeling uncomfortable. I won’t go into details for fear of spoilers, but I will say that this is a fresh and original concept and I like the direction that this story abruptly takes towards the end.

I should also mention Maribel and Anthony and the interesting dynamic that their relationship brings to the story. There is a lot of mystery surrounding their past, and we only discover small snippets of it through their conversation in the car. Maribel clearly despised her father and has no loving or endearing memories of him, unlike her brother, who can’t remember anything about him. Whether this part of their past is relevant or not, I’m not too sure, but I’m intrigued as to what happened and why Maribel is so damaged. I also enjoyed the banter between these two, and found that it flowed in a way that reflected siblings at odds with each other. 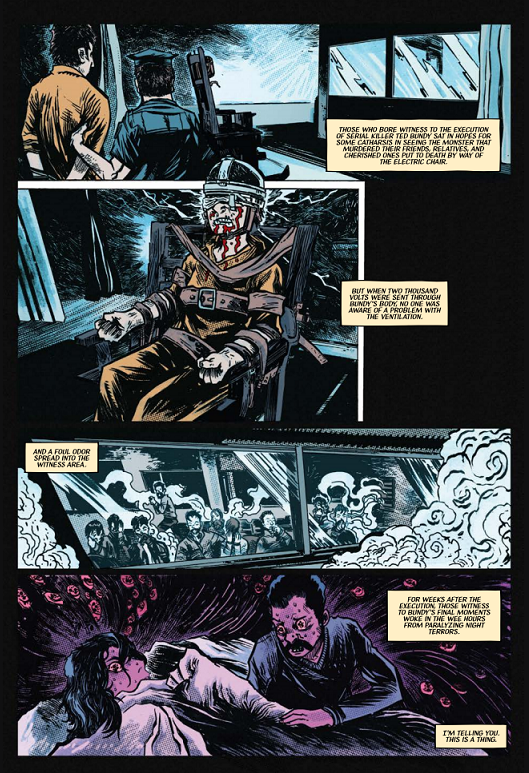 The art, by James Michael Whynot, is detailed and wonderfully expressive. I really love how he captures the dark and gritty nature of this story,through his textured linework and graphic details. I really enjoyed the more gory scenes, where we see torn flesh, sinews and guts. It’s gross and downright confronting, but I like that he embraces the full depravity of these monsters in such an graphic visual way. There is also an intensity to his art that I found works really well when capturing the harrowing and tormented expressions of the faces of these characters. Overall, the art is visually dark and somewhat grainy, with heavy inking used throughout the issue. The darkness contrasts nicely to the vivid colouring by Dee Cunniffe. The colours work wonderfully with the art, helping to heighten the overall gritty and intense tone of the story. Vibrant pops of colour are used, giving everything an almost electric, neon glow that is very eye-catching. 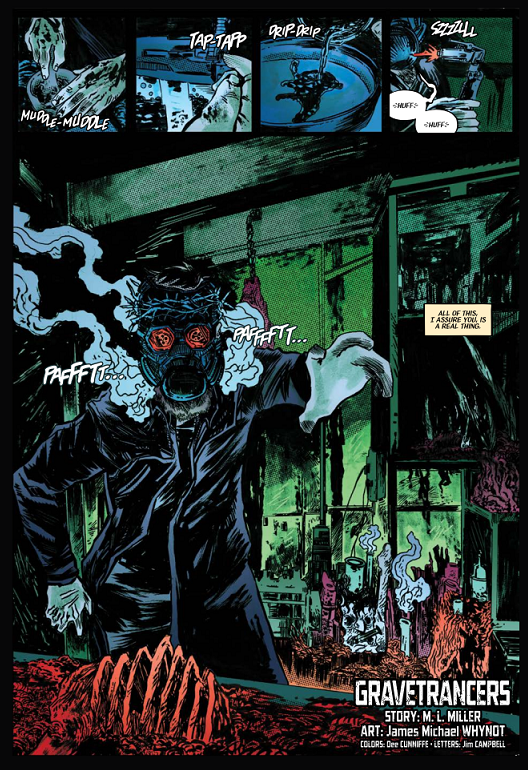 Overall, I thoroughly enjoyed the introduction to this tale. This is a horror story with a disturbing psychedelic twist, that will make your stomach churn and leave you feeling mighty uncomfortable. It has an interesting concept, and this combined with the detailed art makes for an engaging and gripping read.